I love the wide, elegant front courtyard at Poppy’s café at the Australian War Memorial. It seems almost too grand for a weekend breakfast outing on approach, but once you’re seated is a relaxing spot for a coffee and bite.

We were there for a post-Mt Ainslie climb brunch, partially inspired by Lisa Martin’s post describing it as her favourite Canberra hike last week. Most of the surrounding outdoor tables were filled with people we’d seen on the walk up or run down, many with children and dogs in tow. The cafe seats 110 people all up, so there were a lot of empty tables inside.

Don’t wait to be served. Despite the elegant surroundings, Poppy’s is essentially a cafeteria. Menus are on the counter just inside the front door. Once you’ve checked out the selection of ready-made options on display, you can grab a bottle of juice and order food, hot drinks and alcohol at the cash register, take a number and head back to your table. 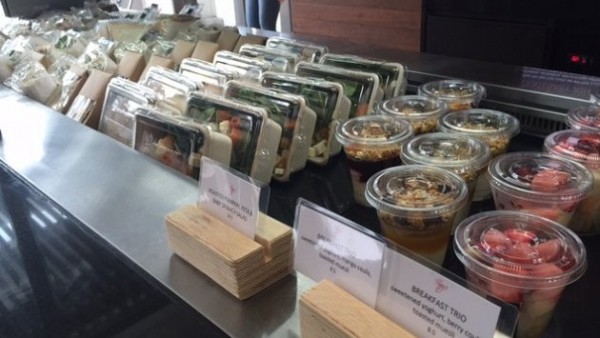 I opted for a juice and wished it had been freshly squeezed rather than bottled. The coffee drinkers had mixed reviews, one said it was very good, the other that hers was too cold.

I was tossing up between the vegetarian Mediterranean breakfast (your choice of eggs with mushroom, spinach, tomato, hash brown, grilled haloumi and sourdough toast) and stalwart French toast with maple syrup and bananas (hold the bacon for us vegetarians). One of the wait staff whizzed past with plates including hash browns and made the call for me. The potato cakes looked like the mass-produced, recently defrosted variety rather than freshly-made, so I opted for the French toast, which actually tasted like pancakes and was served with maple-flavoured syrup rather than the real stuff. The banana was great, though, just ripe enough.

The café, which was operated by Hudson’s Catering until recently, is now run by events, catering and business consultancy Create Consultants. Ex-Taronga Zoo catering boss Anthony Whitehouse is director and former Sydney Town Hall event operations manager Paul Foskett is general manager. Both have extensive experience in catering and events here and overseas. Chef Darrell Felstead has worked in Michelin starred restaurants in England and France and as executive chef of the GPO complex in Sydney’s CBD and the Three Weeds in Rozelle, both of which collected Sydney Morning Herald Good Food Guide chef’s hats on his watch. I suspect his expertise is more evident in the canapés at their functions than at breakfast time.

Create also operates the smaller Landing Café inside the War Memorial and overlooking ANZAC Hall. It is open from 10.30-4.30pm so is more of a lunch or snack spot, though it is also licensed so you can toast the ANZACs with a glass of sparkling or sav blanc.

The main café is named in honour of David “Poppy” Pearce. Trooper Pearce, who had joined the army in his 30s, was nicknamed “Poppy” by his much younger comrades because of his age. He was killed by a roadside bomb in 2007. His mates redeveloped the cafe area at their base in Tarin Kowt and named it Poppy’s in his honour.

Poppy’s would be a stunning venue for a drinks function in the summer (they can do cocktails for 200), and is perfectly positioned for the post-Mt Ainslie walk or pre-War Memorial tour breakfast. The underground parking is very handy too. That said, I didn’t rate the food or drinks highly enough to add this to my list of favourite breakfast spots.

Got a brunch recommendation? The Brunch Run prefers cafes near running tracks so we can burn calories before we treat ourselves. Next week, we’ll be at Black Pepper after a run around Lake Ginninderra.

Jenni Zimoch - 3 minutes ago
Taylor Rundell we haven't even had any cases a part from one or 2 in hotel quarantine in MONTHS too. And I'm not sure we ever... View
Taylor Rundell - 12 hours ago
In New Zealand they removed these types of restrictions once they were at covid zero, and other states are more relaxed - why... View
Opinion 21

Jeremy Thomas - 4 minutes ago
Jorge it’s 100 percent renewables in the ACT. In any case, they are so small the their emissions would be way lower than a... View
Jon Billows - 11 minutes ago
Kriso Hadskini Two way street mate. Plenty of "elderly" don't have consideration for anyone else either. People in glass hous... View
Jorge Gatica - 16 minutes ago
Jane Kennedy how is there no emissions when the battery is charged with coal fired power stations View
Property 1

Ol L - 30 minutes ago
But apparently according to Mr Barr there is no link between increasing landlords costs via land tax and any rise in rents? I... View
Food & Wine 13

FB - 44 minutes ago
Canberra is certainly an odd place. Where else could you start a business getting people to pay $10 for a toasted sandwich. I... View
Ivana Ryan - 2 hours ago
Toasted sandwich and a coffee 😋 Bojana Simic View
Christopher Rompotis - 3 hours ago
Hannah next brunch catch up? 🤔 View
Lifestyle 27

@The_RiotACT @The_RiotACT
Funding issues from the developer of Queanbeyan's long-awaited cinema are delaying the project more than three years after its DA was first approved https://t.co/41vCKCl5hx (18 minutes ago)