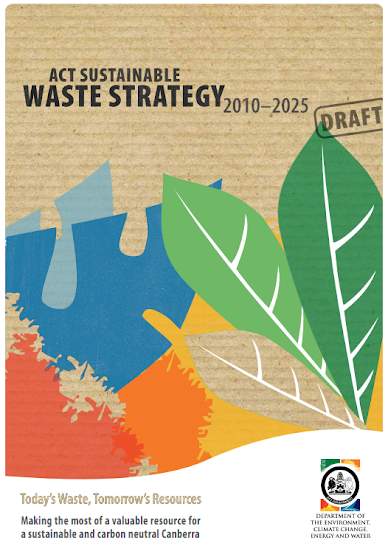 “This will allow the ACT to build upon its leadership position across Australia in the area of waste recovery.”

— a new materials recovery facility for commercial waste at the ACT Mugga Lane resource recovery centre; and,
— the development of a processing plant for organic waste from households and the commercial sector.

“A new plant for commercial waste would process between 40-70,000 tonnes of waste each year, meanwhile, a processing plant would recover approximately another 40,000 tonnes of organic waste per year from households,” Mr Corbell said.

“This strategy also identifies options to use energy from waste technologies to produce energy from some organic wastes such as wood, and contaminated paper, cardboard and food, where it can’t be recycled.

Interested parties should send their emails to environment@act.gov.au by 28 February 2011 (some might find this amusing for a strategy purportedly covering 2010.

If they were serious about waste management as a practical problem instead of as a quasi religious environmental form of observance, they would read the Productivity Commission’s excellent report on waste management:

It highlights that many of the current fashionable assumptions about waste management are not only fallacious, but counter productive. Also, it’s free.

I guess that takes it out of contention for consideration at least two counts.

How about a deposit on all take-away food containers? Slapping $1 deposit on McDonalds wrappers alone should reduce our waste and our litter by 90%.

Will they provide adequate resourcing [the the NoWaste branch] this time around? And what will they do with all that recyclable waste? For a while there, paper and cardboard from the yellow bins were going straight to landfill because the recycled paper market collapsed. I’d be interested to hear where that is up to now.

wouldn’t it be more effective to collect recycling bins weekly rather than fortnightly.
or have a recovery plant where all rubbish goes to the one plant and they filter out the recyclables? (they do have these and it capures something like 65% of all rubbish as recyclables)

Jennifer Elsey - 7 minutes ago
Such sad news❤ View
Judith Adraskan - 2 hours ago
A lovely man who will be missed. I worked with him as a colleague for over 20yrs & he was forever gentle, polite & kind. RIP... View
Opinion 110

ChrisinTurner - 12 minutes ago
I know people living in the inner north on huge-sized blocks who have been told they cannot subdivide. Seems the rules are ag... View
chewy14 - 1 hour ago
BJ, The outer suburb large blocks aren't being slated for densification, don't have good services and aren't as expensive. I... View
May Mac - 2 hours ago
"I think striking a balance is key." Yes. Not everyone who wants a freestanding house wants the work of maintaining a yard, s... View
Food & Wine 21

Donna Chalmers - 21 minutes ago
Marcia Baker it will not matter......it's still the same!!! View
Frank Arnold - 1 hour ago
It was always a family treat in the late 60s. View
Catherine Firth - 2 hours ago
Pauline remember visiting after a few lemonades🤣 View
Motoring 42

Not that long ago, my partner and I were part of the teeming masses of young people trying to get...
*Results are based on activity within last 7 days