The Futuro moves to the University of Canberra 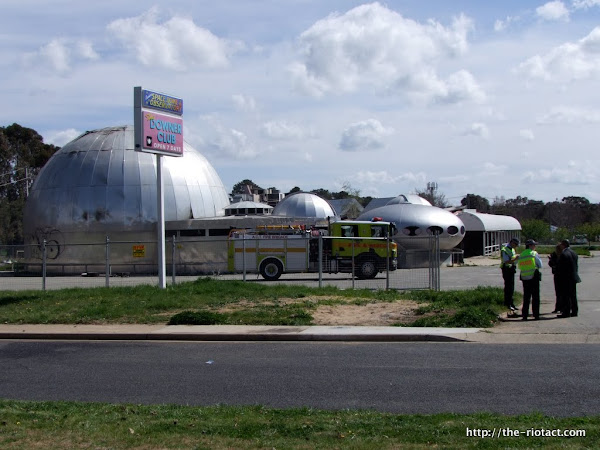 The “funny building what looks like a space ship” was last seen by me in the smouldering ruins of the Downer Club.

Today the Vice Chancellor’s blog at the University of Canberra informs us that the building was in fact a Futuro House and it has been relocated to UC:

The Futuro has been generously donated by the Dickson Tradies to the University and the costs of moving and installing it have been sponsored by Manteena. Its previous home was the Canberra Space Dome (Planetarium) and Observatory, where it was used for educational purposes until it closed in 2008. More recently the Planetarium buildings were destroyed by fire in September 2010.

There were approximately 90 Futuros built between 1968-1978 and only a handful remain across the globe. The one located at Dickson is one of the best known survivors in Australia.

The Futuro was initially established as a community project by the Dickson Tradies, who put the call out for a new home last year. The University, in consultation with the Finnish Embassy (the Futuro design is Finnish) and the National Gallery of Australia put in a bid to house the relic, which will be used as part of the university’s conservation and design programs.

The things we learn.

I was about to say that house used to be in Dobson Street, Watson. But having just looked on Nearmap.com, I see there’s still a round house on the block I was thinking of.

I have vague memories of going inside it pre-Tradies club back in the 60’s or 70’s, possibly in Fyshwick, and I always wondered where it had gone. So glad to see it has a new and appropriate home.

Larry Appley - 4 minutes ago
A publicity stunt from a former radio announcer? Who would have thunk? View
Nathan Lofthouse - 34 minutes ago
Why is it the tinfoilhat mob always say 'do some research' I don't need to research tiktok. its tiktok. I expect everything o... View
Carolyn Eade - 1 hour ago
This is crazy. Why do we have elections? Just wondering View
Property 2

Jess Aan - 19 minutes ago
Sally Tregellas Wodzinska i don’t think so 😢 and I think the former residents are in wright or Coombs out near Stromlo .... View
Property 25

Lori J Tas - 33 minutes ago
Sue Ellen since more people live there now, that really disproves your opinion that it's oldness was the appeal 🤨 the new... View
Nick Swain - 3 hours ago
The argument about Kingston Towers and the Carrington shows that Geocon has no idea about the Territory Plan (or is ignoring... View
Property 19

Vicki Nunn - 53 minutes ago
Rheyce Spears Have I missed something in the last almost twenty years? I thought Labor was in Canberra? Funny that housing in... View
Gregg Heldon - 1 hour ago
Not either. As stated. Take care View
Gregg Heldon - 1 hour ago
Clinton Berry why? Why don't you move to Victoria? It takes all sorts to make a society. It doesn't bother who votes for who.... View
Food & Wine 17

Laura Shelley - 53 minutes ago
I’m coming for the dumplings and staying for that adorable cardigan! View
Tanja Cummings - 3 hours ago
Leigh Zasiadczyk I think we should try this.. hoe about you Dallas N Olivia Massen? View
Heidi Dreyer - 3 hours ago
K how about dinner next week 😊 View
Food & Wine 5

James Shaw - 2 hours ago
Lynn Stape because some people are American?... View
Opinion 52

Lyn Mellier - 3 hours ago
Greg Stone That was just my opinion & I noticed many others think the same as me. View
Greg Stone - 4 hours ago
what benefits? We don’t get any of the ticket sales, costs of $1m+ per game to host, then add the fact they need exclusive... View
Lyn Mellier - 4 hours ago
Surely the benefits of hosting some games in the ACT would outweigh the costs? What a pity to pass up such an opportunity. View
News 1

Jason Cannon - 3 hours ago
Elroy and Tania, are you paying for the taxi so the elderly people can sit in that park? Because the road will be pretty hard... View
Property 16

Capital Retro - 4 hours ago
There was a time when an Arts Degree was an assurance for a prospective employer that the graduate seeking a position was wel... View
show more show less
*Results are based on activity within last 7 days

From every angle, the architecturally designed home at 13 Bromham Street in Forde has a Finnish-inspired form, with Finnish functionalist architectural...
Food & Wine 17

The Canberra Liberals have thrown the future of Light Rail Stage 2 into doubt by refusing to commit fully to...
Opinion 52

Despite unbridled delight among football fans after Australia and New Zealand won joint hosting rights for the 2023 Women's World...
News 46

Travelling overseas is off the cards for a while yet but tomorrow (1 July) you can experience a little slice of...
News 18

The Canberra Liberals' Mark Parton has been kicked out of the ACT Legislative Assembly for refusing to remove a TikTok...
Property 19

Overdevelopment in Canberra is shaping up to be a key election issue after it was revealed that the lion's share...
News 32

Two of Canberra's fastest-growing areas need a greater police presence including their own stations to combat rising levels of crime,...

@The_RiotACT @The_RiotACT
@NatGalleryAus is having a mega-clearance sale and it's your chance to pick up memorabilia from great NGA exhibitions as well as spectacular pieces from local artists https://t.co/iA3TbWyTff (25 minutes ago)

@The_RiotACT @The_RiotACT
There’s something to suit everyone in our top picks of things to do this weekend, from music to dance to trivia to gardening https://t.co/MhJpvE9Igk (1 hour ago)

@The_RiotACT @The_RiotACT
The reopening of Queensland and South Australian borders and the settling of a new owner for Virgin Australia is putting more flights on the board at Canberra Airport as it reopens facilities to meet expected demand https://t.co/F6Kef3OEqj (3 hours ago)