“THE HOUSE OF BERNARDA ALBA” Comes to Canberra 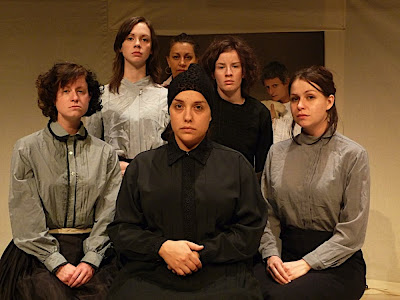 The play is the story of a desperate and tyrannical widow, Bernarda, whose five daughters yearn for freedom – the freedom to see, to dream, and to love. The play is strongly political, written against the backdrop of the ascendancy of fascism and Franco during the Spanish Civil War. Lorca was murdered by Franco’s forces not long after he completed Bernarda Alba, and never saw the play performed.

Hare’s new version was first performed at the National Theatre in 2005 to rave reviews, and moonlight’s production will be the first time this version has been performed in Australia. moonlight is proud of its strong record of performing important modern plays, from 2007’s season including productions of Steven Berkoff’s East and West and 2008’s performances of Edward Albee’s The Goat and Sam Shepard’s True West. The House of Bernarda Alba will realise Lorca’s stark, devastating play with a cast of Canberra’s finest actresses.

Offprompt reports that Teatro Vivaldi Dinner and Show Packages can be had for $50, to book a Vivaldi package call 6257 2718.

UPDATED: A review of opening night is now online

Capital Retro - 17 minutes ago
Oh, the perils of virtue signaling. It would be hilarious (like an episode of Yes Minister) if it didn't mean this will cost... View
Opinion 77

Nick Savino - 52 minutes ago
I prefer making coffee at home don’t see the point of cafes everyday View
Nick Savino - 54 minutes ago
Stephen Page-Murray correct the food is rubbish I complained so many times that the food manager and his 2 mates came to my r... View
Amy Nelson - 1 hour ago
Sashika Mendis we loved living there. Now living in Melbourne, a “most liveable city”, we question why more people don’... View
News 5

@The_RiotACT @The_RiotACT
Planning authority has rejected the controversial W2 high-rise proposal in Woden but it is not going away https://t.co/FlTw7zPKZc (20 minutes ago)