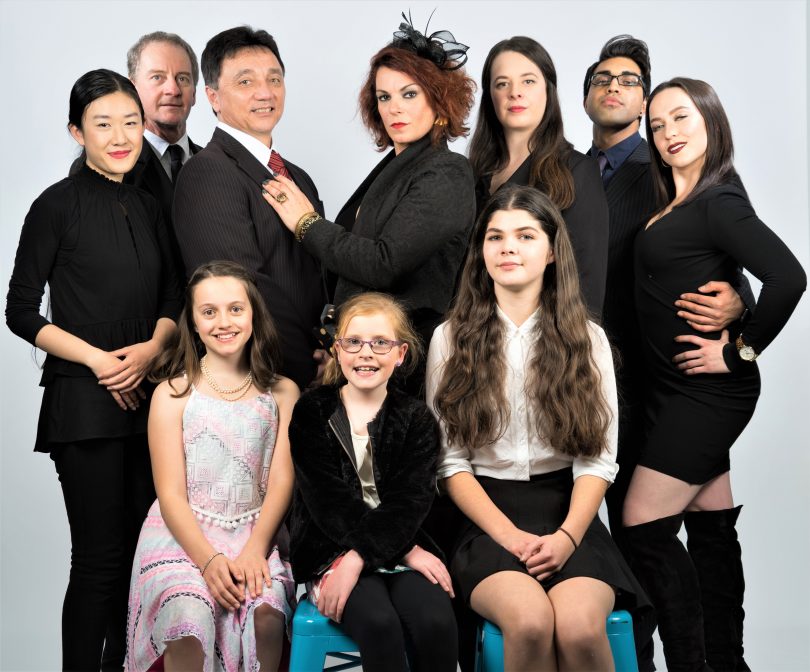 The cast of the comedic play ‘The Inheritance’. Photo by Reld Workman.

If you love a bit of family drama with the joy of making fun of the mega-rich thrown in, then a new Canberra play ‘The Inheritance’ may be just your thing.

Opening at the Belconnen Community Theatre on Wednesday August 16 at 8 pm, the play promises to tickle your funny bone as you watch the goings on of the rich and dysfunctional.

One wonders whether there will also be allusions to real-life Australian dynasties given the lead character is named ‘Gina’.

According to the storyline provided by Budding Theatre, there is plenty of intrigue.

“When billionaire Les Essington dies while having sex with his mistress, his estranged daughter, Gina, is forced to put her medical career on hold to come home for the will reading.

“Gathering at the office of long-time family lawyer, John, the reading should be straightforward.

“However, proceedings quickly unravel as Gina’s sisters, socialite-princess Emily and stern CEO Amanda, descend into a war of words.

“Things get even trickier when her distraught mother, socialite Di, locks herself in the bathroom and refuses to come out.

“Forced to communicate with her siblings for the first time in years, Gina begins to realise that her father, though not a perfect man, was the lynch-pin that held the family together. And now that he is gone, her family is on the brink of falling apart.”

To find out more you’ll need to watch the play which has a limited season of five performances. It runs from 16-19 August at 8 pm with a matinee on the Saturday at 2 pm.

‘The Inheritance’ is directed by long-time Canberra theatre maker Cate Clelland, the director of Canberra Repertory Society’s ‘Noises Off’.

Gould, who has a Bachelor of Creative Communications from the University of Canberra, has since gone on to write over 40 ten-minute plays which have been performed throughout Australia and overseas, including in New Zealand, America, India, the Philippines and the United Arab Emirates.

Last year, his ten-minute play ‘Stargazers’ was a finalist in Short+Sweet Hollywood.

The presence of a local playwright, director, cast and crew matches with the aims of the Budding Theatre which says it is devoted to showcasing budding talent in Canberra. The company was founded by Kirsty Budding in 2014 and stages theatre with and for adults, young adults and children.

Tickets to the play are $32.50 for adults and $22 concession. They are available at www.trybooking.com/OWIU