UNWRAP ME; Kirsty Budding – the art of charity

It’s well said that the true measure of a humane society is how well it treats its most vulnerable. For me, just as true is the idea that humanity’s narrative and values are central to the arts. After meeting with Canberra’s Kirsty Budding, it is clear that she not only combines these ideals in her aesthetic quests, she shares her vision, brings people along with her, and gives with grace the gift of theatre.

Produced by Budding, UNWRAP ME is a theatrical extravaganza showcasing well-known and emerging Canberra theatre-makers. Earlier this year Australian playwrights were asked to create a piece of theatre with one stage direction: a character enters carrying a Christmas present. Since then Budding Theatre has sourced directors, actors, musicians, and many other creatives to produce a line-up of beautifully bawdy and risqué theatre with an auction at interval offering treats from local businesses, signed memorabilia from the cast, and apparently a bit of hanky panky under the mistletoe – the show is not suitable for children!

Budding’s aim is to raise $5,000 for two charities close to her heart: Doctors Without Borders who assist populations across the world regardless of race, religion, creed, or political convictions. The other charity is World Animal Protection whose mission is to create a world free of cruelty for animals. All of the profits will be donated to these charities – half each. 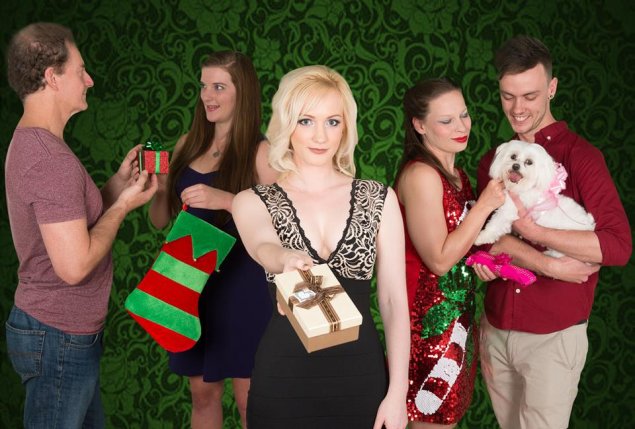 Kirsty possesses two strengths rarely combined in the art world: not only can she create art, but she can administer its creation. She exhibits a humble charm with a keen intellect which makes her an excellent communicator, a gifted and effectual teacher and an insightful, intelligent director of theatre and music, sensitive to those with whom she works and teaches.

Budding’s talent is remarkable and formidable. Her gentle, serious and utterly committed approach to the creation of her art indicates a rare ability and a talent to communicate her vision to other members of the creative team.

Above all, Kirsty is passionate about her work. She strives for excellence and expects a similar dedication in others. She possesses a quiet and sensitive patience, and pursues her vision with integrity and imagination. She is constantly searching for new forms of expression, and does not avoid experimentation and risk in her exploration.

I believe that Budding has the talent and ability to make a major contribution to theatre in Canberra, and I implore Canberra to support this remarkable initiative – Unwrap Me.

If you would just like to make a donation to this charitable initiative please email media@buddingtheatre.com

4 Responses to UNWRAP ME; Kirsty Budding – the art of charity
Filter
Showing only Website comments

Great! It’d be great if some Canberra businesses chucked in some more support too! Maybe some law firms…

Great article about an incredibly talented and dedicated lady.

Awesome article, but doesn’t quite capture how awesome Kirsty really is.

Emily Grace - 18 minutes ago
Martin McMaster True. What about the casual dates, long distance relationships etc? Are they meant to be the "oppressed" or "... View
Rachel Lemon - 27 minutes ago
Karen Baldwin ask them ‘which husband?’ Their faces will be priceless! 😂 View
Linda Stapleton - 37 minutes ago
no matter what perspective you view this from, there will always be someone who will tell you it is incorrect... not everyone... View
Food & Wine 7

@the_riotact @The_RiotACT
Draft terms of reference for the #OrroralValley fire inquiry reveal it will likely explore the operation of an Army #helicopter, the light of which may have sparked the devastating #blaze, and the actions of its crew https://t.co/eWk0EVq9B2 (34 minutes ago)