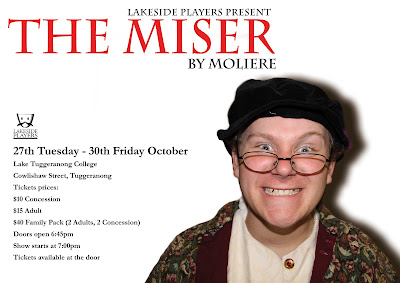 The Lakeside Players are a troupe of Lake Tuggeranong College graduates, who have mentored the college’s students in their drama productions for the past five years. They will now perform together for the first time in Moliere’s ‘The Miser’ – a story of love and deception told with wit, charm and comedy.

The Lakeside Players won the 2008 Canberra Young Citizen of the Year group award for their role in mentoring the college students.

Sadly, in July 2009, one of the original Lakeside Players, Chris Koukouzelis, who was to be the director of the first show, passed away after being diagnosed with bowel cancer less than a month before.

This show is dedicated to him.

According to Harpagon money is the most important thing in life. Nothing can compare, not honour, joy nor love, only wealth. When he gets in his mind that there is a penny to be made by marrying off his son Cléante, his daughter Élise and indeed himself too nothing can get in the way of the transaction. This doesn’t matter for the son and daughter however, as they foul their father by falling head over heels for suitors of their own.
Joined in this predicament by the mischievous La Flèche and the elegantly cunning Frosine what could possibly go wrong?
Someone’s getting married tonight, but as the children fight to follow their own hearts Harpagon strives to maintain his wealth and nobody is quite what they seem.

Join the Lakeside Players in their debut performance full of wit, charm and comedy by one of the finest Commedia writers who ever lived.

Tom Worthington - 7 minutes ago
We need a new railway station, but it would not be cost effective to put it in the city centre. It could be instead located a... View
News 53

chewy14 - 12 minutes ago
JC, simply not correct, I'm not anti anything other than bad governance and poor decision making. Particularly when the decis... View
Ashley Wright - 2 hours ago
Julian Sortland believe already decided Canberra will use batteries rather than supercapacitors and the original vehicles are... View
Ashley Wright - 2 hours ago
Susan Williams that’s good because light rail whilst using similar vehicles is different to a tram way in that it is design... View
Lifestyle 41

Nancy Olsson - 25 minutes ago
Fantastic display hmmm will visit next year. View
Sue Brooks - 2 hours ago
So beautiful. Looks like a painting. View
Heather Alexander - 4 hours ago
LoveTulip Tops gardens, so glad you have posted these wonderful pictures. View
Opinion 32

Frank Koch - 33 minutes ago
Margaret Freemantle no I don’t but I know of her and she has done well so we shouldn’t begrudge her in any way. Most peop... View
News 17

Albert Jacka - 1 hour ago
Thought that would have been heritage listed for sure View
Adam Beams - 3 hours ago
Geoff White the water really isnt that deep around there so wouldnt have caught much other than bait fish. View
Graham Hannaford - 4 hours ago
Geoff White That's a cracker of an idea View
News 20

@The_RiotACT @The_RiotACT
Next week's ACT #Budget will include $15.2 million over four years to help modernise the ACT #Ambulance Service, including the acquisition of five new low-emissions vehicles https://t.co/Z4Fp6TE8HZ (56 minutes ago)