The Last Prom at Smith Dick 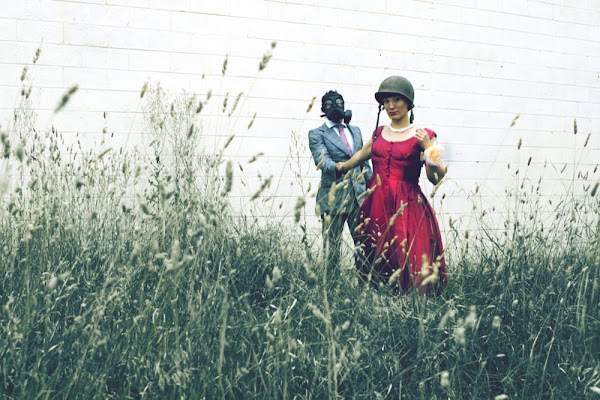 As part of the You Are Here extravaganza engulfing Civic next month Nick Delatovic is throwing The Last Prom which on Facebook is described like this:

March 11th 2011: They thought it was going to be an 80s Prom Night like any other. How were they possibly to know that the frizzy-permed festivities would be interrupted by a zombie plague, metoer collison, flu epidemic, alien invasion and the second coming of Jesus ALL AT ONCE!

There were break-ups. Make-ups. Extinction-level tidal waves. Jesus took a bet from his jock friends that he could make-over the geeky Satan into the Prom Queen. And the whole night culminated in a performance by THE LAST PROM, the only high school dance band that features the Antichrist and the Four Horsemen of the Apocalypse in it’s line-up!’

The Last Prom is the opening night party for the You Are Here Festival, an alternative festival happening in the vacant shopfront spaces in the heart of sexy Civic. Come along and enjoy a disorienting night of bands, DJs, girls crying over boys and boys fighting over girls. Make sure you dress the part, Prom Night theme, Apocalyspe theme or a brilliant melding of both!

Be mindful, the party will be ending at 11pm sharp due to the End of All Things. You will have 2 hours and 2 hours only to party like your last chance!

FIRST LINE-UP ANNOUNCEMENT- The Forces of Entrophy are proud to announce our first confirmed acts for this last night of all nights:

New Weird Australians ASSASSINS 88 will jangle your ribs and scrape off your cares!

And of course, The Ones Whose Coming Heralds The Final Fire, pentagram-powered supergroup THE LAST PROM! Featuring Members of Julia and the Deep Sea Sirens, The Bluffhearts, The Missing Lincolns, One Foot in the Gravy, Finnigan and Brother, Standing Waves, Big Score and The Heavenly Host of Final Judgement.
SECOND ANNOUCEMENT COMING SOON!

SECOND LINE-UP ANNOUNCEMENT- The entrails have been read, and it is your unavoidable destiny to share your final evening with the following minions of Styx:

Fresh from atomising the Phoenix Bar as part of the Hey Dad, Can I Get a Ride From Josh’s Otherwise It’s, Like, Two Buses festival, the incomparable PARTY BUS will be binding your souls to their electronic will!

Lovecraftian giants YETI will be burning through the shadows of myth and providing last communion for the damned!

And most importantly, each band set will be bridged by the chaos-bringing 10-minute dance parties of DEAD DJ JOKE!

More info to come, and remember, The End is Nigh!

I just can’t wait to see the costumes. I mean, how do you begin to prepare for something like this? I don’t think a day at the parlour is going to help, or getting my hair permed. Boot camp seems appropriate but maybe too far?

ok, l’ll pick the girl, and you’ve got two weeks to turn her into the prom queen.

I am legitimately incredibly excited for this event. I hear Jesus himself will be attending.

You can be young, and hip, and cool, and shit, or whatever the current terminology is, as long as you’re early. Only 100 human beings will be allowed to attend THAT INCLUDES DATES

What did JB say about Amanda Palmer? Sounds like a thing?

Damn, I wish I was young and hip, or cool, or shit, or whatever the hell the current terminology is, again.

Russell Nankervis - 2 hours ago
I wish I could donate but alas. I am too gay View
Kriso Hadskini - 5 hours ago
If they would just let go of the 1990's living in the U.K rule my husband and I would regularly donate. View
Community 40

dashing1 - 2 hours ago
Thip's Thai in Belconnen, for me. Humble setting, delicious food always served with a smile. View
News 7

John Vallance - 18 hours ago
Lucas Anasdow um.... because like all vaccines it goes through testing. once testing and trials and results are reviewed then... View
News 2

Brent Carlisle - 20 hours ago
I was shearing in the 1980’s and we where talking about how bad the conditions where then and nothing has really changed. View
show more show less
*Results are based on activity within last 7 days

Woden's landmark but mothballed Lovett Tower will be refurbished to accommodate a mix of uses including a total of 300...
Community 8

Some plots of land are best used by harnessing the powers of an architect to maximise the best views and...
Opinion 39

@The_RiotACT @The_RiotACT
If you're working from home and experience domestic or family violence, does workers' compensation cover you? @BALLawyers provides an insight into the issue https://t.co/QzvLs9QFxE (1 hour ago)

@The_RiotACT @The_RiotACT
The sale of NFF House for $7.7 million reflects the high demand for quality commercial properties, especially in the Parliamentary Triangle https://t.co/C8vWUd1szQ (4 hours ago)

@The_RiotACT @The_RiotACT
The ACT is expanding vaccine storage facilities at the Canberra Hospital in preparation for the arrival of the Pfizer COVID-19 vaccine https://t.co/GdyfQLw7tE (4 hours ago)