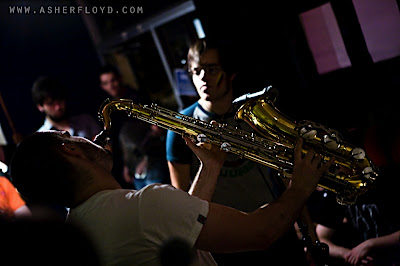 On Friday night a strange confluence of Brumbies and a tired girlfriend meant I could only catch about an hour of the Missing Lincolns CD launch at The Front in Lyneham. Which was a shame because the hour I caught was a great party.

The strength of The Front is its tiny nature, which means a crowd that would make the ANU Bar look empty spills out into the street. Party planners take note, small is generally better.

The strength of the Missing Lincolns on the other hand is a powerhouse songwriting duo of Luke McGrath and Nick Delatovic, the Morrissey and Marr of the local scene (which is not to take anything away from Chris Gleeson on drums who rounds out the look and sound of the trio nicely). This unstoppable force of songwriting is why they were launching a two disk set with a total of 28 top notch songs.

The sound is the basic old school rock which is so popular at the moment (think Kings of Leon, but less dull), it’s eminently danceable, but also has lyrics which reward careful listening.

Having paid $20 of my own hard earned for the double album I’m very glad I did.

You can have a listen yourself on their Myspace page and if so inclined get in touch with them to get a copy of your own.

Photography of the night is courtesy of the amazing Asher Floyd.
Slideshow below.

UPDATED: Apparently you can buy a copy of the album from Landspeed Records in Garema Place.

think Kings Of Leon, but less dull ??? big call considering they had the number one song for 2008.

In an absolutely meaningless poll. Kings of Leon represent everything that is awful about major label ‘music entertainment’.

think Kings Of Leon, but less dull ??? big call considering they had the number one song for 2008.

Well Luke’s going to Cairns for two years, so you’ll have to wait a bit…

I have to go and see these guys. Anyone know when they are playing next?

I also think I’ll grab a copy of the record.

i agree – it was an inspiring local gig, and all the better from being held at the Front.

whatwik - 1 hour ago
There's certainly a nuclear reaction from the usual suspects here any time renewables are mentioned. View
Futureproof - 2 hours ago
Nuclear - the Greens say no New hydro dams - the Greens say no Windfarms in remote areas - Bob Brown says no... View
nobody - 2 hours ago
According to the World Nuclear Association, in April 2020 there were 440 operating nuclear power reactors around the world, 5... View
Community 8

whatwik - 1 hour ago
Hope they were able to find their own towel (not to mention undies) more easily than this lot - https://www.abc.net.au/news/2... View
Community 47

David Keir - 1 hour ago
Virginia Loizou sounds like you’re the one whinging champ View
Virginia Loizou - 2 hours ago
David Keir funny this isn’t a pie. You don’t get less because they make something specific for women to feel safer around... View
Louise Trott - 3 hours ago
Mark Heinrich Well said. An intelligent response. View
Property 26

Futureproof - 2 hours ago
I ride my bike around LBG every weekend. Often I have to pull off to the left when the lycra crowd are riding two abreast, ba... View
James Forge - 3 hours ago
Warwick Bradly I work along there. I don’t think it an inconvenience I just wonder about these peoples regard for their own... View
Warwick Bradly - 3 hours ago
I've driven that road many, many times. I don't think I can ever remember a cyclist on there, or if there was, it can't have... View
Breaking 3

Dan Gain - 6 hours ago
Have you fully recovered from when you got "torn" from that probe? View
News 7

nobody - 6 hours ago
Hold on. The ACT Smart website currently lists a roof-top solar subsidy program of 50% or up to $2,500. So the ratepayer/taxp... View
rsm1105 - 7 hours ago
It would be good to understand how 250mw stacks up if the wind is not blowing and the sun is not shining. View
News 20

Daniel Duncan - 7 hours ago
May as well rush the robot work force in as no business will be able to run long term. Next you will want a UBI.. View
show more show less
*Results are based on activity within last 7 days

The Canberra Liberals have lambasted the ACT Government for focusing on issues that don't affect Canberrans and trying to turn...
Community 25

@The_RiotACT @The_RiotACT
Did you have trouble using ChooseCBR vouchers? Or were the funds exhausted before you could try them? The Canberra Liberals have called for an audit of the scheme so we know where the $2 million was spent and who benefitted https://t.co/vhUbQ6PAT3 (19 minutes ago)

@The_RiotACT @The_RiotACT
Archie Tsirimokos is one of the ACT's top legal professionals and chair of the Canberra Business Chamber, but there's more to him than meets the eye https://t.co/BtjpRtpks0 (2 hours ago)