The National Museum by night. Images of Canberra 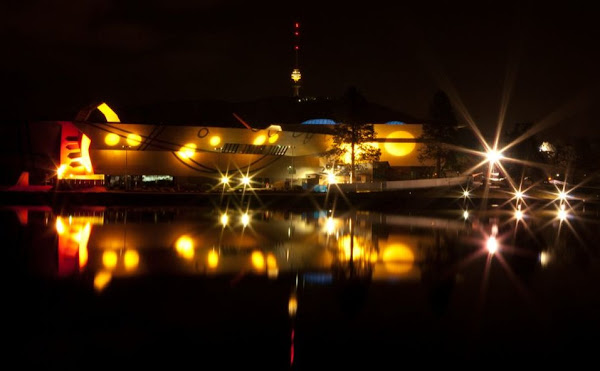 Konazz sent this in last night with this note:

Thought this was an ok photo I took tonight.

A pleasant 2 degrees while shooting Lots of photos ruined by my breath ending up on the lens (arrgghhh).

11 Responses to The National Museum by night. Images of Canberra
Filter
Showing only Website comments

This building – indeed the whole concept of a Museum of Australia – was only ever intended as a left wing revenge on the Howard government. The Hawke government initiated the project in the late 1980s and appointed an Aboriginal woman to head it. The intention was to open the project on January 1st, 2001 which was the Centenary of Federation and the intended first day of the Republic of Australia.

The Keating government planned to hold a referendum on the republic in 1996 or ’97, Aboriginal activist Lowitcha O’Donoghue would be appointed as Australia’s first president and the day would be a symbolic start of a new era.

As we all know, Keating lost office in March 1996, the Howard government scaled down the Museum of Australia project and the (delayed) republic referendum in 1999 was defeated. The Aboriginal woman remained as head of the Museum of Australia and when it opened in late 2001 the building was more a display of leftist pet causes than anything to do with mainstream Australian history. I remember during my first visit saying to my partner “If I see one more picture of a protest march I’ll scream”.

Many people complained about the material and the Howard government eventually managed to sack the Aboriginal woman and bring in a more representative head and governing body. Most of the leftist crap was cleansed from the Museum and it became far more representative of Australia.

I note in the Crimes last week the Aboriginal woman playing the race card as the reason she was sacked. Just goes to show that she – and others of her ilk – still don’t get it.

It is a glorious building. Not all architecture has to ‘fit in’ as if it were ashamed of itself.

(Although I agree with the criticisms of what’s inside… it’s underwhelming to say the least).

The building itself has somewhat grown on me over the years, but I have never gotten over being told at a public consultation display that it will be low key and with strict height limitations and the foreshore trees will be preserved so it will sit very comfortably and discreetly on the peninsula . . and then they put that orange skateboard ramp thing on top which you can see for miles!

Nup, I like it, too. Awesome bit of architecture.

Oh, and to Konazz: beautiful shot. You should think about http://www.harrisonartshow.weebly.com

Sigh – I wish someone would blow it up!

Maybe we could ask Kate Carnell…

Nuke it from orbit. It’s the only way to be sure.

(Although I agree with the criticisms of what’s inside… it’s underwhelming to say the least).

I thought they’d got rid of the roomsful of alleged aboriginal axes? (rocks).

Sigh – I wish someone would blow it up!

Jodie McAlister - 3 minutes ago
Pure Gold! View
Lindi Loo - 3 hours ago
Are these two 'paid actors'? If not, they should be! Brilliant 😂👏... View
Emily O'Shea - 3 hours ago
Jen O'Shea watch the video in this View
Opinion 10

Sebastian Macri - 20 minutes ago
Wondering what that may achieve. Covid is here and not going away... View
Sarah Emmerson - 31 minutes ago
Shane Jasprizza that’s exactly my point too! View
chewy14 - 58 minutes ago
Even though I don't agree with the proposal, your example it not close to being a good comparison. You eating yourself to dea... View
News 1

Sam Oak - 31 minutes ago
What about the hazards these birds create for motorists. Hope the driver is okay and the damage to his car was covered by ins... View
Sport 133

Eric Tenthorey - 38 minutes ago
Alan Vogt interesting...in Montreal at mt rigaud you had to pay to access the trails...no lifts. View
Alan Vogt - 1 hour ago
I have travelled and raced at a good number of mountain bike destinations in British Columbia (including Squamish, Whistler,... View
Jim Reid - 3 hours ago
ACT Govt doesn’t need any more $$ they’re literally the worst financial managers and they wouldn’t be transparent as to... View
Opinion 19

chewy14 - 48 minutes ago
4 ACT senators? I must have missed that change, haha. Although I agree with you about the base politics and disingenuous argu... View
Acton - 3 hours ago
Zed is only one of 4 ACT senators so why don't one of the others sponsor a bill? It can't just be the fault of the Morrison L... View
News 42

Renea Hazel - 1 hour ago
Judith Devitt he is an excellent school principal, this is disappointing :( View
Kieran Angus - 2 hours ago
Rade Kosa yeah and? We get boosters of a bunch of vaccinations? Tetanus is a good example. View
Rade Kosa - 2 hours ago
Kieran Angus one word boosters. 😉 View
Lifestyle 10

@the_riotact @The_RiotACT
The ACT Property Council and @MBA_Canberra are concerned that the Territory's #construction sector - which they say could lead the economic recovery after lockdown - is suffering from a loss of skilled #workers to Melbourne and Sydney https://t.co/VM8wwQwYsS (51 minutes ago)