The National Trust (ACT) Centenary of Canberra Rally is coming 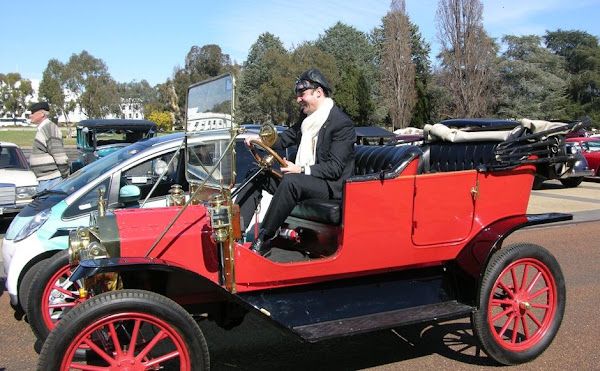 Andrew Barr has been having fun with old cars this morning and has launched next year’s “National Trust (ACT) Centenary of Canberra Rally”.

This morning I launched the National Trust (ACT) Centenary of Canberra Rally, which will take place on October 19-20 next year.

The Rally celebrates a number of significant milestones in the automotive and maritime history of Australia, the ACT and NSW, and is sure to excite motoring enthusiasts from Canberra and the surrounding region.

More than 1000 vintage and modern cars will depart Jervis Bay on October 19, and travel via Tarago, Bungendore and Queanbeyan, arriving in Canberra that evening. The next morning the cars will travel from Exhibition Park, doing a cruise down Northbourne Avenue, and ending on the lawns of Old Parliament House for a vehicle display and entertainment.

Vehicles will come from right around Australia, and the event is open to all ages and marques, with vehicles as old as Canberra itself – such as the Model T Ford – set to take part.

The ACT Government is proud to be supporting the National Trust Centenary of Canberra Rally through the Community Centenary Initiatives Fund. The $1 million fund is supporting more than 50 initiatives, events and activities to be held throughout next year.

[Photo courtesy Andrew Barr’s office with this note: “Andrew with an old-school cap and goggles in a Model T Ford from this morning”]

With luck they’ll be in Canberra in time for the January 2014 Summernats….

What are solid rubber tyres like for doing burnouts?

I’ll assume the matching fire extinguisher is an optional extra?

Ugh, they’re going to try and pimp that MiEV piece of crap as a good investment.

I’ll assume the matching fire extinguisher is an optional extra?

Spiral - 25 minutes ago
How silly. Surely they would be better if she keeps her position. A record like that would be great ammunition to use against... View
News 4

HSewell - 2 hours ago
Genuine question: why should we pay attention to a self-appointed self-named group like the "Lake Burley Griffin Guardians"?... View
Daniel J. Fitzpatrick - 6 hours ago
This needs to be done well. As Parkes way completely ruined the integration of the lake to our city we need to make sure in d... View
Gregg Heldon - 17 hours ago
I don't have an issue with development in the area. Having a park stop dead at an almost never used car park is a waste. Howe... View
News 2

Acton - 2 hours ago
Will resisting arrest constitute assault against a police officer? What if you resist arrest while at a peaceful demonstratio... View
Gregg Heldon - 5 hours ago
It's the ultimate disrespect, isn't it? And should be treated as such. The real question is, will the court protect those who... View
News 12

Warwick Alsop - 3 hours ago
I don't disagree necessarily, although we do still have a guaranteed full week of work that isn't just cancelled on a whim by... View
Archie Mac - 6 hours ago
The amount of young people in Canberra who are given an unpaid ‘trial’ needs to be investigated too View
Peter Major - 17 hours ago
Sounds good, now drop the casual loading that they receive above the award rate to offset forgoing the benefits View
Opinion 2

Acton - 5 hours ago
The Greens fail to practice what they preach. The voices of the community are routinely ignored by the Greens/Barr ACT Govern... View
News 22

Adam Briscoe - 6 hours ago
Must be some sort of election on the cards. View
News 17

Gerard McMahon - 16 hours ago
How about building a new Kings Hwy like we have needed for many years. Bypass Bungendore and Braidwood and save the trees? View
News 2

Shane Westmore - 21 hours ago
the whole mountain should be open really... if you're skiing or boarding closer than 1.5 metres to the nearest rider, you're... View
show more show less
*Results are based on activity within last 7 days

Property behemoth Geocon has been accused of putting profit before children's lives by refusing to compromise with the YMCA Early...
Property 5

The elegance of 1920s Ainslie reflected inside and out

The home at 4 Alt Crescent in Ainslie was constructed in 1926 and is a prime example of the Garden...
*Results are based on activity within last 7 days

It was labelled a white elephant early on, by a former Labor chief minister no less, but now the temporary...
Best of Canberra 87

@The_RiotACT @The_RiotACT
With lockdowns easing, life is slowly returning to normal. To help discover what's on, the ACT Government has launched RISE Canberra - your new home for experiencing local events https://t.co/0OBQBv40Ui (48 minutes ago)

@The_RiotACT @The_RiotACT
Chief Minister Andrew Barr has flagged further support for the hospitality sector when the JobKeeper and JobSeeker programs end in September https://t.co/Q7ailpKZxf (3 hours ago)