The Next Movement. Canberra’s hip hop at it’s finest. 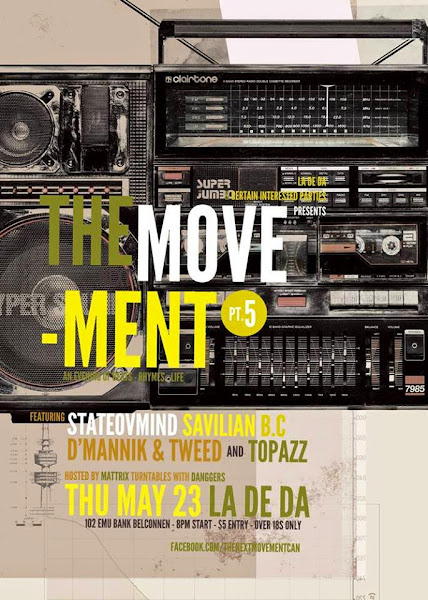 It’s time we got back to basics in Canberra. We’re about getting organised, thorough and providing as much help to upcoming hip hop artists as we can. We’re putting on a series of events in order to bring the music back to the capital, and inject some hip hop sensibilities into our town. More opportunities for cats straight out of the bedroom, and those of us who have been hibernating. You’re part of it already, so here’s your chance.

The Next Movement Pt. 5 will be on Thursday, May 23rd, and we’ve got a very talented local line up for you. Please see below:

STATEOVMIND
In a little over 12 months, Stateovmind has released two EP’s, supported numerous touring artists and taken out the 2012 JJJ Unearthed ‘Groovin The Moo’ Canberra slot. Since then, he has returned to the studio and is currently putting the final touches on his second solo EP ‘Better Than Postcards’ which is due for release in a little over a month. Stateovmind always brings a high energy show and is looking forward to joining what should be a memorable TNM Part. 5

SAVILIAN
Savilian is a 24 year old Hip-Hop artist from the Central Coast of NSW. He has been writing and performing for 7 years. In 2009, he released his first EP under the alias ‘Sureel’. In early 2012, he dropped his mixtape, ‘Kid or Koncept’ under the name Savilian, His most recent EP, ‘Feels Like Now’ was released this year via itunes. Savilian has performed at Big Day Out, supported Pez and Diafrix, and is gearing up to support Spit Syndicate in May.

B.C
B.C is a rapper from the North Coast of N.S.W. With a love of performing, B.C never fails to impress with his energetic, poetic and unpredictable live shows. Despite being a new name to the scene, B.C comes to the mic with the evidence of many years experience. Combine this with his passion and spontaneity, and you’e got yourself one hell of a show.

D’mannik & Tweed
Canberra locals D’mannik (MC) & Tweed (DJ/Backing vocals) have been collaborating on projects since 2011. After spending most of their time producing and recording other Canberra and Melbourne acts, they decided to join forces for a live-show, spending less time in the studio and more time on their own creation. D’mannik and Tweed bring a diverse sound, combining elements of the ol’ school with the sounds of today.

TOPAZZ
19 year old Topazz has been writing songs since the age of 16. His first release, ‘Stopping the Future’ received a lot of positive feedback, now sitting at over 1100 views on youtube. Topazz is currently working on his debut mixtape, ‘ Entwined’. With influences such as Childish Gambino, Flume and Macklemore & Ryan Lewis, it’s safe to say that Topazz has his sights set on great things.

Context will be on hosting duties and Danggers will be on the one’s and two’s throughout the evening. Remember that we will have an open mic from 8.30pm so be sure to jump up and show us all what you’ve got.

EJ Fallon - 18 minutes ago
oh you mean that the tenants should be able to stay there in the upgraded units paid for by the taxpayer? View
EJ Fallon - 28 minutes ago
Robert Knight - Canberra Progressives for Murrumbidgee does that ever not happen? View
Michael Drew - 53 minutes ago
Vickie Quinn eventually?!!? Hasn’t the total amount of public housing gone down in recent years. Does Labour care?... View
News 29

Souhair Naoum - 24 minutes ago
Margaret Dudley love the idea and it can be done from home 👍... View
Emma Davis - 3 hours ago
And you are 100% correct! View
Heather Rattenbury - 6 hours ago
Put the call out... there are probably 100’s of people out there that could help with this View
News 20

Penelope Pollard - 57 minutes ago
I have beautiful handmade ones that were lovingly made by my mum and sister in lockdown in Melbourne..get sewing people! View
Kate Goldsby - 2 hours ago
Wendy yeah I won’t bother making them I’d just pay someone, but yes, I need to get some For everyone View
Ãine Ní Tighearnaigh - 4 hours ago
Better to be proactive and wear a mask to reduce the risk. Many people just don't observe the Physical Distancing requirement... View
News 20

Ray Young - 1 hour ago
I remember that... it rocked us all... View
Gabriel Spacca - 2 hours ago
I’m shocked. Shocked I tell you.* *May not contain actual shockedness.... View
Russell Nankervis - 3 hours ago
I lived in Bathurst at the time but came for tertiary open day in 2010. Had to drive up the round a bout in Mitchel to get ar... View
News 26

Bill Gemmell - 1 hour ago
I will certainly look at it but am worried this proposal will lead to price inflation from suppliers and installers. View
Robyne Mitchell - 1 hour ago
Clinton Berry yes they can better preparation of road base in the first place View
Jack Hearps - 1 hour ago
David Jackson and 'muppets' show is copyright by ScoMoses for the LP ... remember Turnbull debacle when looney religious zeal... View
News 5

@The_RiotACT @The_RiotACT
It will be bulbs in the burbs this year with a re-imagined Floriade spreading spring colour across the city. Check out the interactive map to see where they all are and plan your journey along the tulip trail come September https://t.co/bucfsQCqni (3 hours ago)

@The_RiotACT @The_RiotACT
If you missed Hummer the Giraffe's 19th birthday at the National Zoo and Aquarium over the weekend (and Mbali the meerkat's), that's OK, The RiotACT was there, and now you can get up close and personal, too https://t.co/pUGqLaudul (4 hours ago)