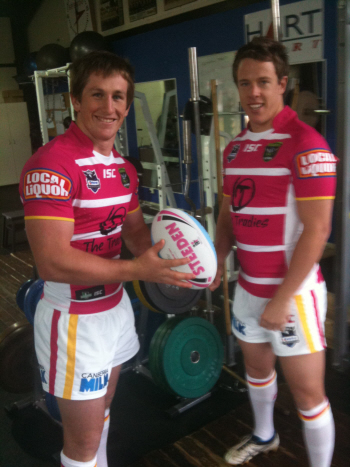 The Raiders have shown off the pink strip they’re going to play in this week to support “Women in League” week.

The Raiders are turning pink this weekend for the Harvey Norman Women in League round and will wear a pink playing strip against the Eels on Saturday night at Canberra Stadium.

The jerseys worn by the players in the match will be laundered and then personally signed by each player who played in the match, which includes any players who may come into the game at late notice or players named on an extended bench.

All Raiders fans have to do is head to www.allbids.com.au and start to bid for their favourite players jerseys, with the bidding open until next Tuesday evening (June 28) until 7.30pm.

Canberra Raiders halves Josh McCrone and Sam Williams modelled the jersey’s today at Raiders HQ, to kick start a week-long celebration by the Raiders for the Harvey Norman Women in League Round.

nealg - 48 minutes ago
Heavy truck traffic, lack of footpaths and e-scooters not a good mix for Mitchell. View
News 45

Kitty Tsui - 54 minutes ago
I missed out, which is sad because I really wanted to get one of these shirts locally to celebrate my transition from partly... View
Courts & Crime 3

Capital Retro - 1 hour ago
It was announced in May 2015 that The University of Canberra will be allowed a supermarket, shops and commercial office space... View
Lifestyle 4

Lyn Bailey - 1 hour ago
The story about the ghost walking along the Hume Highway near Lake George is true. I will remember this story for as long as... View
News 16

Capital Retro - 1 hour ago
Don't speculate on unknown unknowns. View
DrLin - 5 hours ago
Foresight serves you well, I received notice yesterday of a 12% increase to the price yesterday. View
Sport 5

Tim Van Der Vlist - 2 hours ago
No discounts for the members for resigning is a disgrace. They have to play on a mediocre (at best) course for 6 months and s... View
Eamon MacDonnell - 4 hours ago
Rowan Kemp Mark Furry Andrew Thorne stills a ways off View
Property 19

Karl Edmondson - 4 hours ago
If only they ate mice. View
Lewis P Owlay - 8 hours ago
I believe you mean the Delta Myna View
Property 13

John Moulis - 6 hours ago
They must have a lot of pull. Even people on Sydney's upper North Shore who want to remove trees which are blocking the view... View
Pam Dovey - 6 hours ago
Margaret Hunt did you see this? View
Run_W - 7 hours ago
Wasn't this the Club that was complaining last month about being broke and if someone put planes on the lake it would mean th... View
show more show less
*Results are based on activity within last 7 days

Motorists involved in collisions with vulnerable road users may face a specific charge and much stiffer penalties if convicted under...
Opinion 116

@The_RiotACT @The_RiotACT
Forrest Tennis Club is one of just three institutions that the Federal Government says has failed to comply with its 'moral obligations' to sign up to the National Redress Scheme https://t.co/71I4Ex10Bk (25 minutes ago)

@The_RiotACT @The_RiotACT
23 live music venues will share nearly $800,000 in ACT Government COVID recovery funding. Check out the full list and what they got https://t.co/w8nxBBNuFT (2 hours ago)

@The_RiotACT @The_RiotACT
Fire destroyed their Wallaroo home of over 50 years. Bernie O'Brien relives the terrifying few minutes he and his family escaped the blaze https://t.co/cHlAdTrlRY (3 hours ago)