[Note to visiting media – this piece is unashamedly subjective. Feel free make corrections or add your own perceptions in the comments below]

Wednesday night saw in the sixth Press Gallery mid-winter Ball in the Great Hall of Parliament House. I decided I really should make an effort and pop along. So last week Iâ€™d been in the John Hanna and booked a dinner jacket (and the bits that go with it)

The theme was rural, so on arrival in the marble hall of Parliament House I was greeted by service staff with a twist, men in flannel shirts and women in some sort of gingham dresses.

Inside the Great Hall each table looked liked nothing as much as manhattan with place settings giving way to a ring of large, high, brochures for the event, which in turn gave way to a towering centrepiece A large ice filled bowl of assorted beer bottles (with beer in them!) was hidden in amongst the monumental frippery.

Significantly the room was filled with Hillâ€™s Hoists. Someone equates suburban with rural.

Bizarrely the washing lines were sporting racy underwear. (I swear Iâ€™m not making this up)

A whoâ€™s who of politics and business were there. Howard, Beazley, Costello. In turn a horde of people who wanted to see, or be seen with, the luminaries had fought hard to fill the room.

Apparently in keeping with the rural theme the MC for the night was â€œEffieâ€ (aka Mary Koustas). No really, Iâ€™m not making this up.

Effie was actually quite insightful in her routine. I was surprised and impressed. It all made more sense when I heard the rumour that former gallery president Malcolm Farr had written her speech. Effieâ€™s contribution was a lisp, some timing, and a hair piece.

The speakers were blowing monumental amounts of smoke up the arses of the audience. Time and again we were congratulated for our generosity.

We could have given the ticket price to charity. Instead we chose to go to a black tie ball, drink a lot of complimentary booze, have a great dinner, be entertained by the likes of the Tap Dogs, and network to the benefit of our careers.

For this we were constantly congratulated?

The Tap Dogs were up next in a kind of homage to Howardâ€™s Australia. Blokes in blue singlets tapping in unison in their Blundstone boots.

John Howard and Kim Beazley both gave speeches. Kim, as always gave the better speech but, as always, you knew the Short Man had come out ahead.

Peter Garrett then convened the â€œParliamentary Poetsâ€ with Shadow Minister for Regional Development and Roads, Housing and Urban Development, Kelvin Thomson [Actually it might have been Warren Snowdon I was up the back and there were clotheslines covered in underpants in the way], playing guitar. They were interminable and yet weirdly forgettable.

The Press Galleryâ€™s choral society the â€œHouse Howlersâ€ followed. They adapted Queenâ€™s Bohemian Rhapsody into one of those oh-so-jolly musical numbers where we all laugh because theyâ€™ve fitted names we know and slightly naughty words into a song we know. The audience seemed to like it.

There was a bit more telling us all what totally wonderful human beings we were for having come to the ball.

Then the Tall Pop Syndrome took the stage. A very tight and talented group of performers but playing the same tired old bogan rock beloved of King Oâ€™Malleys on a Friday night.

I guess the audience had given up Wednesday night Karaoke at the Holy Grail so this was their fix of stale predictable music.

The besuited men and sequined women took to the dance floor with gusto.

Word started to get around (at least to me) that Deputy Prime Minister John Anderson was going to resign.

Iâ€™m a godawful networker. Partly because my patience for small talk is extremely limited, and partly because I intensely dislike the feeling of schmoozing people I donâ€™t much like. But a friend did introduce me to some bright young things of the Parliament which was interesting.

A bit after midnight I decided that it was time to head home. An interesting night. Iâ€™d recommend it if you get the opportunity.

A source has sent in some photos, here we have the women of the Parliamentary Poets: 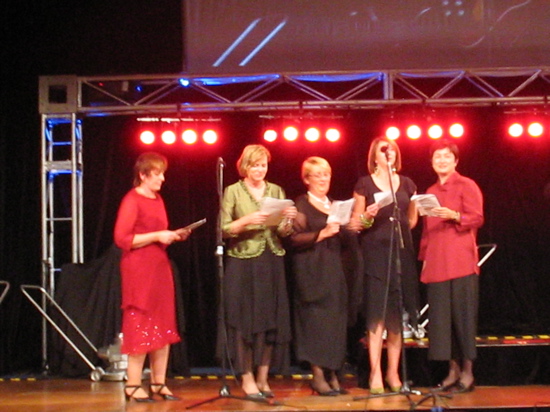 And here the men: 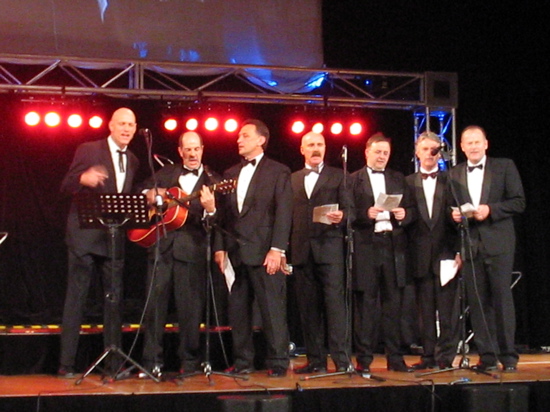 And there the House Howlers: 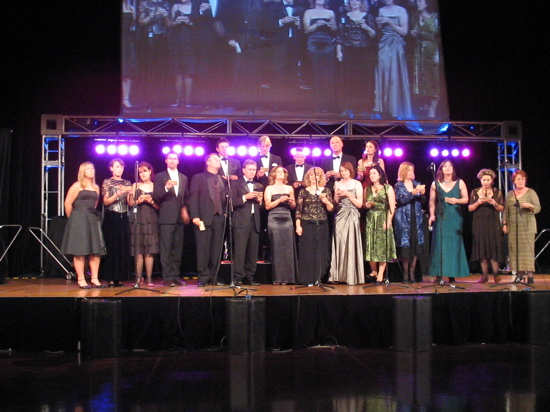 Johnboy, further to your correction, I’m advised that the current Press Gallery President, Karen Middleton, might have helped spruce up Effie’s speech with a little relevant political perspective, not former President Malcolm Farr. Karen sure wins the networking prize; she opened the night with a power speech & was still networking late into the night at the Holy Grail. And only one person managed to get their photo on the evening’s glossy program – Karen’s portrait beamed out at the punters, ahead of other lesser participants, such as Messrs Howard, Beazley, et al. Middleton is a political performer who’d put many occupants of the Big House to shame.

Thumper, you may have put me off that shopping trip now!

Ok, to clear up a few things – yes the underwear was racy – lace g-strings, bras, Jockeys etc all hanging from the washing lines. Prompted a good quip from Beazley about how the stuff left behind by the gallery from last year’s ball was on display for collection.

The event the embittered Chris went to was not the Press Gallery Ball but the end of year drinks, which continue. The ball was started as a charity event about 6 years ago.

Best lines of the night were Effi’s routine about Sophia Panopoulos, and Kim’s line that “The Greeks invented sex, and 3 years later when they discovered women, it really took off”. “What could I possibly say about Tony Abbott he hasn’t already said about himself” wasn’t bad either.

This discussion has the distinct possibility of degenerating rapidly….

sorry, you’ve got me thinking about a shopping trip is all.

A million years ago when I represented a foreign paper I took a friend to a Press gallery bash (they didn’t call it a Ball in those days – but PK did the speech honors) and drinks were served – if i recall, at the Lobby. My guts curled up in fright when Heather Ewart -then in canberra,- curled her (thin) lips at me, not only, I imagine for representing an unfashionable SE Asian paper but because I’d forgotten to take off a name badge I happened to be wearing (the great and the good of the gallery didn’t descend to wearing their name badges that year). And now i can think of lots more I could do with the ticket money.

Too upper market and expensive for me….

And I’m seriously not into networking….

Too posh for me.

Well I didn’t inspect them closely, but there was lots of lace and sequins.

And some of them were pretty insubstantial.

$95 for press gallery passholders. I understand it was significantly (i.e. multiples) higher for others.

For me, between food and booze i felt like i owed the organisers. That’s before entertainment and networking potential kicked in.

Rob Thomas - 5 minutes ago
The comments section of facebook posts are direly unsupported. Perhaps people can help fill them? View
Ruth Brown - 1 hour ago
Will cyclists actually use the bike paths if they get renovated or will they continue to risk life and limb (their own) by in... View
Michael Quirk - 1 hour ago
The even more limited funds available should not be squandered on the extension of light rail. Need projects that deliver rea... View
News 30

Deirdre Mione Wilson - 38 minutes ago
It went from January 1918 to December 1920. So two years and then it just disappeared. Most deaths were in the young, up to 4... View
Ruth Brown - 2 hours ago
Boyo Birch No antibiotic will cure COVID-19. Antibiotics only kill bacteria, they have no effect on viruses. That's why docto... View
Linda Gregory - 3 hours ago
who came up with this 6months theory???how do we kn how long if we only found out abt it not so long ago,???... View
Community 6

Bec Pollock - 2 hours ago
Karen are you really that ignorant? View
Jane Rosewarne - 14 hours ago
Exactly why other people are now struggling to obtain the basics. Some people have way more than they need, while others are... View
Karen Burt - 16 hours ago
How on earth can anyone’s cupboard be bare The excessive shopping people have been consuming is outrageous View
News 7

MERC600 - 3 hours ago
JC the coffee shop in the Jerra shopping centre is situated in the open inside a large space , with Woollies one side and the... View
News 11

Andrea Kerr - 5 hours ago
Angela Moore does it matter really. Use whatever spaces they can to try and save lives. View
Daniel Howell - 5 hours ago
Where are they going to put it View
Dragica Ivanovic - 9 hours ago
Yup for 5G victims. View
Community 15

Two men have been charged by police following separate incidents where they threatened and coughed or spat on people while...
News 30

@The_RiotACT @The_RiotACT
A tender has been issued for a consultant to manage the next stage of the City Renewal Authority's Lake Burley Griffin West Basin development plan, a week after the National Capital Authority announced the North Curtin horse paddocks land swap with the ACT https://t.co/dNzH8KoBev (2 hours ago)