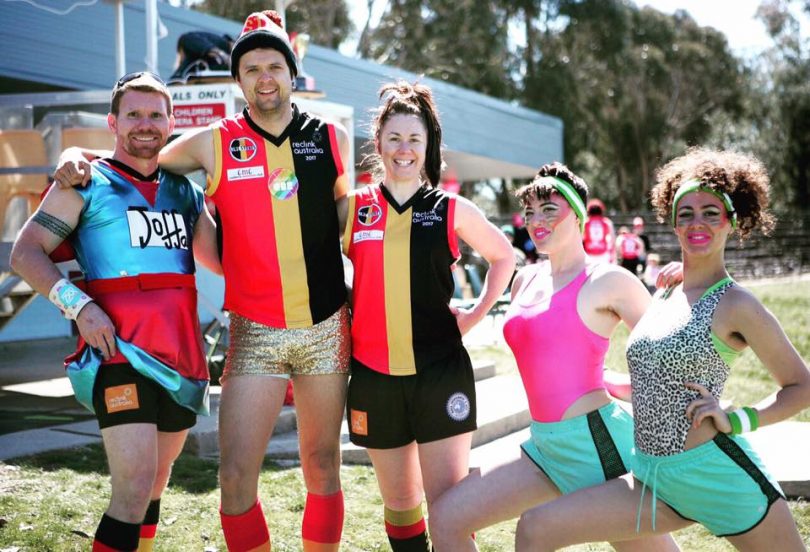 Football wasn’t the only priority for the Limestones. Credit: Anne Garzoli.

Footy, live music, fancy dress, banter, facepaint, something to do in Belconnen, multiple vegan options and a strong variety of dogs to pet.

These are a few of my favourite things, and they all coalesced under a glorious Canberra sun as Sunday 10 September saw the Reclink Community Cup come to Canberra for the first time in its 24 year history.

The Cup is a charity match played between the musicians and the media across most Australian capital cities to raise money for Reclink, who run sports, arts and special recreational events to enhance the lives of those experiencing disadvantage.

With a great cause to champion and a big shiny cup on the line, it was Fleta Page and David Pope (Canberra Times) leading ‘The Noise’ against Beth Monzo (Betty Alto) and myself (Chris Endrey) captaining the musicians, ‘The Limestones’.

After rock legends Waterford had primed everyone’s blood pressure with a live set ringing across the oval, 40-odd members of Mix Tape Chorus sang some Go-Betweens and the national anthem from on-field to bring an electric atmosphere to Jamison Enclosed Oval. Of all places. 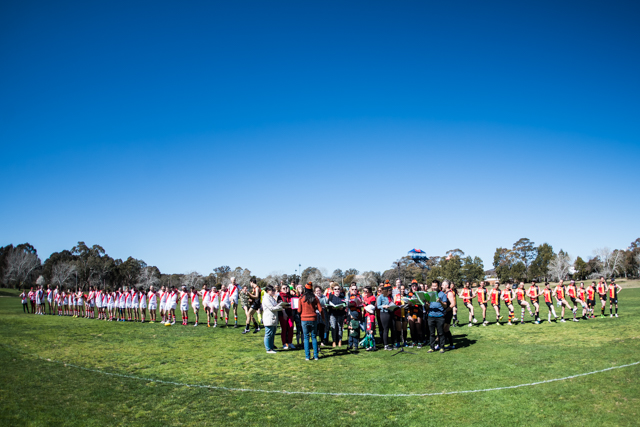 The Noise & The Limestones line up as Mix Tape Chorus sing the anthem. Credit: Megan Leahy.

Celebrity umpires Adam Shirley (ABC Canberra) and Minister Shane Rattenbury graciously officiated proceedings, donning Hawaiian shirts which matched the day’s festive spirit. That said, I vaguely remember telling Shane that I was voting Liberal after being punished with a 50m penalty for innocently bringing the sublime Luke Henrique-Gomes (The New Daily) to the ground by the neck. I’m sure he’d played on. In any case, with former radio jockey and Liberal MLA Mark Parton pulling on a jumper for the Noise, you can be sure I wasn’t actually voting blue in a hurry.

The match itself was tightly contested in what is a too-rare game of mixed full contact AFL. On a day of highlights, I loved Emma Dryden (Glitoris) weaving through a pack, Cody Atkinson (BMA) streaming down the wing, Kath Hagan winning best afield in her first ever footy match and Sean Lawson (Hurling People Now) bringing down folk sweetheart Pete Lyon in a brutal holding-the-ball that made the evening news. There were heroes on all sides and the crowd of all ages were rewarded with a colourful game under the even more colourful commentary of Cup organiser David Lane (2XX, The Big Gee Up).

I have no idea how to estimate crowd numbers, but if the ~500 there hadn’t come for the love of the game, there was plenty on offer from a jumping castle and facepaint to the antics of the flamboyant musician’s cheersquad, the Limestone Roses (led by the apty-named Sweaty Pits). Not to mention the inevitable streaker who ran to the centre square and simply couldn’t be out-tackled.

In true musician form, the Limestones fired out of the blocks to be 31 points up at halftime. Also in true musician form, we were overwhelmed by the idea that we were meant to work for the entire time, only just holding off a fast-finishing Noise who dominated the midfield and had plenty of shots to pull the deficit right back. 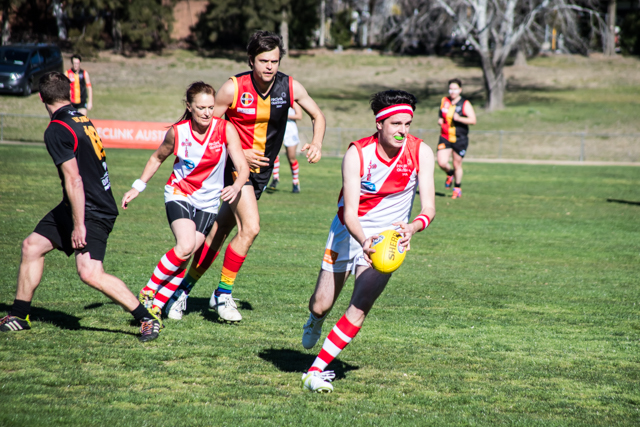 I hope it’s obvious that it doesn’t matter who wins in a charity game. But I hope it’s even more obvious that I wouldn’t be telling you about it if it didn’t end with the mighty Limestones holding on 58-54 as we lifted the cup for musicians everywhere.

With hundreds of stories falling off of every moment, it was a thrilling debut to what will be an annual charity match. In a fun life, I rarely have as much fun as I did on Sunday and while it’ll be hard to wait a whole year for the next one, it will hopefully be long enough for all of our hamstrings/groins/hearts to recover. 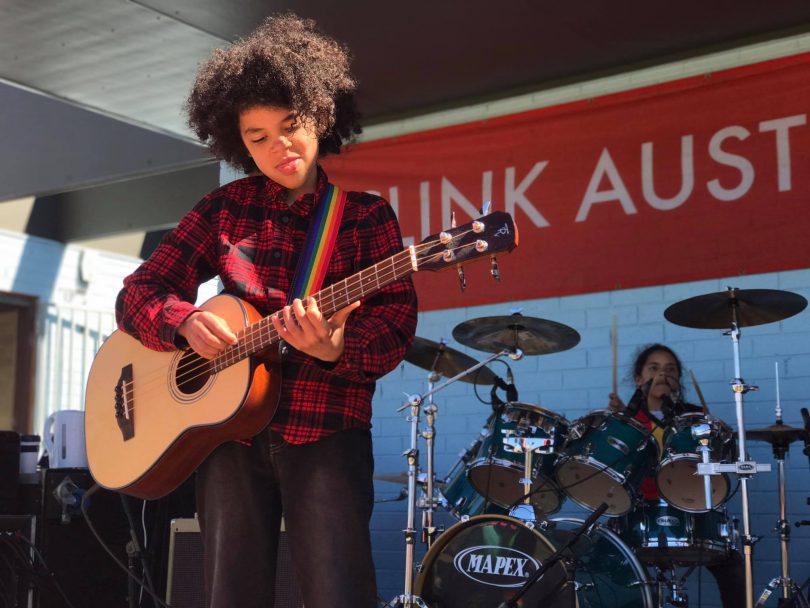 The Wormburners were one of many bands to keep the crowd entertained on a killer day. 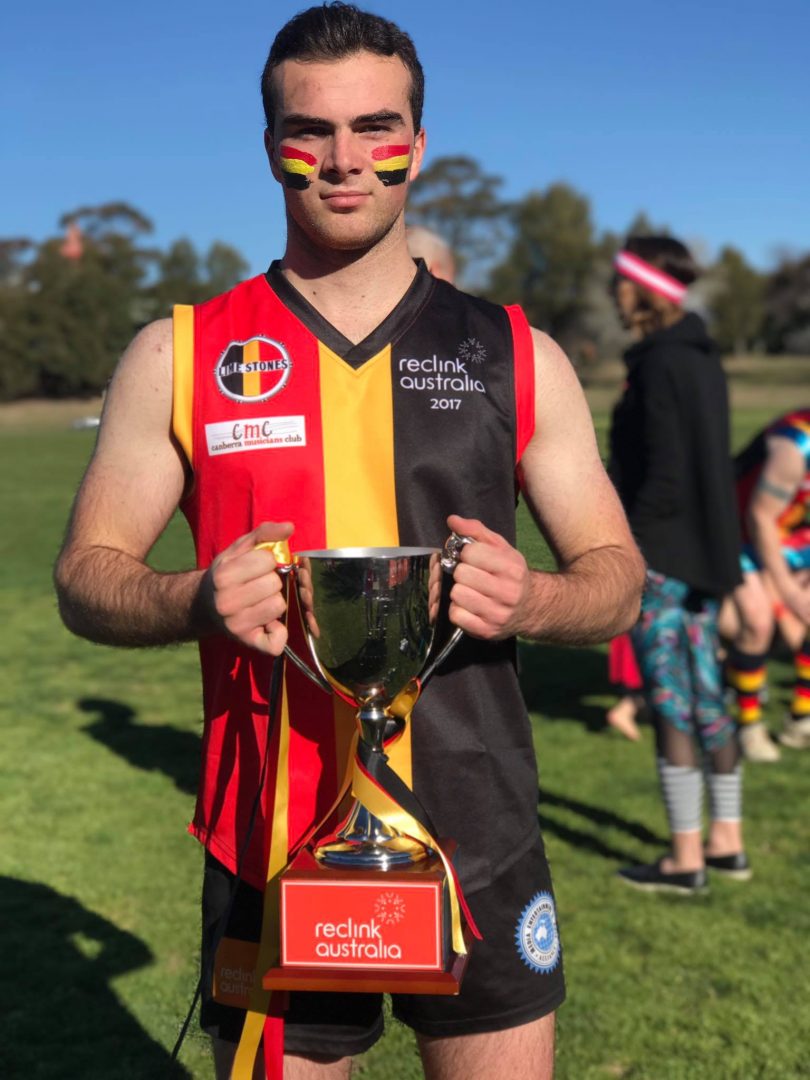 What a perfect day this was Chris Endrey et al! Although have to say, straight to the tribunal for anyone who takes down a folk sweetheart….

Congrats to all the organisers, particularly Tim Daly and David Lane who put in hundreds of hours of work for nothing but love of the game. It was really something.

Lyn Kelly - 52 minutes ago
Hi Bryan, I have 501 and may consider selling it if you are interested. View
News 20

bigred - 1 hour ago
I suspect there are same internal software problems in their billing systems. In my case , last bill was OK but also a wake u... View
JS9 - 5 hours ago
While there is no doubt that the contracts are unfavourably placed at the moment, its not '3 times the current electricity pr... View
bj_ACT - 6 hours ago
Spot on Chewy. As has been pointed out by a few people over the last year. The ACT government has signed up fixed price 20 ye... View
News 7

Johnny Grey - 1 hour ago
He would say that, wouldn't he. Police always want to have their idea of control of drug use.... View
T - 3 hours ago
It would be great if they could legalise medical marijuana for people as an alternative to pain management medications and to... View
poorman - 3 hours ago
Please read https://www.forbes.com/sites/mikeadams/2018/03/28/california-officials-say-marijuana-legalization-causing-more-vi... View
Community 76

Futureproof - 3 hours ago
It's not just Hyundai EVs, it's Hyundai in general. There have been worldwide recalls for vehicle fires on Hyundai ICE vehicl... View
nobody - 6 hours ago
Hyundai have recalled about 1,000 electric vehicles in Australia to replace the batteries, and about 82,000 worldwide. LG hav... View
Opinion 78

@the_riotact @The_RiotACT
The @WNBL #draw has been released and, as Tim Gavel writes, there's a lot for @UCCapitals #fans to get excited about https://t.co/EV8vf94L2J (1 hour ago)