The reptilian women of Canberra 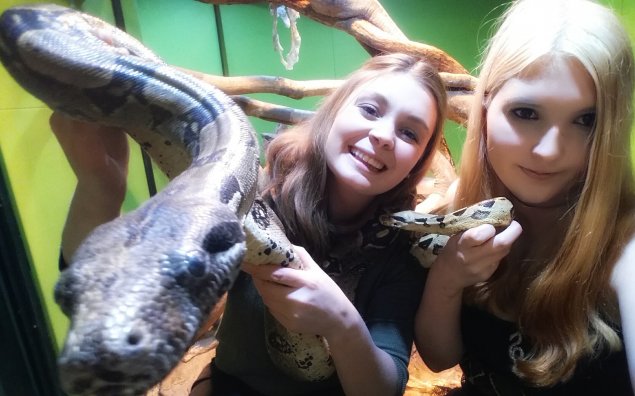 Niki Johnson and Claudia Corrigan know exactly where they want to go and how to get there.

This uncommon confidence has much to do with the fact that on a daily basis they are entangled with snakes, fight off salt water crocodiles and pursue errant frogs and lizards.

Both young women are senior volunteers at the Canberra Reptile Zoo.

Niki fears nothing and embraces everything. Along with working at the zoo, she is an avid adventurer and accomplished water skier. She holds down two hospitality jobs and is studying to become a zookeeper.

On the chilly afternoon when I visited the zoo with my niece and son, Niki insisted on putting her soup aside so that she could introduce us to an array of lizards in a large box. She lovingly pulled out one after another as if she was handling a litter of kittens. Reptiles, N0-fear Niki reminded us, are so misunderstood.

Having done a little research, I tried to impress Claudia by mentioning that in Greek mythology the mother of monsters is half serpent. This she knew well, ‘Her name’s Echidna.’

I went on to hint at how snakes are the symbol of fertility and medicine, how they represent both peril and healing, and how it is from their venom that we get antivenin.

Then I noticed Claudia’s serpentine pendant. She informed me that she is studying veterinary science at Canberra Institute of Technology and how, in a medical emergency, a vet can save a person but a doctor is nigh useless when confronted with a dying or suffering non-human.

I carried on, mentioning that in both eastern and western mythology the snake is regarded as clever and wise, recounting how the serpent in the Garden of Eden enticed Eve to bite that apple and thereby know what she should not know. I speculated that all of this has something to do with their forked tongues and those piercing unblinking eyes.

Claudia nodded, staring back at me with knowing unblinking eyes.

The reptilian women of Canberra reveal things that are icky and frightening. The meek looking turtles are voracious devourers of chicken hearts. Titan the 50kg python could swallow a child. As a substitute, he lives off freshly slaughtered poultry (mostly redundant roosters). Titan’s poo is so big that it cannot be collected with one hand, but it is nowhere near as rancid as Romeo’s (the goanna).

Moreover, Charlie the croc is a jerk and takes pleasure in frightening and biting others.

The worst and most icky parts of zoo life quickly became routine for Niki and Claudia; while their passion for the best parts has grown over the years.

This passion feeds their spirit of volunteerism and propels them to stay at the zoo late into the evening to fix and paint enclosures so they can be ready for the scaly inhabitants and peering visitors in the morning. Their ardour and insights have spread throughout Canberra via parties and fetes and was especially evident at the Gungahlin Festival where they won the award for best stall.

The greatest reward for their efforts is what they do for others.

Upon encountering a pack of boisterous know-it-all boys, Niki likes to grab a python by the tail and compel its lower body down towards the ground and its upper half back up so that she can gaze into its face.

“Bet you can’t do that,” she exclaims, referring to both reptile and handler.

It is not uncommon for ophidiophobiacs (people who are petrified of snakes) to come to the zoo. A bikie once swaggered in only to freeze not much later and start shaking after that. Finally, he bolted out the door and was heard whimpering and shrieking to his partner over her phone as she tried to console him.

Recently a mother brought in her son who was a big fan of snakes. She was not. With carefully measured doses of empathy and encouragement, Niki introduced her to Shoestring the baby python. The slightest pat of the smallest serpent was a gargantuan achievement. The woman left feeling invigorated, more alive.

Niki and Claudia teach us that warmth and tenderness can be generated from the most cold-blooded and scaly creatures.

What are your most memorable encounters with reptiles? What do you know, think and feel about serpents? Have you ever been to the Canberra Reptile Zoo?

Kim Huynh teaches international relations at the Australian National University and was born in the year of the snake. For more information about the Canberra Reptile Zoo: http://reptilesinc.com.au/zoo.toy

Robert Knight - 2 minutes ago
Gill King oh, I get it. I grew up here and spent many a weekend night watching movies there. I understand it’s cultural val... View
Virginia Dodson - 2 hours ago
Let’s hope it’s heritage listing has more credibility than that of Anzac Hall at the War Memorial. Terrific that an inter... View
Gill King - 2 hours ago
Something doesn't have to be attractive to be important for heritage. I understand the cinema part of the building was ground... View
News 12

Chris Prentice - 54 minutes ago
Matthew Soall But it is a business. View
James Vetos - 1 hour ago
A committed centre of learning excellence... Nope, a one trick business struggling under a poor business model. Should be ash... View
Liam O'Toole - 3 hours ago
Emphasis on international students. ANU is discovering the results of putting all your eggs in one basket. View
Opinion 66

The ACT Government has plugged into the market to spark interest in contributing to the Canberra Big Battery initiative, a...
News 23