The return of Ice Cream Headache 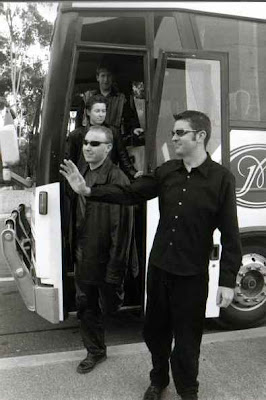 Former giants of the Canberra music scene, Ice Cream Headache, are getting the band back together for a one-off show at the Pot Belly (Weedon Close, Belconnen) on Saturday night.

For those unaware of the history here’s the official bio:

Ice Cream Headache played over 200 shows in their time together including performing with such bands as Pollyanna, Sidewinder, Eva Trout, 78 Saab, John Reed Club, and Webster. They were also the first artist to perform through the multi-million dollar system at Bruce Stadium, beating John Farnham to the punch.

The Creamies were an integral part of the Indie Pop movement of the Canberra Scene alongside the likes of New Wave Failures, Sweater (later Dollhouse), Lilyak, Grover, Special Gueststar, Trouser Trouser, and Penguin. They released one self-titled album, affectionately known as “The Cow Album”, and one 4 song cd for the Canberra Cosmos Supporters Anthem and chants.

Where have they been?

Bek Hall continues to performed as both solo performer, in a duo (bek and Adi), and until recently a band (Newcomer Jenny). She has recorded a number of demos and performed at festivals and on bills alongside Pete Murray, Monique Brumby, Diana Anaid to name a few. Bek has also made a name for herself outside music, becoming a State Rep for womens’ AFL and being nominated for All Australian.

Dave Cole joined ACT band “Griffin”, performing in the US at the prestigious NEMO conference in Boston. As well as persuing a career in journalism, Dave continues to play music in a duo (Dave and Jo), has also written 2 critically acclaimed stage plays: “The Ballad of Maryanne Brownlow” and “Windfall”. He is in the process of writing a screenplay.

Davo Price joined Juggernaught 101 (now Night-Train) and toured extensively, being signed to a US based label and supporting the likes of Jimmy Barnes and Screaming Jets. Davo has most recently been involved in a number of bands and duos with his schoolmate and wonderful musician Nathan Dunn.

Pete Bayliss hung up the bass and moved into the business side of music, managing artists including Big Heavy Stuff, Dave McCormack (Custard), Genevieve Maynard, as well as booking tours for national and international artist and running the odd festival. He was also on the Board of the Music Managers Forum Australia, now content to musically noodle at home. He has started writing a sitcom & 2 novels.

Personally, I found their music to be pretty dumb too.

I want to know what happened to all those guys in BOCK. Well, at least the ones who didn’t join Christian cults and give up music.

Now, if only we could get greats like Trouser, Dollhouse, Cuss, New Wave Failure and of course Crumpet back on stage, Canberra’s music scene could revive properly!

Fookin Unrool!
I’ll be there!
Now, if only we could get greats like Trouser, Dollhouse, Cuss, New Wave Failure and of course Crumpet back on stage, Canberra’s music scene could revive properly!

Andrea Mya Riboust - 1 hour ago
Jamie Angela our large noisy friends from up north, must have just been a particularly busy couple weeks for them 😄 I thin... View
Food & Wine 11

Sukh Raj Singh Cheema - 2 hours ago
Snny Singh how about The one on Main Street, Where we had cup of tea? View
google_user - 3 hours ago
This list is a poor selection of Indonesian restaurants. The list includes 5 star hotel, an Asian shop and a caterer working... View
David Judge - 3 hours ago
You forgot Rasa Sayang in Dickson. Great food- great people. View
News 11

A woman has died after being pulled from the water at a beach on the state’s south coast yesterday. Just...
Food & Wine 11

The owner of Kingston’s upmarket Knightsbridge apartment complex, which had been found to be running an unauthorised hotel on the...
Food & Wine 29

Whenever a story about cycling appears, it activates an avalanche of pent up angst from the wider community. Predominantly it’s...
Property 29

Beth Stevenson is a single mother of two and she could be homeless soon if she is unable to secure...
Food & Wine 29

@The_RiotACT @The_RiotACT
As new photos emerge of the Orroral Valley bushfire, Andrew Barr says the ACT won't engage in a blame game with the ADF https://t.co/TL98OdWXQs (57 minutes ago)

@The_RiotACT @The_RiotACT
Fiona Allardyce from @EpilepsyACT explains how the association provides advice & support to people with the condition and their families https://t.co/fJQfbqVSml (2 hours ago)

@The_RiotACT @The_RiotACT
The ACT is expected to continue its 30-year run of uninterrupted economic growth with the territory expected to grow by 2.4 per cent this year https://t.co/OpgxruIxe1 (5 hours ago)