The return of the Bettong 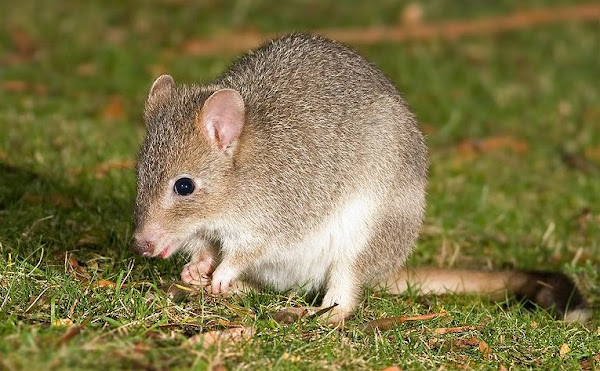 Simon Corbell has announced the release of bettongs at Mulligans’ Flat:

“It is exciting to see that Canberra is the new home on the mainland for this rare species who was last seen in the 1920?s,” Mr Corbell said.

“The bettongs were plentiful in the Canberra district before 1906 but quickly became extinct all over the mainland by the 1920s due to predation by foxes and cats, and land clearing for cropping and grazing.

“The return of the Eastern Bettong to the ACT is part of a larger grassy woodlands restoration project being carried out in Mulligans Flat and Goorooyarroo Nature Reserves – a collaboration between the ACT Government, the CSIRO, and led by Dr Adrian Manning of the ANU?s Fenner School.

“The aim of the restoration project is to unlock the secrets around how these endangered communities function and to provide land managers and the wider community with the tools to improve and protect these important natural places.”

“The arrival of the Eastern Bettong from Tasmania is a critical first step in returning a locally extinct species to
our grassy woodlands. It is thought that Eastern Bettongs serve as “ecosystem engineers? in woodlands, turning over the soil, and improving the penetration of water and nutrients.”

Tidbinbilla is also going to play host to Bettong breeding.

I think if I saw him scuttling around my back yard I’d think “Rat!” before I thought “Bettong!”.

so, yep, thats a cute bettong,and we all love them, and we want them to thrive…..
so, when will the Greens get seriously Green and impose boundaries on cats?

We have a minority Labor Government in the ACT.

Domestic cats musts be confined to their yards at all times in suburbs near nature conservation areas – http://www.tams.act.gov.au/live/pets/cat_owner_information#catcurfew

I think if I saw him scuttling around my back yard I’d think “Rat!” before I thought “Bettong!”.

so, yep, thats a cute bettong,and we all love them, and we want them to thrive…..
so, when will the Greens get seriously Green and impose boundaries on cats?

“Hot Rat on a Stick”

“Hot Rat on a Stick”

‘Gungahlin is being attacked by this re-introduced species’.

I just thought you should read what you’d written, in the hope that you either calm down, or work yourself into another comical frenzy.

We’ll know these Bettongs are really winning when they’re smeared across our beautiful roads.

Unfortunately so do the cats.

Excellent work from the CSIRO, ANU, and Government on this 10/10. More please.

Judging by what is in the chief ministers website, it looks like SC is trying to round up Canberran’s into as small a space as possible, by using the mighty power of the Bettong. If you place enough protected species around a city, eventually the residents will back away into a mini-metropolis. Gungahlin is being attacked by this re-introduced species, the west is backing away from some kind of almost extinct frog and the southside’s white Commodore numbers are dwindling to dangerous levels. On top of all this, more and more planes are swarming over the eastern horizon making the airport a frightening place from which we must retreat.
The A.C.T is a small territory, but if the Green’s have resorted to using a “cute little critter” to do something about Throsby, a species that doesn’t currently live there, what else are they going to try? Maybe we’ll see dinosaurs near Tharwa bridge!
BTW Classified, the cubes will be quite small considering the size of the dish. Better to stuff it with their self importance,serve with a cold dish of sarcasm and a garnish of toasted Greens.

Thanks, Classified – swamp rat, anyone?

Stephen Saunders - 4 hours ago
For me, the right kind of war memorial is the sober VC plaques, all along the highway to Sydney. Close down the Afghan exhibi... View
Opinion 51

Valerie Foster - 5 hours ago
Too many speed changes in too many areas. It is revenue raising. View
HiddenDragon - 16 hours ago
An overly literal (or, perhaps selectively so) approach to the application of the criteria for different speed zones might ha... View
David Brown - 18 hours ago
Clinton Berry I don’t know of any accidents in the last decade. View
Lifestyle 1

Kathy Schneider - 16 hours ago
One of the highlights of the year! View
Sport 7

Robert Hawes - 20 hours ago
Robert Knight Agreed. It would be hard to make a good bus route though the suburb as it is isolated. Would be better if they... View
News 17

Jenny McInnes - 20 hours ago
Angelo Turcin Dr Encrico Taglietti designed the cinema and he won the Australian Arctetects Gold medal in 2007. Clearly you a... View
Trish Roberts - 21 hours ago
Thanks, Andrew! You would certainly know. View
Andrew Pike - 21 hours ago
ANDREI RUBLEV looked great on the giant screen but wasn't the last film. The very last film shown was a reprise of the very f... View
Lifestyle 1

Lynn Stape - 21 hours ago
so great. I was not aware they had a shop. Some really nice things for sale. I love the postcard for Gungahlin with the light... View
show more show less
*Results are based on activity within last 7 days

It's taken 166 concrete bridge segments, but the last one was finally placed on the new Batemans Bay Bridge on...
Opinion 20

When I was growing up, I knew from an early age that money was tight in our family. How did...
*Results are based on activity within last 7 days

As summer approaches, ACT police are warning us that more Canberrans than ever have been caught speeding. They say, rightly,...
Community 44

As COVID-stranded travellers continue to return home, Canberra is doing its bit by taking two planeloads of returnees this week....
Best of Canberra 42

From a humble mid-afternoon working class pick me up; high tea evolved to become an elegant afternoon soiree infamous amongst...
News 61

Senator Zed Seselja has brushed off a challenge for the Liberals' No 1 spot on the Senate ballot for the...
Motoring 37

YWCA Canberra has lodged a development application for its contentious single-storey, 10-unit supportive housing project in Ainslie that has faced...
Property 156

Things are about to get a whole lot cooler in Dickson with the opening of Spilt Milk Gelato Bar today...
Opinion 30

Chief Minister Andrew Barr comes back to work today after a post-election break and needs to clean a couple of...

@The_RiotACT @The_RiotACT
Helen Miller has been delivering meals on wheels in Queanbeyan for 40 years. Find out what drives her to make sure no one goes hungry https://t.co/QgnU3XWTpm (6 minutes ago)

@The_RiotACT @The_RiotACT
Mitchell's new light rail station will also have a Park and Ride, and the government is seeking a contractor to build it. Check out the plans https://t.co/VCOPtdmas5 (1 hour ago)

@The_RiotACT @The_RiotACT
The ACT Government is looking to Build to Rent to grow the supply of affordable rental stock in the ACT https://t.co/vl2vySn8O6 (2 hours ago)