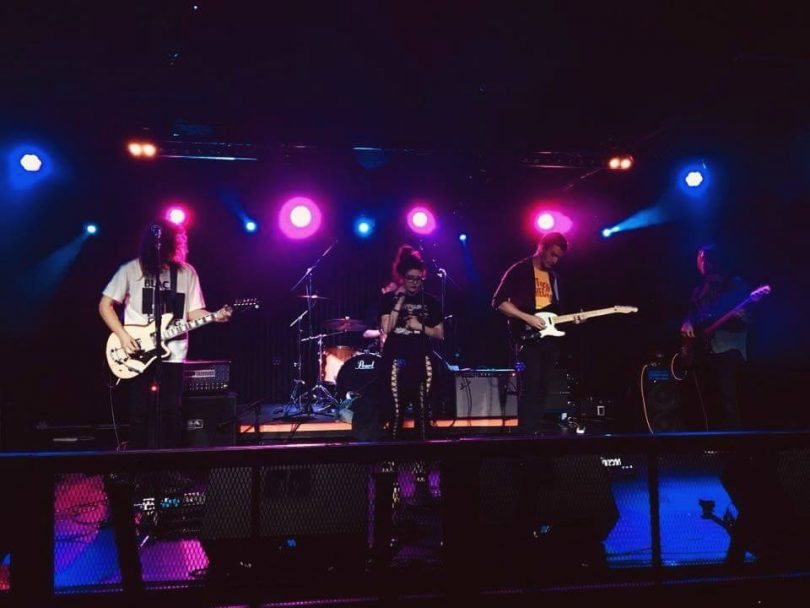 Babe Fiasco (pictured) are only fairly new to the Canberra music scene, but already they are being billed all over the place, flexing their musical muscles with a sound influenced by the likes of Jeff Buckley and The Smashing Pumpkins. Check them out this Thursday as they play as part of Jam Sesh, with other local acts Big Kahuna and Cognisant.

Also on Thursday night BAD!SLAM!NO!BISCUIT! is back, featuring performance poet Suzanne Edgar and local punk-rockers Eadie & The Doodles, on at Smith’s from 6:30 pm. Over at Transit Bar, Wollongongian funk band Enter The Jaguar will be launching their new single “Fantasy” from 8 pm, with help from local funksters Pleased To Jive You and The Wumpaz.

Taking a look at Saturday night, Sydney alt-country rock ‘n roll band Papa Pilko & The Binrats will be playing the Phoenix with The King Hits, while Smith’s Alternative will be holding a midnight show starring the rocksteady King River Rising. Smith’s will also be hosting a free jazz showcase for women from 1:30 pm on Sunday, as presented by SIMA, which will feature a guest performance by The Zela Margossian Quartet.

Mark Johanson - 7 hours ago
WOW, home affairs obviously have a lot on their plate! Talk about the big issues! View
Julie Maynard - 8 hours ago
Why? Too sexy? Can’t the old white men control themselves? From what happens in Parliament, I think I’ve just answered my... View
Marea Stefek - 8 hours ago
Laura Folkard Megan Aster-Stater nothing has changed 🙄... View
Community 10

Jill Slaven - 8 hours ago
Steph Jane great story Steph 😘 View
Paula Simcocks - 8 hours ago
In reviewing my own family history in 1850s - there was more religious tolerance than later on. In Angaston, SA all of the co... View
Mark Elvins - 11 hours ago
Interesting about being buried together. My great grandparents are buried together in the middle of the Binda cemetery becaus... View
Opinion 7