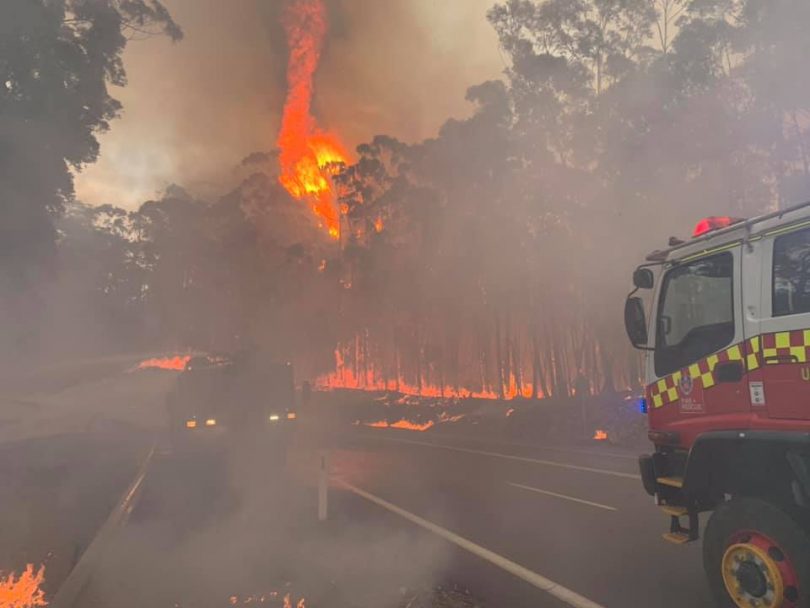 As a journalist, Bronwyn Adcock is used to stepping beyond the invisible line between ambiguity and reality to tell stories, but her latest work scrutinises a powerfully personal event and its ramifications for her community and the nation.

In the COVID-19-dominated 18 months since the 2019-2020 Black Summer bushfires, as fire-affected families and communities quietly limped back from trauma, Bronwyn worked on a story that has become a book, Currowan, a gripping, deeply moving account of one of the most ferocious bushfires Australia has ever seen.

Bronwyn is an award-winning Australian journalist who has worked as a radio current affairs reporter for the ABC on programs including AM, The World Today, Background Briefing and PM.

In 2002, she began reporting and filming stories for Dateline on SBS. The following year she was the first journalist ever to gain access to the inside of a refugee detention centre on the remote island of Nauru, her story winning a United Nations Association of Australia Media Peace Award.

She also reported extensively on the US counter-terrorism strategy of ‘Extraordinary Rendition’, winning a George Munster Award for her work into the rendition of Mamdouh Habib, and dual Egyptian and Australian citizen who was held by the US as an enemy combatant.

A born and bred NSW South Coast girl, around 10 years ago Bronwyn and her family moved from Sydney to became coastal dwellers, eking an idyllic off-grid existence out of bushland west of Bawley Point – midway between Ulladulla and Batemans Bay – as she continued to freelance for ABC, The Saturday Paper and The Monthly.

Ironically, on 26 November, 2019, while researching a story on the upcoming NSW North Coast bushfire season, a fire sparked in Currowan State Forest, more than 30km away. 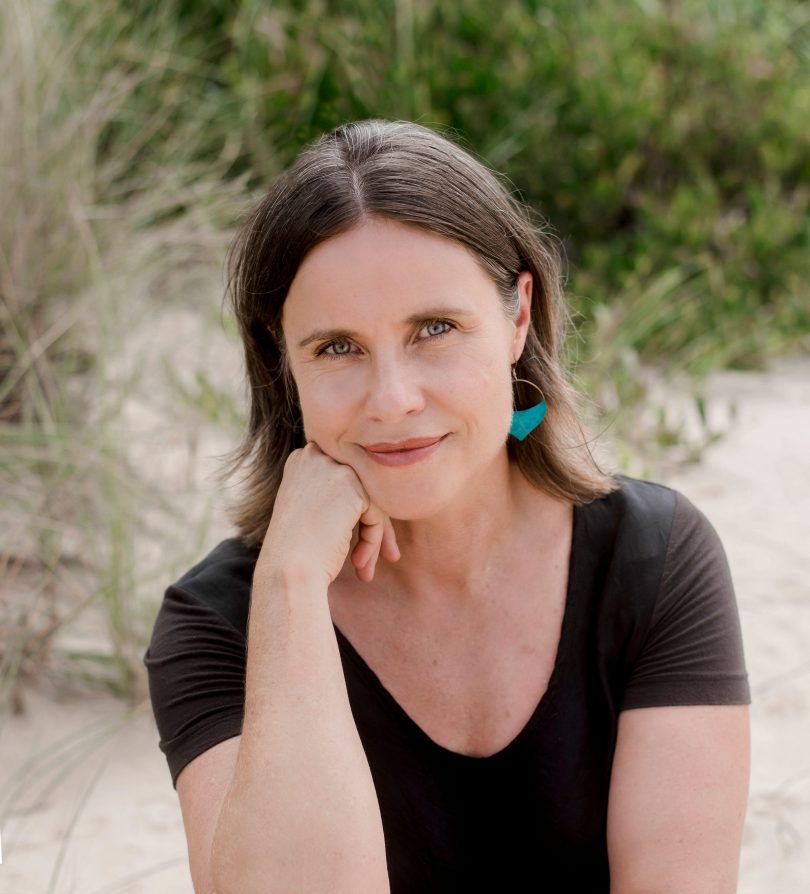 Journalist Bronwyn Adcock says as the Currowan bushfire continued to burn as she found herself oscillating between two alternate realities. Photo: Supplied.

Bronwyn, aware of the persistent plumes of smoke and the dry blustery conditions, was alert but not alarmed.

“There’s a funny little part of human nature where you think it won’t happen to you,” she says. “We’d been onto our own fire preparation, but was I scared? Not particularly – it was fairly business as usual.

“On a professional level, I was certainly aware there had been a lot of discussion, particularly from the Emergency Leaders for Climate Action, who were warning of an incredibly dangerous fire season.”

This in the shadow of an uncharacteristic July in 2018, when 525 fires were recorded in one week across NSW. Two weeks later, 1516 hectares (3750 acres) was destroyed at Budawang National Park, near Ulladulla, and a firefighter was killed in the blaze. That was midwinter.

But a footnote to an interview with a former NSW National Parks and Wildlife Service manager highlighted the number of job vacancies along the South Coast.

As the days passed and the fire persisted, she quickly found herself oscillating between two alternate realities where she’d buy extra sprinklers “just in case we’re potentially hit” while still “beavering away” on her North Coast story.

“I was emailing a woman up north asking what it’s like to live in a fire-affected community, which was quite ironic because in a matter of hours I knew just what that was like,” says Bronwyn.

The fire that ignited with lightning in dense, drought-stricken, remote bushland just seven days earlier had managed to jump roads, highways, rivers and lakes in a northeasterly surge of shooting embers and crowning forest fires that eventually surrounded Bronwyn’s 40-acre coastal property, annihilating everything – even the underground wastewater system – bar the house.

Bronwyn had fled the inferno with her children. Her husband, Chris, who stayed to defend, rang with a plea for help before his phone went dead, leaving her wondering if he would make it out alive. 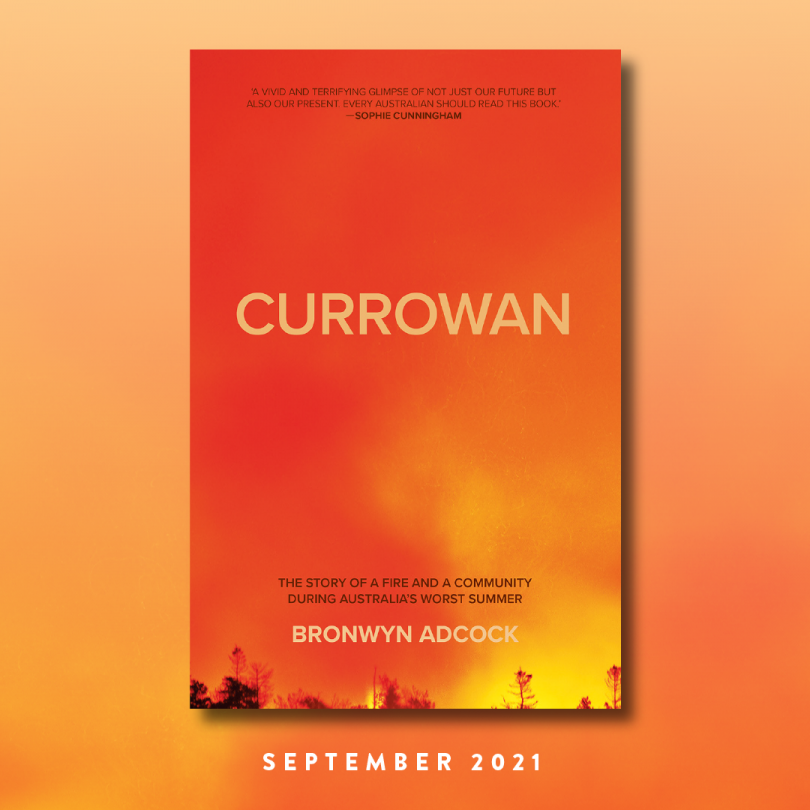 Currowan is a portrait of tragedy, survival and the power of community. Image: Supplied.

Fortunately Chris survived, thanks to the local Bawley Point Rural Fire Service who bravely charged through the burning forest to pull him out.

The Currowan Fire would burn for a further two and a half months, destroying 499,621 hectares, more than 500 homes, and leaving three people dead.

In Currowan, Bronwyn tells her story and those of many others: what they saw, thought and felt as they battled a blaze of never-before-seen intensity.

“It’s my story and my community’s story of what it was like to live through that summer set against the backdrop of what the whole country was going through,” she says.

“I’ve spoken to dozens and dozens of people, tracking the fire as it hit various communities, telling everyone’s different fire stories and how it has impacted them.”

In the aftermath, there remained questions: why were resources so few that many faced the flames alone? Why was there backburning on a day of extreme fire danger? Why weren’t we, as a state, better prepared? Why were the warnings ignored?

So while Currowan is a portrait of tragedy, survival and the power of community, it’s also a story about the worsening crisis that is our changing climate and how that contributed to the Black Summer’s catastrophic outcomes.

“I think this is our reality, our future – this is not a one-off event,” says Bronwyn.

“I think what happened with those bushfires has been quite well forecast by scientists for at least a decade. The climate is changing, and it is getting hotter and drier and we will have more days of dangerous fire weather. None of that is in dispute anymore given the findings of the Bushfires Royal Commission and NSW Bushfire Inquiry.

“This is something all Australians need to think about – how we live, where we live and what’s happening around us because nobody is immune to fire.

“These fires were proof of that.” 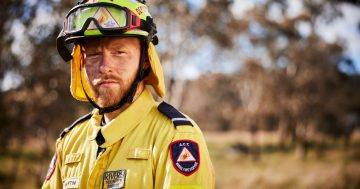 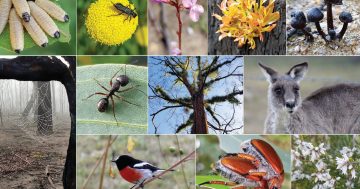 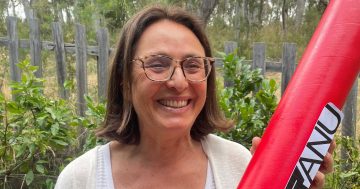 Drones, gliders spark idea to snuff out remote lightning fires before they erupt