The tree report is out 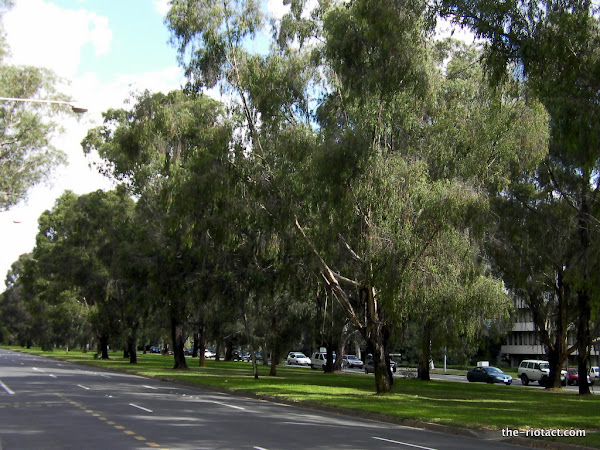 Chief Minister Stanhope has announced the release of the Environment Commissioner’s “Report on the Investigation into the Government’s tree management practices and the renewal of Canberra’s urban forest“.

The recommendations selected by his Chieflyness are:

— establishment of an ACT Tree Curator with responsibility for tree management across the Territory including some functions currently assigned to the ACT Conservator;
— development of an overarching tree protection and management strategy;
— greater recognition for Canberra’s treed landscape in strategic planning, and capacity for the involvement of the new ACTTree Curator in ACTPLA’s Major Projects Review Group;
— a greater emphasis on extending the life of trees, and better integration of tree removal and replacement; and
— strengthened public notification and communication around tree management activities.

Integrating tree removal with tree planting? Gosh who would have thought of doing that?

The report now goes to a Legislative Assembly committee for further inert consideration.

The first point is not always desirable, due to the last point you made.

Sure. I was making a generalised argument. A part of our findings was that caution was needed to default to case-by-case rather than unquestioning blanket solutions. There’s only so much one can stick in a quick blog post. I commend the summary report to you.

The first point is not always desirable, due to the last point you made.

I deliberately bought a north-facing house, looking for winter sun. However, it turned out that the three mature gum trees on my nature strip were just the right height to completely block all direct sunlight in winter, while not shading the house at all in summer. I really was not sorry when one of them died in the drought, and another dropped a branch in a storm and was revealed to be rotten inside. The remaining one looks attractive and doesn’t block the sun. I would be most unhappy if the other two were replaced. After all, my left hand neighbour has only one tree, and my right hand neighbour none. Three for me seemed excessive.

As one of the people on Maxine’s reference panel, I can say that while some of the recommendations may well seem stunningly obvious, they were unfortunately necessary, because current practice was sadly lacking in such provisions.

You’d think that it would be obvious that it’s cheaper to give established trees a bit of a drink during drought periods that to just say “it’s a drought – if they die they die”.

You’d think it would be obvious to do some letterboxing and stick up a sign before you are going to remove a dead or near dead tree.

You’d think it would be obvious that if you need to remove some inappropriate trees (Northbourne anyone?) you would do it progressively over a number of years, planting replacements as you go.

You’d think it would be obvious to design planting plans for new estates with variable species selection so as to reduce winter shading for houses on the south side of streets, or with trees of a scale to suit the size of the verge that will not end up destroying pathways and towering over houses.

The trouble with the way they currently do trees is, you can’t just take down a tree and put a new one up. Trees don’t work that way. If you have a lot of magnificent old trees, knocking them down is going to have a massive impact on the landscape.

So when some up-jumped little officious clown suddenly declares he’s managing the trees and they have to come down, I think it’s justifiable for people to ask for soem really solid justification.

In today’s nanny state, they seem to regard trees as very dangerous things as they fall down, things fall off them, and so we can’t possibly have them.

*– a greater emphasis on extending the life of trees, and better integration of tree removal and replacement; and*

I once rallied to prevent them from chopping down the trees at the back of my then house. A couple of years later – after I’d moved out – one of them dropped a massive branch on the neighbour’s shed. It was very lucky no child got crushed in the playground under the tree.

I’m sure there was a lesson in there somehwere. but it was obviously lost on me because if they ever threaten to chop down our stunningly beautiful Agyle Apple trees in my current street, I’ll chain myself to the one in front of my house. I wish they would live forever. I just don’t park my car under ’em…

“Greater emphasis on extending the life of trees”

Lets see the same idea applied to humans through the health system, eh?

Johnathan Davis for Brindabella - 2 hours ago
I understand what you’re saying Neil. As keen as I am on light rail, I appreciate it won’t happen over night. That’s wh... View
News 3

Robert Knight - 3 hours ago
Thanks to the Riot-ACT's Michael Weaver for coming to speak with us. View
News 10

Capital Retro - 19 hours ago
That's the way it used to be but that is now part of the cancelled culture. View
HiddenDragon - 21 hours ago
"Mr Dubey had apparently gone off message during campaigning..." Could be interesting - we all know what happened in Oxley in... View
News 57

astro2 - 20 hours ago
It sounds as if you are confusing the proponent's proposal with an independent report. Obviously the proponent will put a pos... View
Capital Retro - 22 hours ago
Where do you go now? View
News 29

HiddenDragon - 20 hours ago
This is absolutely not the time for pace-setting in public sector terms and conditions of employment. For the great majority... View
Property 5

Georgie Newhouse - 21 hours ago
Colin Ball whats the bet it wont happen View
Steve Gannis - 22 hours ago
Wow are they serious!! View
Martin Silsby - 1 day ago
Once again, developers seem to get around pesky traffic issues or parking requirements. Gungahlin is a nightmare already of a... View
Community 13

Ziggy Zangl - 24 hours ago
Chelle Belle... Did you find the cheapest Skip? I need one.... View
show more show less
*Results are based on activity within last 7 days

Canberrans are being advised not to travel to Campbelltown or Liverpool after clusters of COVID-19 have been identified in those...
*Results are based on activity within last 7 days

@The_RiotACT @The_RiotACT
ACT paramedics will get a pay rise, OH&S friendly equipment and new ambulances under a new enterprise bargaining agreement with the ACT Government https://t.co/Zl0AYc3yuC (31 minutes ago)

@The_RiotACT @The_RiotACT
The Canberra Progressives launched their party yesterday ahead of the ACT election on 17 October, and while they were tight-lipped on policy and preference deals, they did have two symbolic inflatable dinosaurs called Compy and Vesty. But why? https://t.co/uIdl4O2tO0 (2 hours ago)