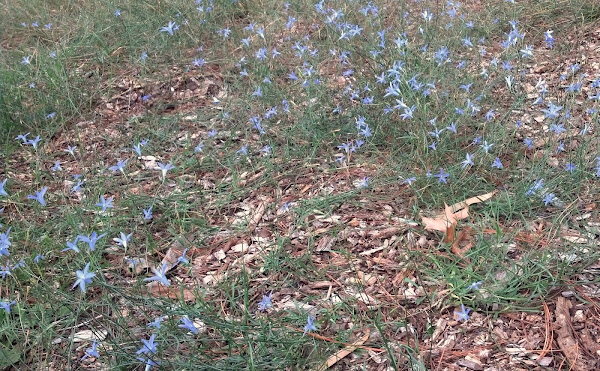 While out on the Turner greenspace (where Sullivans Creek settles before meeting ANU) I came across our floral emblem, the Royal Bluebell, doing rather well thank you very much.

Got an image of Canberra you want to share with the world? Email it in to image@the-riotact.com .

When I think how many tourists I have lied to. 🙁

The Australian Bluebell is much more common and is often mistaken for the Royal Bluebell.

The Royal Bluebell is a much deeper Violet colour, has different leaves (More rounded and wavy rather than bladelike) and is shorter. It can be seen up in Namadgi or at the Botanic Gardens. It’s a bit hot and dry for it to grow wild down here.

That’s exactly what I was thinking. Lovely tho.

The Australian Bluebell is much more common and is often mistaken for the Royal Bluebell.

The Royal Bluebell is a much deeper Violet colour, has different leaves (More rounded and wavy rather than bladelike) and is shorter. It can be seen up in Namadgi or at the Botanic Gardens. It’s a bit hot and dry for it to grow wild down here.

They are a cheery little flower and I do like them, even if tourists always look at me a bit oddly when I point one out as the Territory flower.

Good to see them doing so well.

Bronwyn Wilson - 3 hours ago
Where are e teacher librarians going to come from? There are very, very few in the ACT - that’s why so many schools don’t... View
Chris Cross - 3 hours ago
Layla Barry almost $1 TRILLION and counting, courtesy of Federal Liberals, who almost scared the nation into recession with t... View
Pam Wood - 6 hours ago
Another rort in progress View
ACT Election 16

Fito Ferrari - 5 hours ago
Lake Burley Griffin should be emptied, land filled and lots of apartments built on it. View
Brent Hutch - 5 hours ago
Gloria Altinger might need to check your maths View
Tom Munro - 7 hours ago
Conrado Pengilley Nothing to do with ACT government. It’s NCA land and would be federally funded. View
Property 8

The Woden Town Centre after hours can be a lonely place but all that is about to change. While there...
*Results are based on activity within last 7 days

@The_RiotACT @The_RiotACT
The stars have aligned for Canberra born & bred lawyer Haydn Marsh from @SHGLawyers, presenting him with a host of opportunities https://t.co/Lkfg9s5F5o (35 minutes ago)