The view from Mt Gingera. Images of Canberra 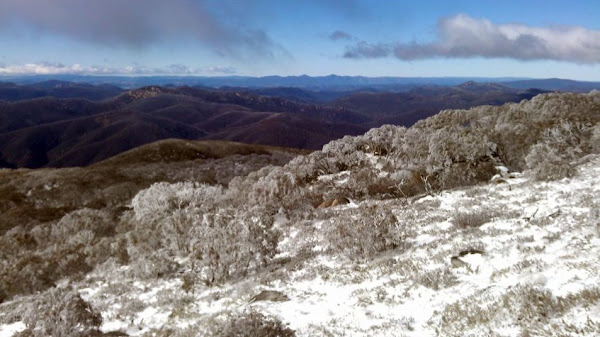 Demosthenes has sent in this picture with the following note:

Taken on a walk from Corin Dam up to Gingera via Stockyard Spur / Pryor’s Hut the weekend before last.

More pictures from the walk are available.

7 Responses to The view from Mt Gingera. Images of Canberra
Filter
Showing only Website comments

Yeah I just found out – it’s an amateur and not a UHF repeater.. oh well..

What does the government have to do with the repeater?

Well if I run in to trouble, should I try Channel 5 emergency channel? Or even if I was running late it would be nice to lets Parks know to save un-necessary worry or effort.

Planned itinerary is Corin Dam carpark around 8:30 to Gingera and back via Pryor’s hut…

Will have an EPIRB just in case too..

Hopefully I will need neither of course.

I’m going up this weekend…. Anyone who can meet me at the top may qualify for free financial advice 😉

Weather is looking favourable. I now have a UHF radio on order too (hopefully arriving tomorrow), hoping to use the Ginini repeater in case of problems. Going to make the most of the last few days of winter before the summer fire storms start up again 🙂

Channel 7? It has has been shut doe for near 10 years. You can blame the current Government (& former CM) for this.

That repeater was one of the best safety nets in the nrothern Snowies as it covered Canberra, Shannons Flat, Adamninaby, Kiandra, Cabramurra & everywhere inbetween.

I’m going up this weekend…. Anyone who can meet me at the top may qualify for free financial advice 😉 Weather is looking favourable. I now have a UHF radio on order too (hopefully arriving tomorrow), hoping to use the Ginini repeater in case of problems. Going to make the most of the last few days of winter before the summer fire storms start up again 🙂

Sweet! I’ve been meaning to go there for ages, and I’ve decided that this year it really is going to happen.

Camels Hump in the Tidbinbilla reserve first, though.

What are your thoughts on the new track/firebreak?

The almost developed track makes a whole lot of difference to the climb.
Please refer to this elevation profile that I’ve prepared earlier.

As can be see in the linked picture the start is a climb of 550m for 1.8km. Average of 17 degrees angle doesn’t seem much but it strains the ankles and hamstring after a few minutes of climbing.

Many of the most dangerous slopes have been laid out with steps made of sturdy wood (with iron pipes staked into the ground) and rock slates enforced with cement, so this has made the going easier and safer. Overall it has improved much, but there are still some challenging, though not dangerous, slopes left on the track.

There are some points I’m concerned about, which is the made paths that are supported by live trees. Tree fall is a natural occurrence, and there was one big tree that had fallen right next to the track, so I’m fearful that at some point some of these supporting trees might give way. Praying that it doesn’t during the time someone walks past it.

Overall, it’s a great track. But it isn’t for people who are unwary of the initial steep climb.

What are your thoughts on the new track/firebreak?

Fantasic!
Are those Yeti footprints in the snow? (slide show)

Alyssa Stuart - 30 seconds ago
Emily Grace we can agree to disagree 👍 When you live it and have to deal with it day in and day out, some for many many ye... View
Alyssa Stuart - 5 minutes ago
Kim Bal-Al there are plenty of girls nights! and it’s my invite so they can accept or not but I’m not going to bow down t... View
Aiden Valter-Brown - 7 minutes ago
There is different privileges for different aspects of life. As a married, white, heterosexual, Christian man with young chil... View
News 53

Capital Retro - 11 minutes ago
I'm placing a sign on my door which will say: "Every third burglar will be shot. The second one was here yesterday"... View
Ben McQualter - 33 minutes ago
Police aren't interested in anything except handing out fines View
John W Crawford - 59 minutes ago
Does that reinforce the old saw " dead men tell no tales"???... View
Public Sector 57

Anthony Philip Parker - 2 hours ago
I'm feeling hungry just looking at that breakfast. View
Jasmine Elliott - 4 hours ago
Kynan Elliott you could do this View
Jane Farrugia - 5 hours ago
Went there for lunch the other day. Service was great, very friendly, food was really good, will definitely be going back🤗 View
News 13

JS9 - 2 hours ago
Whether they should or not, the markets do care, because the credit ratings invariably drive the interest rate at which insti... View
JS9 - 2 hours ago
To be fair - an implicit guarantee exists in the form of the RBA. Because it can always print money and buy Government bonds... View
Heavs - 3 hours ago
Dear Chewy and JS9. Thanks for pointing out how things actually work inside government finance. But actually, here is another... View
Community 8

Richard Lawton-Wade - 3 hours ago
Never went there but still fondly remember it. It seemed to achieve legendary status. View
News 9

kenbehrens - 15 hours ago
I think you know, but are choosing to ignore, the reason that patronage of the buses in the suburbia is relatively low. It's... View
Food & Wine 10

The outsourcing of Australian Public Service (APS) work, including the use of consultants, has been described as an industry full...
News 52

ACT residents will soon be required to self-submit a report online when they are victims of certain crimes, including house...
Opinion 33

Does your puppy or rescue dog need help settling into their new life with your family? Has a recent injury...
Opinion 31

It's one of those words that seems to be dripping from the mouths of every progressive-minded or savvy professional with...
News 25

@the_riotact @The_RiotACT
Businessman Trevor #Kennedy, who died this week aged 79, is remembered for his role at the flamboyant height of the Packer #media empire, but he was also a generous donor, a passionate Australiana collector, and committed to the NSW South Coast https://t.co/omWhd2qD1b (1 hour ago)

@the_riotact @The_RiotACT
RT @Breaking_247: ACT Health has confirmed eight new cases of #COVID-19 in the ACT, and there are no confirmed cases of the #Omicron varian… (1 hour ago)

@the_riotact @The_RiotACT
In a tough year for #business, the @CBRBusiness has reported steady membership and new services for its members https://t.co/RSQ0GnCSmk (2 hours ago)