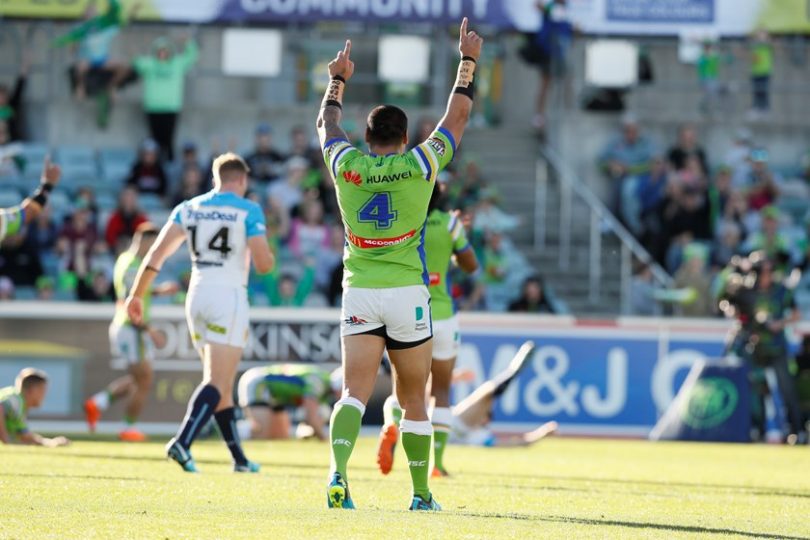 Joey Leilua plays down rumours his brother is moving to Canberra. Photo: Supplied by Canberra Raiders.

Joey Leilua and his younger brother Luciano grew up playing footy in the backyard but Leilua has dampened rumours that his sibling will soon be playing alongside him in a green jersey.

Luciano signed with St George in 2016 and made his debut for the club the same year but the 21-year-old second-rower hasn’t been sighted in the NRL since his rookie year.

Luciano was Illawarra’s best player in reserve grade last year and was rewarded with a two-year contract extension at the Dragons in December.

Luciano is no chance to match up against his brother on Sunday afternoon after an injury earlier this season and Joey said it was disappointing not to face his sibling on the paddock.

“We were looking forward to playing against each other but unfortunately he got injured during the year and it’s hard to get back into that team with the team they have got now and playing so well,” he said.

“It is disappointing for both of us, but maybe one day we will play against each other or play with each other.

“Hopefully he gets back on the field soon.”

Rumours have been floating around about Luciano coming to the nation’s capital but Joey said one Leilua was enough for the Raiders.

“I heard the rumours but there is only one Lealiua boy here mate,” he said, laughing.

A massive task is ahead of the Raiders, who will face a Dragon side who many believe are competition favourites and sitting on top of the ladder due to the impact of James Graham and Ben Hunt.

“They are a good side all around the park and especially in good form with Graham who is leading their forward pack and Ben Hunt coming into their side now, it makes their structure a lot better,” Leilua said.

“We lost last weekend’s game, but we have just got to move on to next weekend’s game and make sure we prepare for this week and stick to our gameplan.”

Leilua was confident that Austin will be right to play come Sunday afternoon and believed Austin’s injury was similar to the one he suffered in round two.

Leilua was stretchered off the field in the Raiders’ second-round loss to the Knights after collapsing under the weight of a gang tackle, only to make a miraculous recovery and play the following week.

“Austin has done the same thing that I did in week 2, but he will be alright,” Leilua said.

“Whoever comes into the team, I am sure will fill the starting role.”

Mudgee is a 10 hour return trip by road from Canberra via Bathurst and it is more direct than Canberra to Albury. You will need at least two drivers who like winding roads.

Why Mudgee? There is no direct route to get to it from Canberra.