These older Canberrans are ready to deliver a spray - but not in the way you might think ... 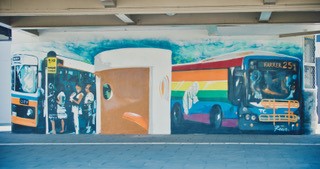 A group of mature Canberrans are throwing out all the usual stereotypes. Instead of settling in at home with gardening gloves, knitting needles and bingo cards, they’re picking up spray cans and heading out in search of the nearest dark alleyway …

When you think about street art, graffiti and spray-painting, chances are, you picture youths in hoodies creating illicit art on the walls of a tunnel or alongside the train tracks.

But a group of senior Canberrans have set out to change that perception, and on the way, they’re increasing appreciation of this often-maligned art form and also encouraging recognition of the vast array of skills older people can bring to our city. 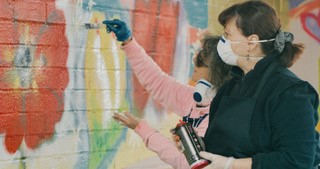 The artists use brushes as well as spray cans to create their work.

“The Silver Sprayers” are a group of Canberrans aged 55 years or over, who were brought together by The Streetwise Project, a street art workshop.

He has now produced a short documentary to promote the venture.

The documentary features Silver Sprayers Mila and John, as well as facilitator Dai Cameron, showcasing their recent work and talking about being part of the group.

“I really saw a great story in it, that street art is not just for the youth,” said Nathan. 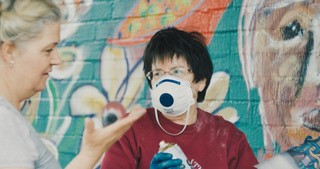 Mila from The Silver Sprayers features in the documentary.

“I was inspired by the concept both of street art and the idea that older Australians could make an amazing contribution to this area of the art world.

“It upends all those traditional narratives, both about graffiti and street art, but also older Canberrans, what they’re interested in doing, and the role they play in our community,” he said.

The murals shown are a colourful collage of animal and human portraits, insects and flowers, abstract drawings and inspirational sayings, and even the iconic rainbow ACTION bus.

Most walls are proudly tagged with The Silver Sprayers’ name and 55+ ethos, the group clearly proud of their unusual beginnings. 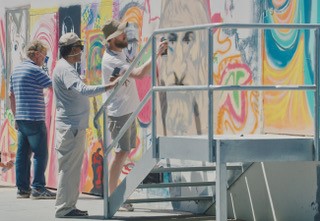 Putting the finishing touches on a recent mural.

Previously, Nathan has lived and worked all over the world with an impressive client list that includes Oxfam, the United Nations, and Facebook.

He was a Fulbright Scholar to Kenya, recipient of the Fulbright New Leaders Award in 2009, and recently won an award for best fashion film at the Bokeh Film Festival in Cape Town.

“After travelling so much and meeting so many interesting people all around the globe, there is just so much creativity and inspiration that exists in unexpected places – and sometimes, the most creative work comes from people we can easily overlook,” he said.

“I hope people will think twice next time they see street art. There is a great chance here for us to reshape our thinking about the value of older Australians, as well as the contribution of street art, toward making this a more colourful and dynamic city,” said Nathan. 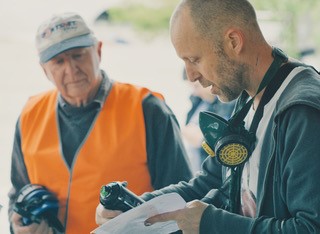 Silver Sprayers and facilitators planning their next mural.

The work of The Silver Sprayers can currently be seen at the Woden Bus Interchange, near Westfield, and you can watch the documentary online here.

The project is ongoing, and the team has their sights set on Narrabundah as the next locations for a ‘spray’. Southside, 2604, represent! 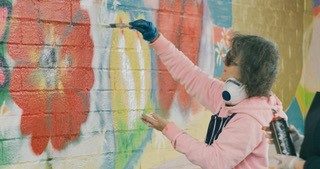 The Silver Sprayers hard at work on their next masterpiece.

“Our hope now is that we’ll be able to expand the project, attract more community support, and secure longer-term funding,” said Nathan.

“I’ve been working on this on a fully volunteer basis so far because I really want it to succeed.

“I think we have a great opportunity to bring colour to some of the more grey and drab parts of our city,” he said.

The Streetwise project was coordinated by Transport Canberra and City Services (TCCS), ACT Government and Play Activation Network, supported and co-funded by Westfield Woden, and supported by the Council Of The Ageing (COTA).

Keep up the good work – plenty of walls in Canberra that need some attention!

Is that legendary artist Benjamin Reeve teaching the Silver Sprayers?