As seen on Bunda Street this morning: 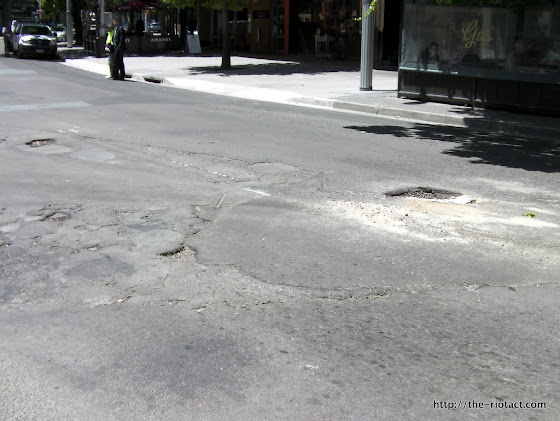 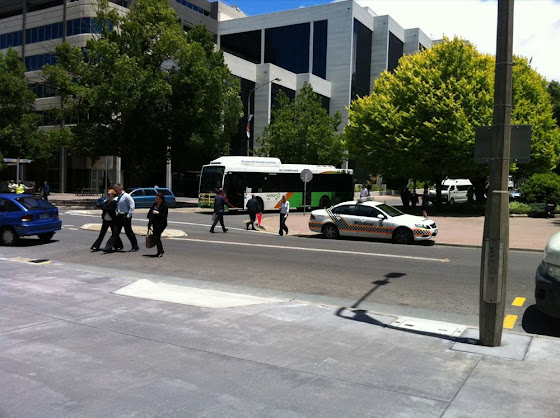 A broken down ACTION bus. 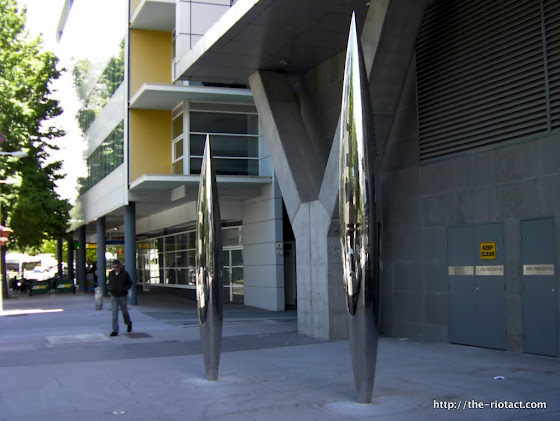 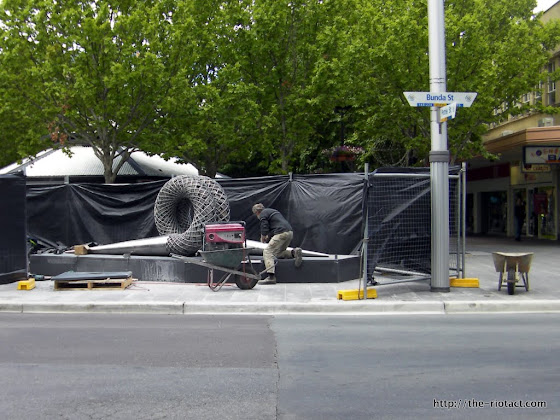 And more on the way.

Talk about art (is it?), what about this room filled with glowing sails, as if they are minature Opera House, at the corner of Bunda and the bus interchange? What is that and who is funding it?

Sorry, but I don’t have any pics of it.

““Bike paths are not art.”
They can be if we make them shiny.”

No thanks, the surface of some of those paths are bad enough already without making them shiny!

“Bike paths are not art.”
They can be if we make them shiny.

Bike paths are not art.

but navigating them in their current run down state sure is!

why pave Bunda St, when Anzac Parade can be re-worked on a yearly basis?

Anzac parade isn’t reworked on a yearly basis, It’s been undergoing staged restoration for the last couple of years, this is the last bit that needs to be compelted.

As for Bunda st I suspect it will be resurfaced when the footpath upgrade is completed.

I saw the broken down bus, it occurred in a very bad place. The police were making a half hearted attempt to direct traffic around it, but didn’t appear to be doing a good job of it. I’m surprised they didn’t get a bunch of people and try and push it through the intersection and next to the Actew building in the interchange.

Public transport and roads maintenance are not doing well, so nothing else should either?

“We need more bike paths in addition to more potholes.”

Bike paths are not art.

Essfer, Johnboy dislikes public art and anything else that Stanhope does. His pictures are probably a way of generating heated discussion about how public art is a waste of money, all at the expense of road and bus maintenance.

The reality is clearly buses break down even if properly maintained and roads get potholes, especially after the buck loads of rain we have had.

We need more bike paths in addition to more potholes.

I love the cuban’s, simply Perfect, but not so fussed with the birdsnest. I’ll grow to love the Bus, and the potholes could do with a bit more off the sides.

What correlation is there between public art installations and a poorly maintained road or a bus that is ineffective?

It’s not shiny public art, it’s the escape ships for the micro-invaders.

I find the last two images to be particularly disturbing.

Bunda St pavement has been a disgrace for years. Honestly, it’s probably the single busiest street in the city and it’s got a road surface like a Bangladesh backroad.

why pave Bunda St, when Anzac Parade can be re-worked on a yearly basis?

Anyone detecting a bit of a theme with the recent art pieces? As in “shiny”…

Only theme that springs to mind is waste of money ! It is money that would be better spent elsewhere.

I’m confused about why these pictures are grouped together. What correlation is there between public art installations and a poorly maintained road or a bus that is ineffective?

Because they were all seen on Bunda St this morning…. ?

I’m confused about why these pictures are grouped together. What correlation is there between public art installations and a poorly maintained road or a bus that is ineffective?

I’ve been meaning to say though – kudos to the local gov for having the intellectual wherewithal to ignore the needs of the broader population so as to fund art for the enjoyment of the minority.

(It’s not trolling if it is dripping with sarcasm, is it?)

Anyone detecting a bit of a theme with the recent art pieces? As in “shiny”…

nealg - 10 hours ago
Heavy truck traffic, lack of footpaths and e-scooters not a good mix for Mitchell. View
show more show less
*Results are based on activity within last 7 days