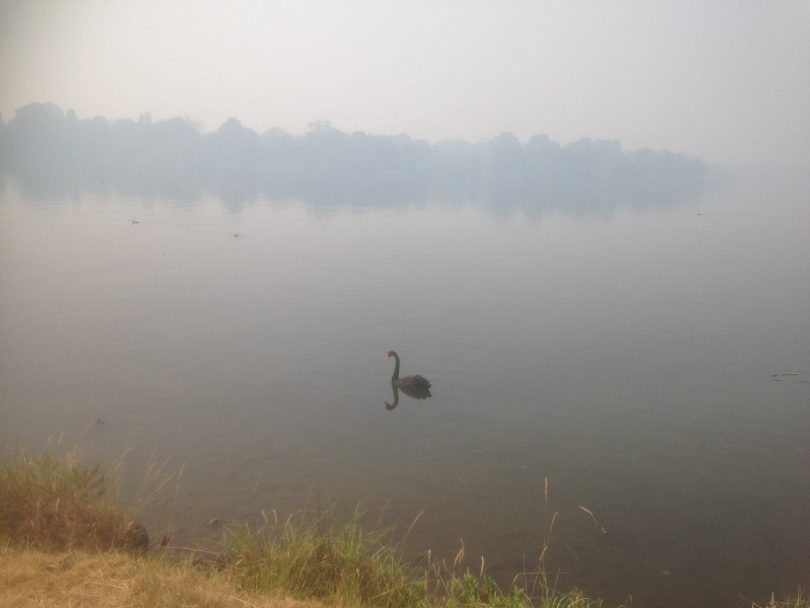 The smoke is not just comprised of carbon particles … It’s the remains of millions of plants and animals. Photo: Supplied.

In the wake of the 2003 bushfires, ACT Parks Services invited naturalist Ian Fraser into fire-damaged parts of Namadgi National Park and Tidbinbilla Nature Reserve before they were re-opened to the public.

Reporting via radio and emails that were shared internationally, he recorded their devastating impact and later the recovery process.

He reflects here on the overwhelming toll the current fires are taking on our bush and everything that lives there.

About a week ago I stepped onto our little balcony in the darkness and first smelt the smoke.

I confess that for a moment I had pleasant associations, of a flickering campfire casting some light onto surrounding trees.

Like most of eastern and southern Australia, we in Canberra have become used to the constant smoke, varying between a haze and a curtain, but never absent. We may not have got used to the stinging eyes and catching in the throat, but we expect them.

But really, the inconvenience and discomfort is far from the worst of it.

This smoke is not just comprised of carbon particles, it contains hundreds of thousands of hectares of national park, rainforest gullies and towering eucalypts hundreds of years old. It’s the remains of millions of plants and animals.

It’s the hopes and sweat-work and future and livelihoods of hundreds of people. It’s the composition of this smoke that hurts so much, and we shouldn’t wish it elsewhere; we need to be reminded, for as long as it goes on, what we’ve done.

In time, if it ever rains again, the forests will start to rebuild themselves, but the animals can only come back if there are unburnt remnants as survival refuges.

I saw a map yesterday showing that the majority of the Greater Blue Mountains World Heritage Area is now either ash or flames. Most conserved forests between Canberra and the sea are now smoking ground. And the fires are still burning, new ones are starting.

What HAVE we done?

And it’s only December. What of January, February, March, April …?

Everyone knows why it’s suddenly so catastrophically bad. Everyone, it seems, except those we elected to ‘lead’ us, who are seemingly too craven, too stupidly complacent, or too much in thrall to the coal industry to do so.

I’ve been pretty positive for most of my life. I never thought it would all start to grind me down after all this time.

I remember there was black sludge on the bottom of the Murrumbidgee at Uriarra Crossing for at least 2 years after the 2003 fires.

Ashley Wright - 12 minutes ago
Josh Shirley and when did you buy this property and how much equity did you have when you brought? View
Ashley Wright - 16 minutes ago
Candace Driscoll they never make more than market value of the property. Whilst rent is based on a percentage of income of al... View
Josh Shirley - 4 hours ago
I had a 3 bedroom 2 bathroom townhouse in Melbourne 30mins from the city and the mortgage was $200 a week cheaper than any re... View
Lifestyle 18

Garth Kirwin - 7 hours ago
they need to fix these lovelys up.if canberra loses these canberra loses it soul. View
Kathleen Lee - 14 hours ago
What! They are historical buildings. Don't be so silly. View
Glenys Callaghan - 17 hours ago
I love these buildings, they represent Canberra to me. I hope they are never pulled down as they are part of Canberra’s his... View
News 5

Signs of changing seasons: is it wattles, native orchids or the shrike thrush’s spring song?