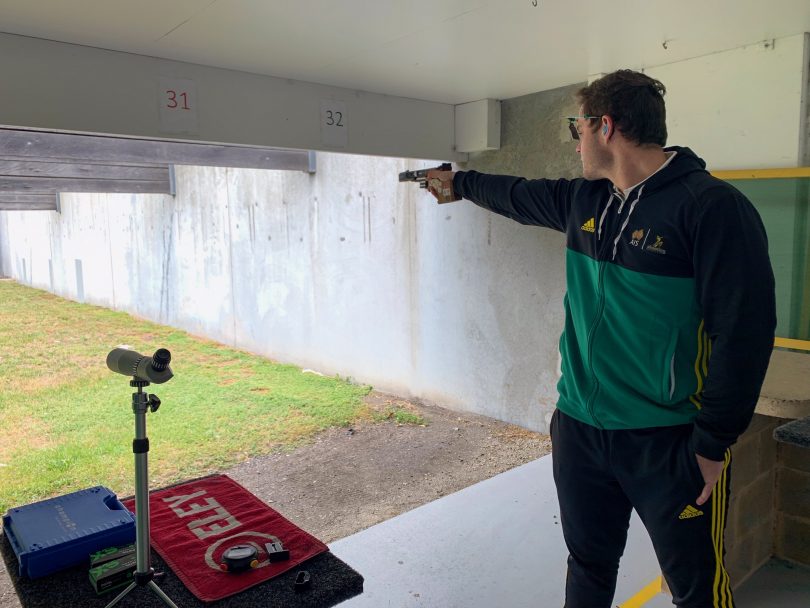 There’s hours of preparation behind Thomas Ashmore’s quest to make the Australian shooting team for the Tokyo Olympics in 2020. Photo: Supplied.

When Thomas Ashmore opted for shooting over rugby in his final years at St Francis Xavier Catholic College in Florey, it was a declaration he was determined to take the sport as far as possible.

An early indication that he had made the right decision came when he was named the College’s Sportsperson of the Year in Year 12.

“It was great recognition,” remembers Thomas.

Five years later and Thomas is on the verge of selection in the Australian shooting team for next year’s Olympic Games in Tokyo.

All that stands in his way is the qualification series of four matches which starts in February. He’ll compete for the one place on offer in the Australian team for his discipline: the 25-metre rapid fire pistol.

If he makes it through, it would make up for the disappointment of missing out on the team for the 2018 Commonwealth Games on the Gold Coast. Yet this provided added motivation, and it’s why he won’t be thinking about too much else over the next couple of weeks although he may have some away from the range over Christmas, “then it’s back to training”.

Training comprises gym sessions with the ACT Academy of Sport (ACTAS) consisting of strength, stability and technical sets. Then it’s off to the Canberra National Pistol Club shooting range at Mt Ainslie for four to five shooting sessions a week.

It’s not cheap. Thomas goes through 250 rounds each training session at the range, costing around $8,000 a year in ammunition alone.

“It’s expensive,” says Thomas, “but I get a lot of help from ACTAS and Shooting Australia.”

To help out, Thomas was has the benefit of the Eldon and Anne Foote Sporting Scholarship. He received this award as an athlete/student at the University of Canberra where he completed a Bachelor of Business Administration, a degree that took him four years to complete because of the amount of time away training and competing.

Now aged 23, he’s ready to take on the best in the world at the Olympics.

“It would be great to make the team,” says Thomas. “It’s what I’ve been striving for.”

All that stands in his way are three fellow Australians.

May Agnew - 34 minutes ago
I am being blocked from SHARING my above comment -not allowed to speak the truth these days --WHAT NEXT ?? View
May Agnew - 37 minutes ago
Turning the beauty of Canberra into a concrete jungle now and to think that so many hard workers who built this beautiful cit... View
Jamie Peterson - 4 hours ago
This article is the same as a puff piece for Andrew Barr 😂😂😂😂😂😂😂😂😂😂😂😂😂😂😂😂😂... View
Lifestyle 65

RobS - 6 hours ago
After *seven* years of trying to try to bring pressure on the ACT Government (I was a member of the Wright Residents Group) t... View
Lifestyle 14