A magistrate has described a man’s threat to set a woman on fire as “particularly heinous”.

Jason Steven Buckley, 39, began arguing with the woman on 25 November 2020 before gesturing that he would hit her with a bottle of milk.

Later, he splashed some liquid from a bottle labelled methylated spirits onto her and threatened to set her on fire.

On Tuesday (3 August), Magistrate James Lawton told the ACT Magistrates Court the woman had given a statement describing the terror she felt in that moment as she believed Buckley would carry out the threat.

The woman fled Buckley by getting into her car, but he followed her and smashed her front windscreen with his elbow before she drove away.

A warrant was issued for his arrest and police found him on 25 March 2021 near the Don Bell Playground in Bonner.

He verbally threatened police before running at them. Police deployed a dog to subdue him, but he wrestled free and continued to head towards them.

Police had to physically restrain him, but he continued to struggle with them despite being tasered.

He said the threat was a particularly serious offence and that it would have been distressing to the woman.

“I think that would have been a particularly heinous and terrifying incident,” he said.

Buckley’s barrister, Karl Pattenden of Key Chambers, said his client had spent four months and nine days in custody and was supported in court by family members.

Prosecutor Marcus Dyason said while there was no evidence to prove there was methylated spirits in the bottle, the woman believed that’s what it was at the time and that Buckley could set her on fire.

Magistrate Lawton told the court Buckley had a reasonably extensive criminal history, although he noted he had written a letter of apology to the woman.

He sentenced him to six months’ jail, suspended from Tuesday. But as an intensive corrections order for him had been revoked in NSW on separate matters, he was released into the custody of NSW Police that afternoon.

Why suspend his 6 months?

I think he should have received a longer sentence.

I though that as a society we were trying to prevent domestic violence.

And of course violence against first responders.

This guy appears to tick a lot of worrying boxes.

Set an example to people like him. Lock him up for longer, don’t just give him a slap on the wrist. 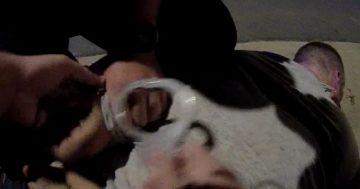