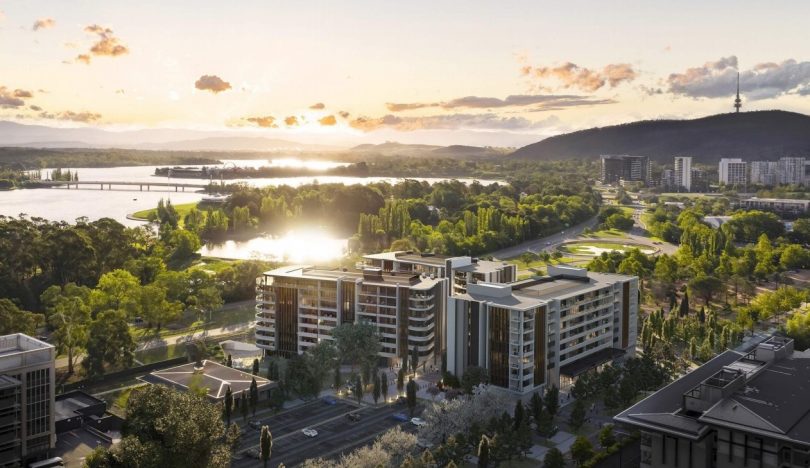 A render from Works Approval of the site showing the three buildings and their prime position. Photos: Supplied.

Amalgamated Property Group has lodged plans with the National Capital Authority for a mixed-use development on Constitution Avenue in the Parliamentary Triangle that will contain 260 apartments.

Called the Griffin, the development includes three buildings of eight storeys (25 metres high) each on Blocks 8 and 11 Section 3, Parkes or 44 Constitution Avenue, next to the Anzac Park West building, as the first stage of a two-stage development of the site.

Amalgamated acquired the 15,191 square metre site from the Commonwealth in 2017. Sale conditions mandated that the heritage-listed APW Portal Cafeteria be retained.

The area is undergoing considerable change with a string of developments underway or planned along Constitution Avenue and Parkes Way, an area of national significance and heritage value with important features such as Commonwealth Park, Anzac Parade and the Australian War Memorial nearby.

Building A, fronting Constitution Avenue, will have 87 apartments, with about 1600 square metres of commercial space on the ground floor.

The plans say the proposed development has been designed to integrate with its surrounds, considering adjoining streets, pedestrian networks and linkages to open spaces including Commonwealth Park and the curtilage to the cafeteria building.

The Works Approval application says Building A will front Constitution Avenue and contain 87 apartments, with about 1600 square metres of commercial space on the ground floor.

Building K on the south-west of the site will have 93 apartments, while Building O (fronting the APW Cafeteria) will hold 80 apartments, with resident facilities including a gym and rooftop lap pool. All buildings will have a mix of one to three-bedroom apartments, as well as penthouses. 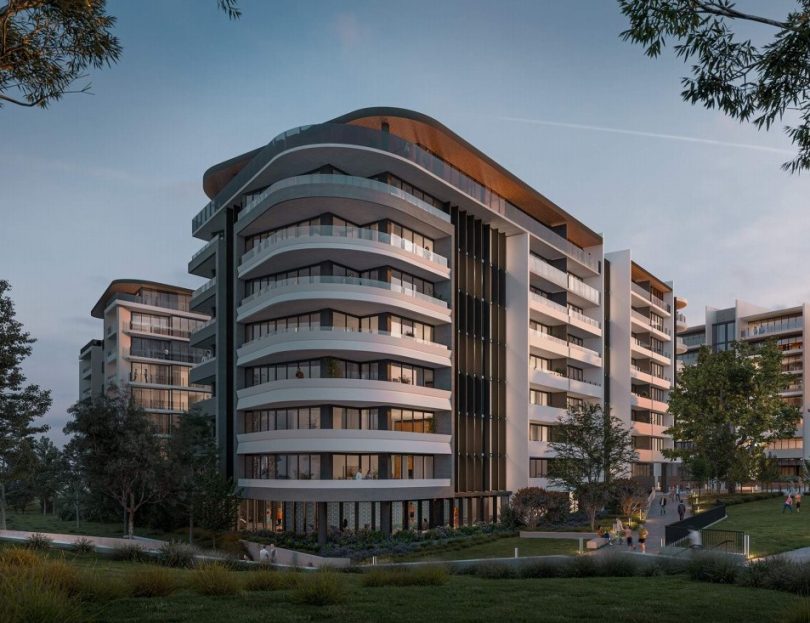 Building O will hold 80 apartments and have a gym and rooftop lap pool.

Beneath each building will be two levels of basement parking. Overall parking provided is 441 spaces, with 58 at ground level, 203 in Basement 1 and 180 in Basement 2.

A single access point is proposed off Constitution Avenue, and the traffic report says the estimated peak demand for the development is predicted to be 152 vehicular trips.

It says that given the current traffic flows along Constitution Avenue and the relatively low peak volume demand, this should operate above the satisfactory level.

A total of 260 storage cages for bicycles will be provided within the car parks.

The proposal includes internal shared access roads and pedestrian paths through and around the site, including connection to the Parkes Way underpass to Commonwealth Park and integration with existing works along Constitution Avenue. 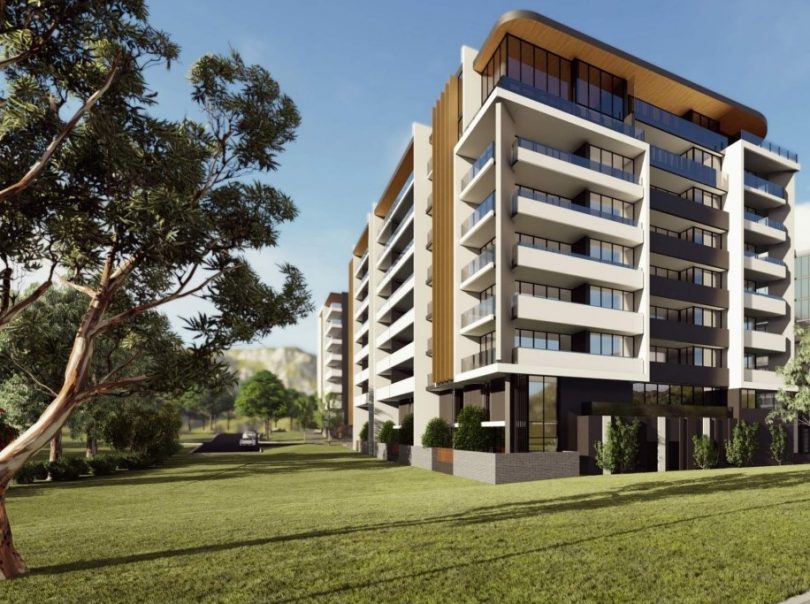 Building K will have 93 apartments.

There will be a recreational podium between Buildings K and O, landscaping through the site and new tree plantings along the Parkes Way verge.

The plans say the proposed development has been designed to integrate with its surrounds, considering adjoining streets, pedestrian networks and linkages to open spaces including Commonwealth Park and the curtilage to the cafeteria building.

No work is proposed for the cafeteria building and no existing trees will have to be removed.

The surface car park on the eastern part of the site will remain, but its edges will be landscaped to integrate with this proposal. It will be developed later as Stage 2 of the master plan.

Consultation is open until close of business on Friday, 13 December.

Belinda Spouncer - 2 hours ago
Jon Billows Canberra has much higher prices for petrol. I have been here for 5 years and was shocked at the prices paid here.... View
The Fluid Complex - 10 hours ago
Ben Oostermeyer Nope. EVERYTHING is going up. Inflation rising significantly because we strangled supply with lockdowns and r... View
News 2

bikhet - 10 hours ago
The union says "jump." The Government says "How high?" View
gooterz - 12 hours ago
Just because someone is vaccinated doesn't automatically mean they are ok with a mandate. Do you really want the school or ed... View
News 51

Noah Gaming - 12 hours ago
The school is fabulous with a great community. Please let’s not tarnish the name of the whole school. I very much feel for... View
Lynne Meredith - 13 hours ago
Thank god, my kids don’t attend Charnwood. This is not the sort of person I want educating my kids!! View
News 257

Acton - 13 hours ago
Kids being kids have died in swimming pools, at the beach, in cars, off bicycles and in every other place and way it is possi... View
Acton - 17 hours ago
If a kid falls out of a tree are we also going to demand the government does a risk assessment and remove them? View
Lynne Meredith - 20 hours ago
Jo Telfer and there on lies the problem. Everyone complains about tween/teens just hanging around but something like the flyi... View
News 5

Paul0075 - 17 hours ago
I don't understand why we're protecting an introduced species. Yes they're lovely to look at and certainly don't deserve to b... View
Community 42

Paul0075 - 17 hours ago
Like many roads in Canberra, the NCDC had this in mind in the 1980s, but traffic volumes were not of a level where it was nee... View
purplevh - 1 day ago
Most of those roads should have been designed and built or improved to have overpass intersections instead of traffic lights. View
News 12

chewy14 - 20 hours ago
Acton, No it's nothing remotely like that. And I say that as someone whose default position is that we should always be biase... View
Acton - 21 hours ago
What has happened here is not as extreme as those examples, but has exposed a latent desire to dob in neighbours, give up che... View
Grant Hunter - 1 day ago
Julie Macklin lots of people aren’t jabbed Brownshirt View
Lifestyle 12

@the_riotact @The_RiotACT
COVID-19 has been tough on us all, but for Asian-Australians it's also brought out a layer of #racism. New publication 'Sweet and Sour' is giving creatives a place to share their #pandemic thoughts and experiences https://t.co/5syW4A3RpE (7 hours ago)

@the_riotact @The_RiotACT
After three generations, the family of #Canberra modernist architect Cuthbert Whitley is selling their #Reid home. A garden oasis on the city fringe, it's been modernised but retains its 1930s charm https://t.co/8usf0kYxZ0 (9 hours ago)