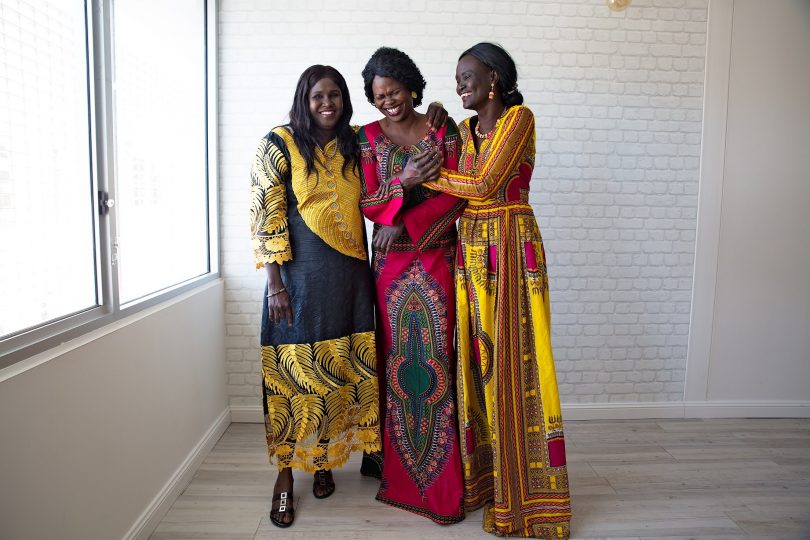 Three Canberra women who left the death and violence of war-torn Sudan to establish new lives in Australia have started a new food catering business which will bring the delights of South Sudanese cuisine to our city.

Achol Aguer, Athok Bol and Traza Brag are looking to share the healthy, exotic and flavour-packed food of their homeland with Canberrans through their newly-registered White Nile Women food business.

Starting with pop-up events in Canberra and the neighbouring region, the three women will cater for between 40 and 200 people and take diners on a cultural journey while enjoying the traditional food.

On the catering menu will be delicious dishes such as lentil spinach stew to be scooped up with Kisera and Injera (similar to crepes but made from different ingredients); Okra (a type of meat and vegetable stew); Sukuma Wiki (collard greens which can be eaten with Couscous); and Basbousa (like a small semolina cake).

Achol, Athok and Traza arrived in Australia separately between 2003 and 2005, escaping the horrors of Sudan’s civil war and the trauma of years in refugee camps.

Athok lost her husband and first-born child on the border of South Sudan and Ethiopia, while Achol spent many years in refugee camps in Ethiopia, Uganda and Kenya.

Achol recounts that she fled escalating violence in South Sudan with her sister at the age of 13 and went to Ethiopia where she later married. When fighting started there, Achol then moved to Uganda and then Kenya from where her family (now including six children) were sponsored by a cousin to come to Australia. 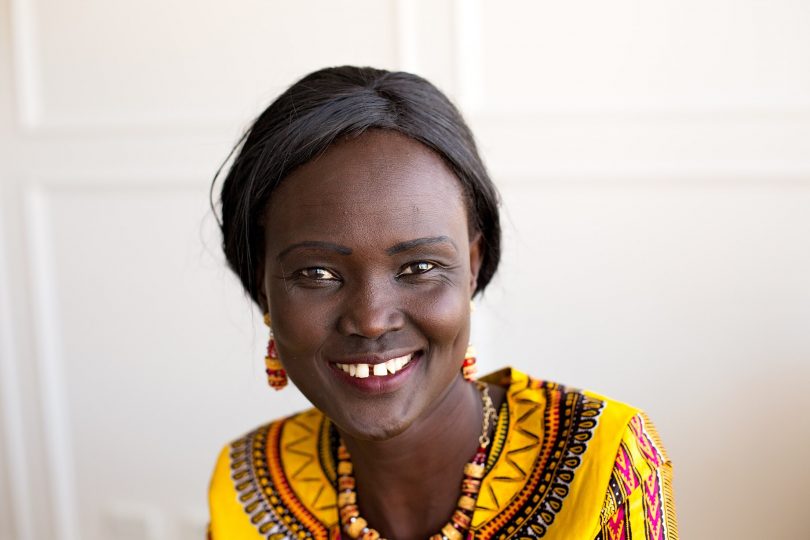 Achol said that before she came to Australia, she spent most of her time living in fear.

“When I came here the first thing I was scared of was the fireworks,” said Achol, adding that she still stays away from New Year’s Eve and Australia Day celebrations because the sounds remind her of war. But she loves Canberra and said “I feel really safe here.” 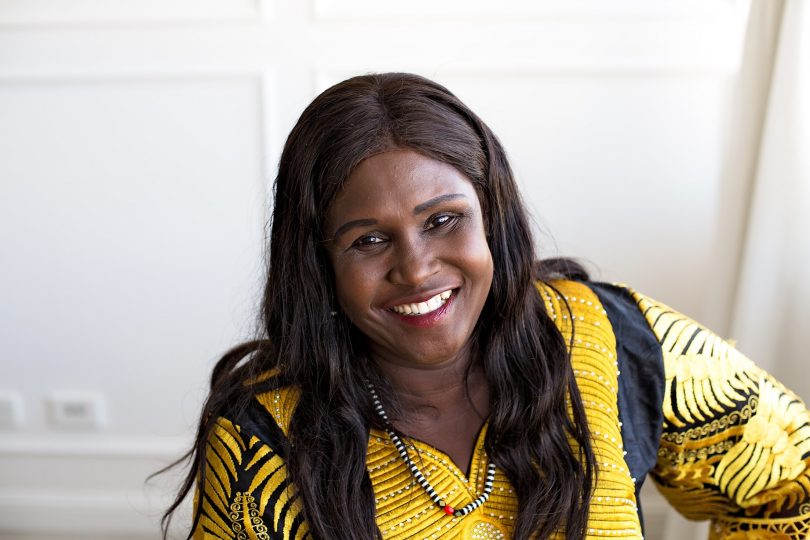 For Athok, the distress of losing her husband and child is still very real and talking about their deaths brings her to tears. However, she echoes her friend’s words.

“Being in Australia changed my life and my kids are safe too,” said the mother of seven.

Traza escaped from Northern Sudan with her brother before eventually making her way to Australia. Now a mother-of-four, she is completing the final year of a nursing degree at the University of Canberra. 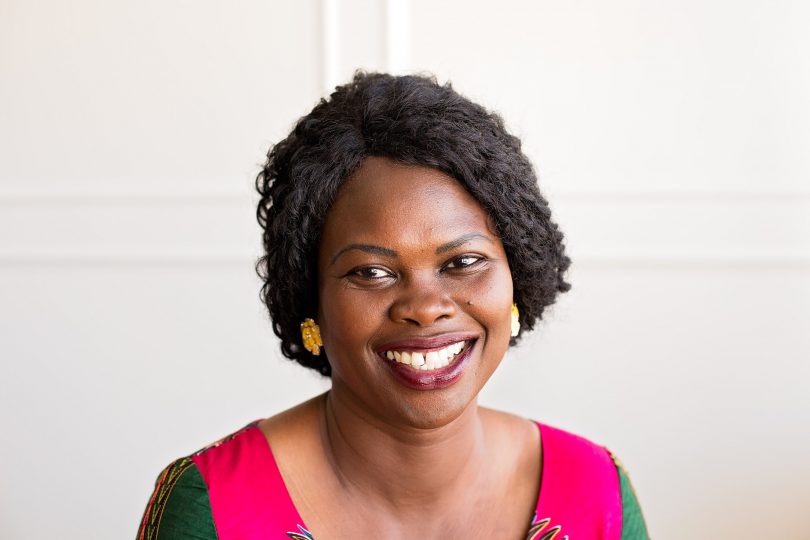 The three women have named their business after the White Nile as it is one of the main tributaries to the Nile in Africa and the lifeblood of many African nations.

They say they will take inspiration from the great river in bringing South Sudanese cuisine to Canberra and sharing a taste of their culture.

The women first started on a path of bringing to life their food business in Canberra in 2011 but were confronted with many difficulties and moved away from traditional cooking.

However, their business dreams have been revived with the aid of Global Sisters, an organisation dedicated to assisting women to rise above difficult circumstances to start their own micro-businesses.

Global Sisters have helped to provide White Nile Women with the tools, networks and resources needed to establish their business and have also connected them with an experienced coach in their industry – Georgina Prasad from HomeGrown Me.

Thanks to Georgina’s support, the three women will be able to work out of the commercial kitchen at Canberra City Farm in Fyshwick.

They have also made some other good connections with plans to do a ‘pop-up’ at Trader & Co. in Yass and possibly in the future at the Daana restaurant in Curtin. 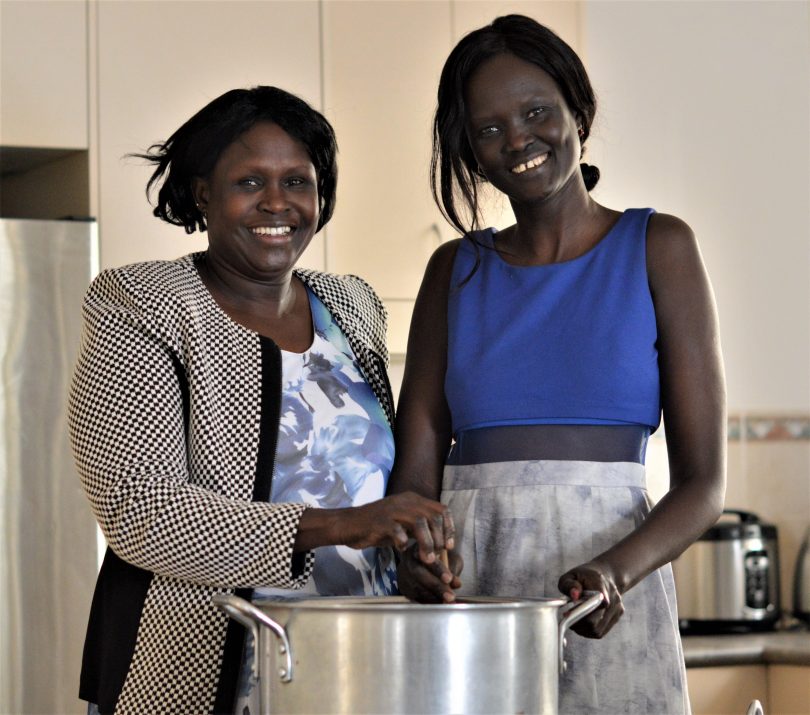 Athok and Achol cooking together at home. Photo: Glynis Quinlan.

“No one in Canberra is doing South Sudanese cuisine – that’s what White Nile Women can offer,” Sandra said.

“People will get to know them and long for their food.

“It’s really healthy. They sometimes use vegetables that we’re not familiar with and so it’s a real cultural experience.”

“These women are examples of resilience and courage and as soon as Canberra gets to know about them they will want to support them in their journey.”

Anyone interesting in booking White Nile Women or in finding out more about their catering business should email whitenilewomen@gmail.com.

Had the absolute pleasure of meeting these 3 ladies and eating their fantastic food last night. Can’t recommend them highly enough <3

Can’t wait to try that!

Wishing you ladies all the best 👍💕😘with your new business 😘💕

Thanks for the coming to meet with White Nile Women and for your write-up Glynis! The RiotACT

It was a pleasure Sandra. They are amazing women and I wish them every success!

How wonderful. Wishing you all great success & when you have an event I’d love to come along

Hi Aldith, Just letting you know that White Nile Women will be cooking their South Sudanese food at a pop-up event for Karma Kitchen Daana on Tuesday 31st July, two sittings 6pm or 8pm. You can book here if you are interested! http://www.daana.com.au Thanks for you support! Sandra (Canberra Accelerator Lead at Global Sisters)

Wouldn’t have been possible without your commercial kitchen George!

That is awesome ladies! Wishing you every success!