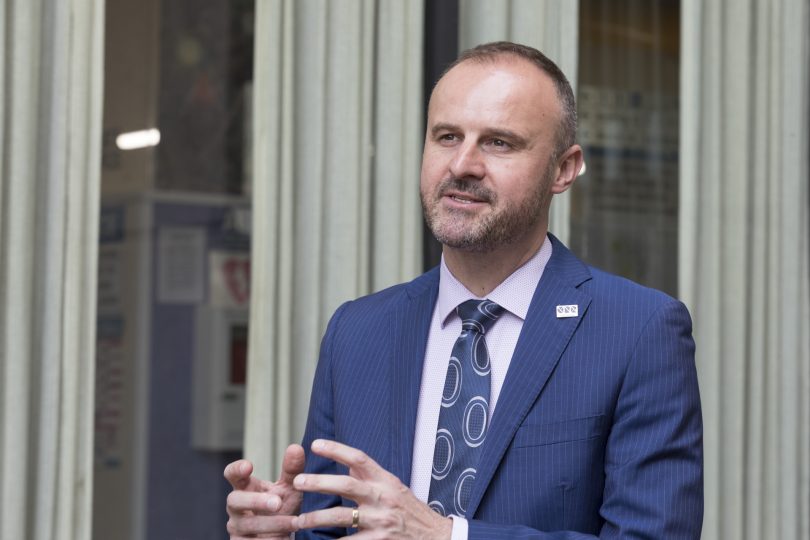 Chief Minister Andrew Barr has announced the easing of some restrictions which will take effect on midnight Friday, 8 May. Photo: Region Media.

Canberrans will be able to gather in larger groups and will be allowed out for more reasons as Chief Minister Andrew Barr announced that easing of some social distancing measures will come into effect from midnight Friday (8 May).

Indoor gatherings have been increased from two people to 10, providing everyone maintains good hygiene and remains 1.5 metres apart where possible.

Weddings, auctions and open houses will now be allowed to have 10 people with the same caveats in place, while funerals will have special provisions to allow 20 people to congregate indoors or 30 people outdoors, excluding those conducting the service.

Private worship can also go ahead with up to 10 people, excluding the celebrants.

Canberrans can also head to the park to kick the footy over the weekend and participate in boot camps, but contact sports are still off the table and sharing equipment is not allowed.

ACT Government playgrounds remain closed, however, those managed by the National Capital Authority will be open this weekend.

Until there is a vaccine, there will be a higher level of risk management in place, Mr Barr said, flagging that large crowds still need to be avoided and good hygiene should be practiced.

“The easing of restrictions is not a license for people from multiple households to have a party,” he said, flagging that the territory was taking a cautious and staged approach.

“The absolute worst thing we can do is move too quickly and not be able to respond immediately to any outbreak.”

The announcements came after today’s National Cabinet meeting, where Prime Minister Scott Morrison revealed a three-stage road map the Government would be using to open up the economy and loosen restrictions.

Mr Morrison flagged that it was still up to the states and territories to decide which restrictions they removed and how quickly they reopened businesses in their jurisdictions, as each is in a different position.

The Prime Minister said he expects the economy to be unlocked by July, but that any changes to Australia’s border restrictions are still a long way away.

Gatherings of up to 10 people and five people in the home will be allowed in Stage One, while children will be back in classrooms and playgrounds.

He also noted the “easing of restrictions for funerals with up to 30 attendees, outdoors, and 10 at weddings”.

“Golfers back on the green. Lap swimmers back in the pool. Boot camps back in the parks. Retail and small cafes and restaurants reopening. Interstate recreational travel starting again.”

When asked why small cafes, businesses and playgrounds would not be reopening this weekend, Mr Barr told reporters that he would not read out a “laundry list” of items at 2 pm on a Friday and expect businesses to open the next day.

Discussions on opening up small businesses are continuing, and discussions will continue next week, he said.

Larger gatherings of 20 people will then be allowed in Stage Two, including at cinemas, galleries and more retail shops.

Organised community sport will also be back on the agenda.

Stage Three would then let up to 100 people gather together, Mr Morrison said, but the measures for the second and third steps will become clearer as we continue to weather the pandemic.

“So there will be more work to do on Stage Three. But most workers, by then, will be back in the workplace. Interstate travel will likely resume. Pubs and clubs with some restrictions will be open, and also possibly gaming venues,” the Prime Minister said.

By Stage Three, most of the economy will be reopened and the majority of people will be back at work. Treasury is expecting 850,000 jobs to be restored in the coming months.

Measures will be reviewed every three weeks.

“Not everything will go to plan. There will be inconsistencies. States will and must move at their own pace, and will cut and paste out of this plan to suit their local circumstances.

“There will undoubtedly be some human error. No-one is perfect, [but] everyone is doing their best.”

Hanging for a schooner.

So the State is basically telling us that we cant have more than 100 people in a church service?

More than 100 people at a time would be in a shopping centre, or a workplace – I’ll bet they don’t limit that to 100 people.

I’m starting to think Cov19 is really all about a push for control, control and more control – not health. An opportunity to pursue the globalist Problem – Reaction – Solution methodology by manufacturing the problem in the first place.

There is a new movie coming about about all this – pretty damning.

True the shopping mall comparison.
Control? What makes you think there was ever a “control” problem in Australia?
There are easier ways to enforce “control” over people.
Population = Economy.
That’s the only agenda.

The difference is in the balance of the risk-reward matrix for those things.

There is a clear economic and social benefit from allowing shopping centres to open and due to their size, it is far easier to maintain social distancing.

This is far more difficult for larger gatherings of people in one place (like a church) and the benefits derived from that type of activity are not as great.

Alex Nicolson - 5 minutes ago
Albert Blair It did show the gubmint was trying to do something but I agree it seemed pretty ineffective. View
Scottie Zuxkerberg - 6 hours ago
I had no idea these vouchers were on offer, so a 100% total failure from my perspective... pretty much the usual from this in... View
Daniel Oyston - 6 hours ago
Scott Abela sorry, confused how free parking would fix it all 🤷‍♂️ View
News 35

Tim Evans - 18 minutes ago
They were useless. View
Justin Alexander - 6 hours ago
Bekah Glaz there are drastic shortages in certain subjects (in some schools 70% of their “maths” teachers aren’t traine... View
Bekah Glaz - 7 hours ago
Justin Alexander I moved to ACT from WA, and couldn't get a job in teaching. There isn't a shortage of teachers, there is a s... View
Community 1

ChrisinTurner - 4 hours ago
Is this another example of land speculation like City Block 1 Section 96? View
Property 10

Kate Eliza - 6 hours ago
Hristo we are building a farm house right now and can Def attest to the huge increase in costs of building materials.. and di... View
Sheridan Burnett - 7 hours ago
Hristo Vizovitis Well if they could provide the victims with proof that this happened then they would have nothing to worry a... View
Sheridan Burnett - 7 hours ago
Joel Byatt Would be nice if they can provide proof to the victims. Other developers seem to have been able to operate under t... View
Property 64

@the_riotact @The_RiotACT
The ACT Government will begin consulting with communities about what they'd like to see done with their local, dryland ovals which can often be underused. Possible uses include nature parks, dog parks, BMX tracks and micro-forests https://t.co/HcntqpP2Cc (31 minutes ago)