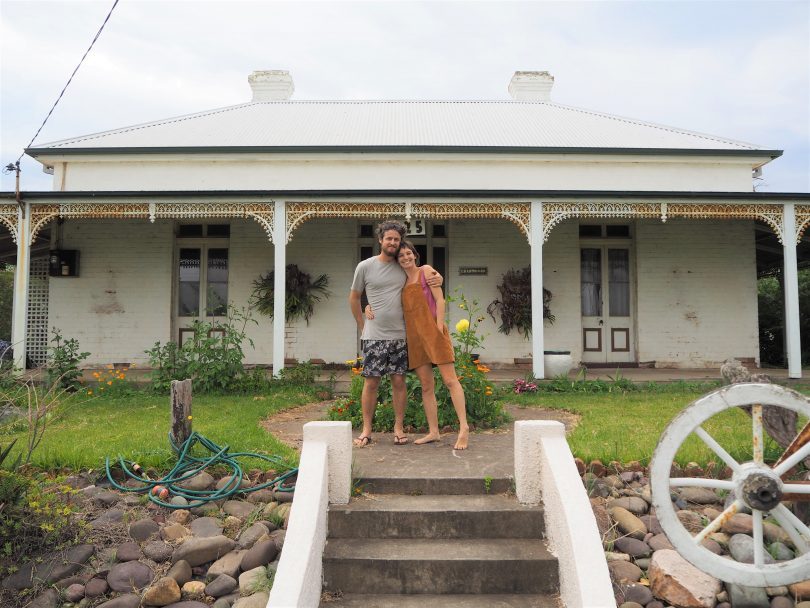 Carly Farrugia is standing on the third level of scaffolding, scraping loose paint flakes from the 12-foot ceiling of her new kitchen in Bega.

“The appeal of the house was how run-down it was,” Farrugia laughs. “We wanted a future home but we also wanted a massive project, something with the kind of character that warranted putting a lot of work into it.”

Farrugia and her partner, Brogo-raised carpenter Liam McManus, certainly got what they were looking for when they bought ‘Cranbrook,’ a nine-bedroom house dating from the late 1800s, in October last year. 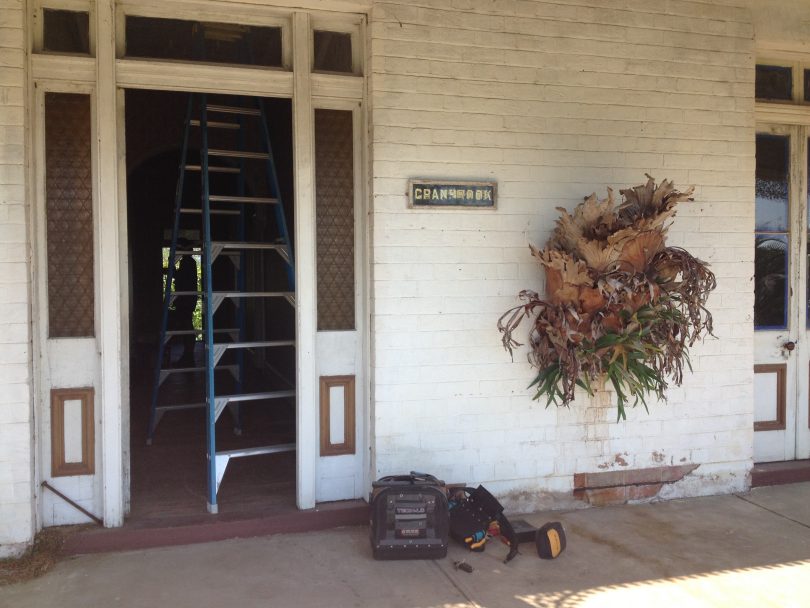 Many people noticed when the iconic house came onto the market for the first time since it was purchased by the Williams family in the sixties. Since the sale, neighbours have continually dropped by to meet the new owners.

For now, McManus and Farrugia plan on making the house rentable while they are on a three-week leave from their jobs in the Northern Territory, but in the near future, they plan to call the Bega Valley home. 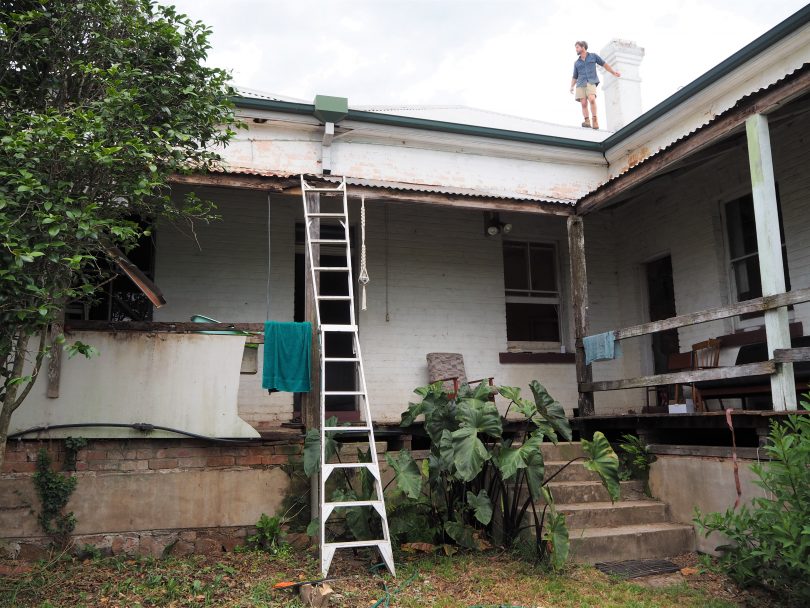 McManus on the roof of Cranbrook and a view of the back entrance, with two servants rooms off the veranda to the right. Photo: Supplied.

With the exception of a new roof, the house was apparently untouched since the sixties.

“It was quite oppressive when we first saw it,” says Farrugia. “Some rooms were so dark and the kitchen had smoke stains, mould on the walls. It was certainly not homey and I was worried that we had agreed to buy this big creepy manor that we would never feel comfortable living in.”

Originally a subdivided 20-acre property in the ‘new-town,’ on the outskirts of Bega, number 225 Newtown Road was built at a time of great prosperity in the Bega Valley, says local historian Fiona Firth, who has examined the house and done some preliminary research about the ownership of the property.

“The house was built by Henry Skillman, who was the inspector of schools in Bega then,” Firth explains, “and it was a very prestigious home, very ‘look at me.'”

Firth, poring over documents connected to the house which were kindly included in the sale by William’s daughter, says that in 1883 a report to the government following an inquiry into the Land Acts of 1862 said that the Bega District was ‘one of the wealthiest districts in the colony’.

“The population of Bega was growing rapidly at the time Cranbrook was built,” says Firth. “In 1851, there were 770 white fellows from the Victorian border to up past Tathra, but by 1891, in the township of Bega, there were 2000 white residents.”

Arriving in Bega a few days before the New Year, McManus and Farrugia immediately set to work warming the house, holding a New Years Eve party/working bee which attracted dozens of their friends and family. 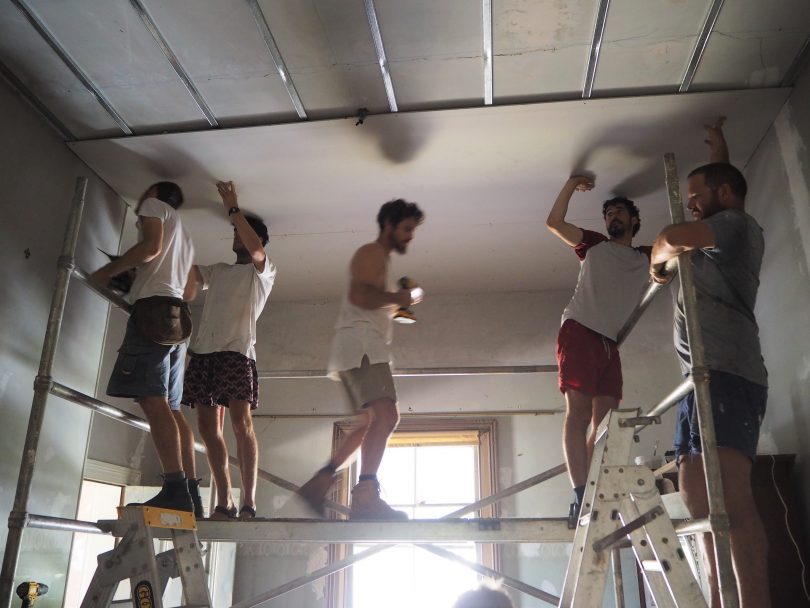 The three-week-long renovation of Cranbrook was a community effort. Photo: Supplied.

The whirlwind of visitors and helpers hasn’t ceased since the New Year and has left the many rooms of Cranbrook with “full of love and generosity,” says Farrugia as she and McManus run from room to room, setting workers up with basic plastering skills and ferrying the in-demand ladders and scaffolding from project to project.

“Everyone who has come has contributed something, even the children,” says Farrugia. “It’s been amazing how each person has laid claim to a job, whether it’s washing walls with sugar soap, pulling weeds or repairing the ceiling.” 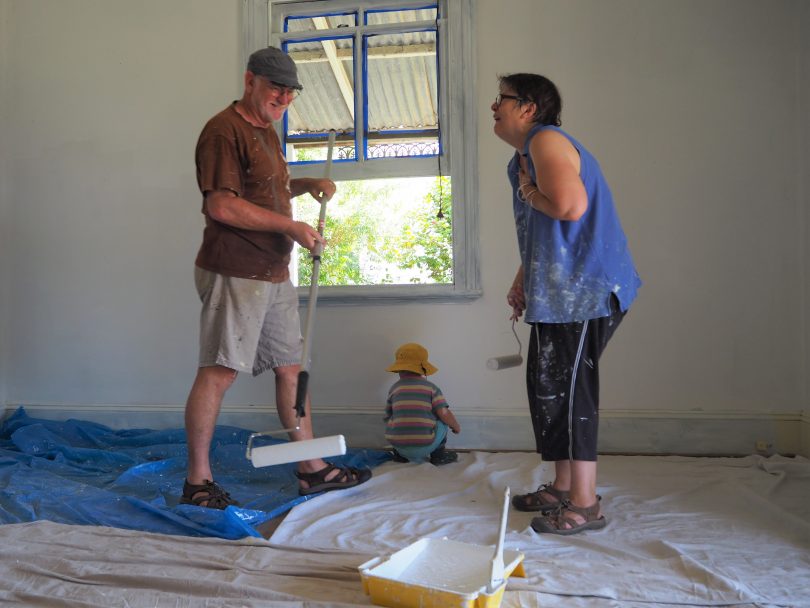 Taking on a house in superficially poor shape is a way of buying a fantastic house at a reasonable price, McManus muses, adding that they couldn’t have done it without their friends and family kicking in.

“Their help has made this house accessible to us,” McManus says. 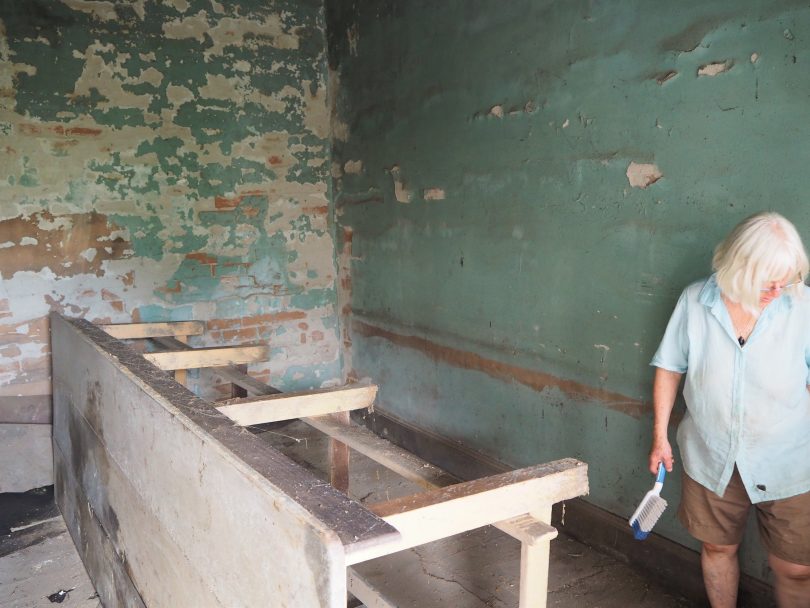 McManus’ mum, Averil Fink, has committed to the renovation project from its inception, tackling the overgrown garden amongst other jobs. Fink is pictured in one of the back rooms which were likely used as servants quarters. Photo: Supplied.

While McManus is relieved to be working away from the extreme heat of the Northern Territory [“it’s pretty attractive to be able to get in a roof cavity at midday and not die,” he says dryly] Farrugia has developed a close working relationship with the people at Inspirations Paint in Bega.

“We love Julie at the paint shop,” Farrugia laughs. 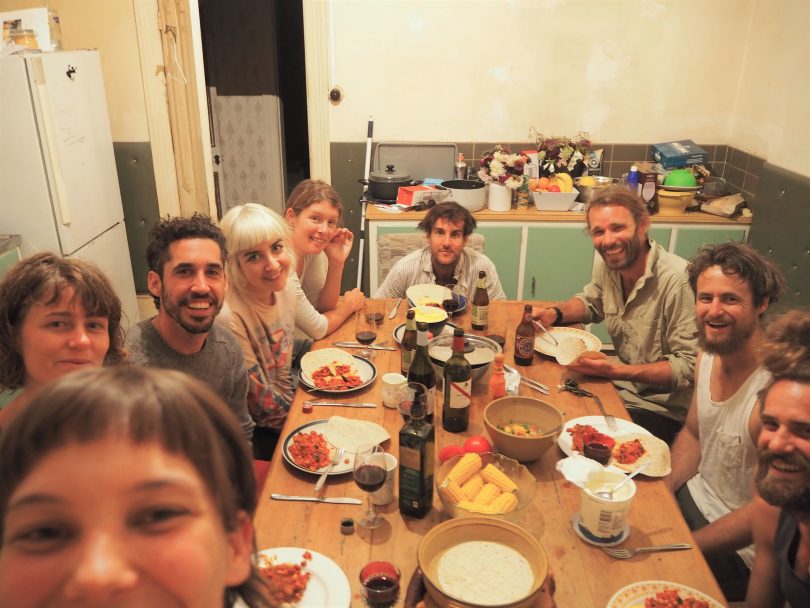 Those who have contributed their time to the renovation project have also filled the house with warmth, says Farrugia, pictured in the front left with a table full of friends. Photo: Supplied.

The couple plan to rent the house in the short term until they are freed up to live there permanently.

In the meantime, Farrugia’s initial fears have been abated.

“At night, when everyone goes home and Liam and I are there on our own, it does feel like a home,” she muses, turning her attention back to the job at hand.