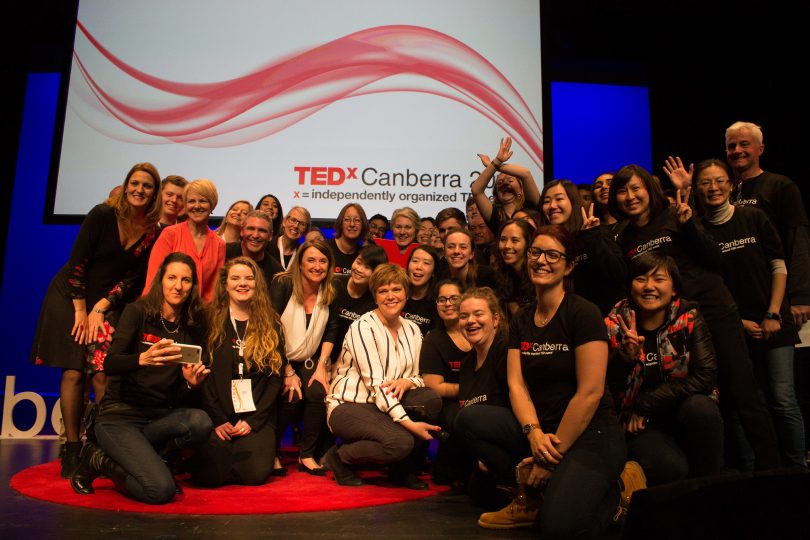 ‘Divergence’ is the theme at TEDxCanberra in 2018. It’s a theme that suggests exploring solutions beyond the norm, breaking patterns and challenging assumptions.

In a city overly familiar with people of rank and office, TEDxCanberra boasts a program that puts lesser known people of standing, experience and wisdom centre stage across a suite of ideas and issues. The line up of speakers include:

The ACT government is promising zero greenhouse gas emissions by 2045. Now that the promise has been made, how will this community take control?

Antonio is a Senior Manager of Climate Change Policy in the ACT Government and is responsible for developing and delivering policy to mitigate and adapt to the warming and drying climate.

Tasneem’s greatest passion in life is to utilize her expertise in cognitive computing, behaviour mining and gamification to transform the education system.

Can sharing a meal with a total stranger change the world? Penny Elsley believes it can.

After a two year quest to discover what the world actually needs, Penny founded the not-for-profit organisation ‘joiningthedots’, which advocates The Welcome Dinner Project, an initiative that gives newly arrived Australians a platform to connect with communities and overcome isolation through shared potluck meals. 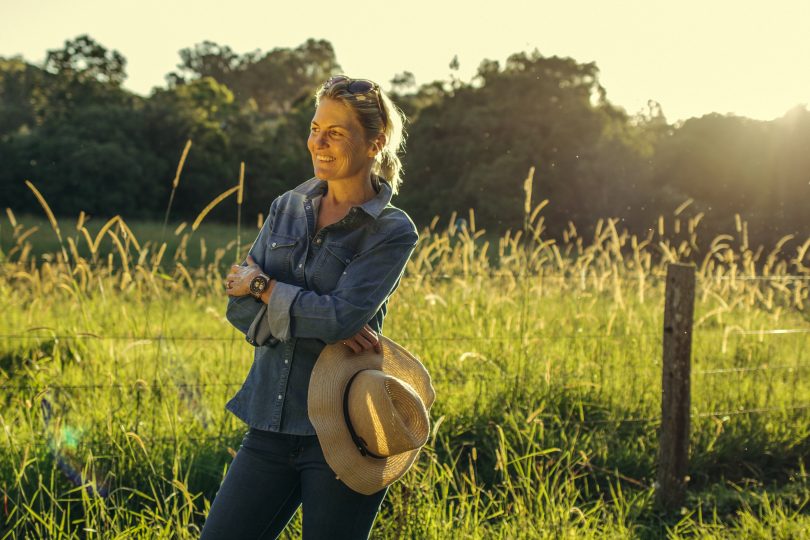 As a reformed alcoholic, Shanna has used her own journey and her social media platform ‘Sober in the Country’ to effect real change in what she calls rural Australia’s ‘casual alcoholism culture.’

She’s also challenging how we deal with addiction in rural areas. Shanna’s goal is to secure funding and take her platform national, to reach our most isolated and vulnerable community and farming members.

How can we significantly improve human health and save the planet? The answer: Regenerative agriculture.

With his 36 years of experience farming his family’s farm on the Monaro and a PhD in human ecology, Charles has literally written the book on regenerative agriculture, an idea that challenges industrial farming techniques.

During his time in the army, Paul was severely injured during a parachute landing which left him with physical injuries and PTSD. It was the PTSD, in particular, that would leave lasting effects on his life.

What followed for Paul also involved time in jail, where a unique perspective and idea was forged. Paul now wants to create a prison system that actually works.

Seven in ten Aboriginal and Torres Strait Islander children have scabies at any given time. What if we could use traditional Aboriginal bush medicine to treat it?

Dr Jackson Thomas is a pharmacist and academic scientist at the University of Canberra who studies child health in Indigenous Australian communities. Together with his research team, he has been testing an Aboriginal bush medicine-based treatment and its healing practices. 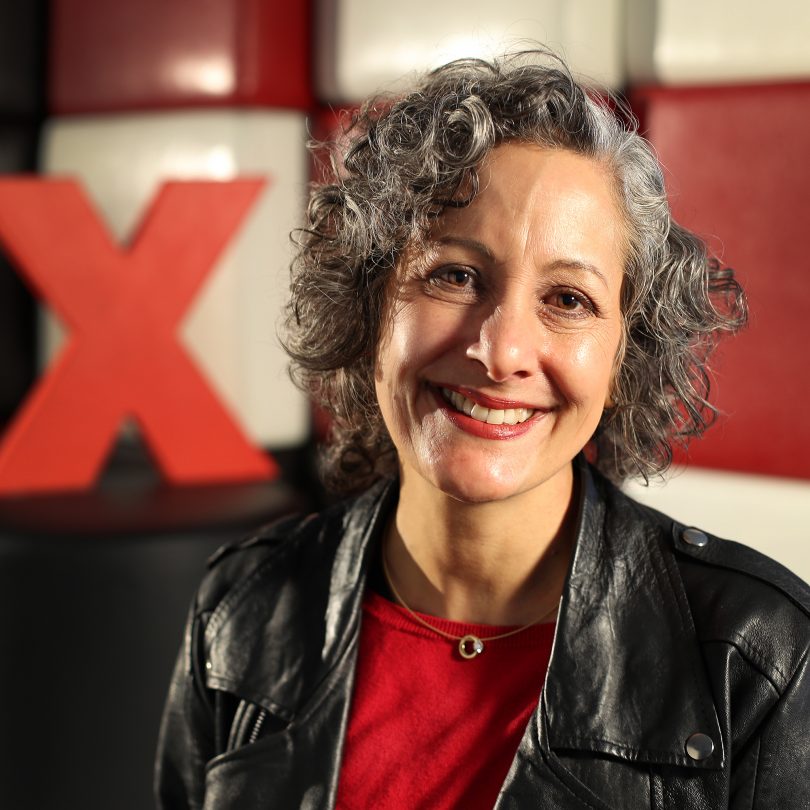 Australians’ current life expectancy is 82.5 years, that’s 10 years longer than in the 1970s. We’re all living longer, but do we really understand what that’s going to mean for us?

Dr Catherine Rickwood is one of Australia’s leading experts on the topic of longer lifespans, and founder and CEO of consultancy and advisory firm Three Sisters Group. Catherine is also an Academic Mentor on the Master of Management (CEMS) program at the University of Sydney.

The portraits you hang on your wall mean something. They have the potential to shape identity, relationships, and how you perceive yourself.

Jolly is a Canberra-based portrait photographer who takes legacy portraits, portraits that are beautiful enough to be hung on walls and cherished for the lifetime and then passed onto future generations as a legacy. 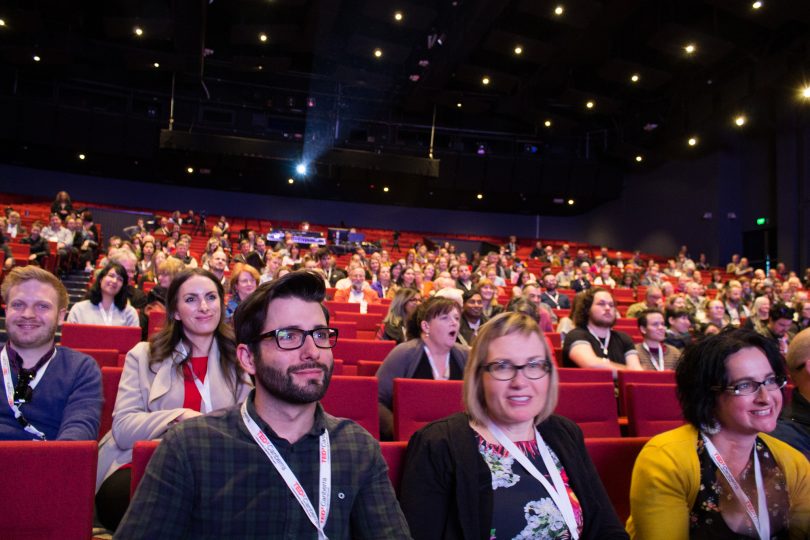 The crowd builds and waits in anticipation at TEDxCanberra 2017. Photo: Supplied.

Check the TEDxCanberra website for more information and a look back at the 2107 event.

TED has become a global not-for-profit movement devoted to spreading ideas, usually in the form of short, powerful talks of 18 minutes or less.

Emerging from the big hair and fluorescent colours of America in 1984, TED started as a conference where Technology, Entertainment, and Design converged. Today, each event covers almost all topics, from science to business to global issues, in more than 100 languages.

Running with that TED spir­it of ideas worth spread­ing, TEDx events are loc­al, self-organ­ised days that bring people togeth­er to share a TED-like exper­i­ence.

Over 3000 volunteer hours go into TEDxCanberra. Since 2010, this band of big thinkers has run at least one major, all-day, con­fer­ence every year. 2018 will be the 15th local event they have delivered.

TEDxCanberra happens on Saturday, September 8 at the Canberra Theatre Centre. Tickets are available until September 1.

Michael Drew - 17 minutes ago
Vickie Quinn eventually?!!? Hasn’t the total amount of public housing gone down in recent years. Does Labour care?... View
Ray Young - 34 minutes ago
Knew it... I lived there once for a short time and... yep, knew it would happen. View
Vickie Quinn - 35 minutes ago
Margaret Dudley well they need to so they can support the social housing initiative and grow the housing portfolio to house m... View
News 20

Penelope Pollard - 21 minutes ago
I have beautiful handmade ones that were lovingly made by my mum and sister in lockdown in Melbourne..get sewing people! View
Kate Goldsby - 1 hour ago
Wendy yeah I won’t bother making them I’d just pay someone, but yes, I need to get some For everyone View
Ãine Ní Tighearnaigh - 4 hours ago
Better to be proactive and wear a mask to reduce the risk. Many people just don't observe the Physical Distancing requirement... View
News 20

Ray Young - 35 minutes ago
I remember that... it rocked us all... View
Gabriel Spacca - 2 hours ago
I’m shocked. Shocked I tell you.* *May not contain actual shockedness.... View
Russell Nankervis - 2 hours ago
I lived in Bathurst at the time but came for tertiary open day in 2010. Had to drive up the round a bout in Mitchel to get ar... View
News 26

Bill Gemmell - 36 minutes ago
I will certainly look at it but am worried this proposal will lead to price inflation from suppliers and installers. View
Robyne Mitchell - 37 minutes ago
Clinton Berry yes they can better preparation of road base in the first place View
Jack Hearps - 37 minutes ago
David Jackson and 'muppets' show is copyright by ScoMoses for the LP ... remember Turnbull debacle when looney religious zeal... View
News 5

Emma Davis - 3 hours ago
And you are 100% correct! View
Heather Rattenbury - 6 hours ago
Put the call out... there are probably 100’s of people out there that could help with this View
Alex Elliott - 6 hours ago
Tarz Lam I'm all about finding solutions, getting things done, and finding reasons to move forward so all ideas are welcome.... View
Property 73

Eight things to do around Canberra this weekend (14–16 September)