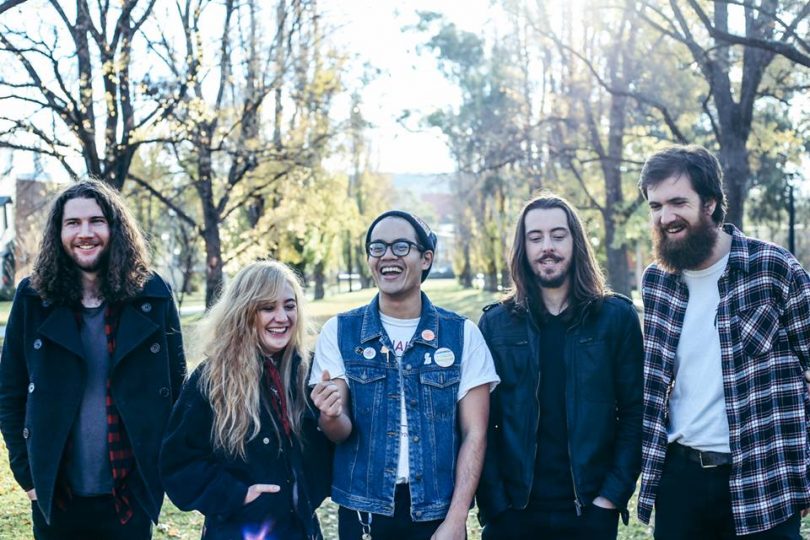 Youth is a time of many, many different emotions. For many of us we don’t begin to find our feet until the end of primary school. As we move into high school we start to form our own identities and seek out like-minded individuals around us. As we change through the years of this time so can the soundtrack that comes along for the ride. Looking back it can sometimes be embarrassing, shameful or even joyous to remember the tunes of our youth. However, through the sepia toned lens of nostalgia it is always an alley off memory lane worth travelling.

I asked Canberra DIY legend Azim Zain (Azim Zain & His Lovely Bones, Elk Locker, Slagatha Christie) about the soundtrack to his youth. Here are ten tracks for your listening pleasure:

10. IN KEEPING SECRETS OF SILENT EARTH: 3 – COHEED AND CAMBRIA

I couldn’t talk about songs that shaped my youth without talking about my favourite band in the world. This band and this album in particular encapsulates so many elements from so many musical genres I love, and combines it with a degree of nerdiness and sense of ambition in songwriting that made me such an insufferable wanker as a teenager (and now).

The movie Once was my main introduction to singer/songwriter-focused indie folk. Even though “Falling Slowly” was the big hit from that movie, the way Glen Hansard goes from delicate to borderline screaming is something that struck me deeply and has shaped so much of my music taste, and eventually the way I wrote music myself.

What would a list of songs that shaped my youth be without the token Weeb entry? I watched a lot of anime and J-dramas in my teens which got me into quite a few Japanese bands. It culminated when I went into a random Japanese Tower Records with my host family while on exchange and impulsively bought this featured album by a band I knew nothing about, and now I still love it and hold it very dearly in my heart.

Continuing from the last entry, The Blackening is still one of my favourite albums of all time. It’s one of the few metal albums I still listen to. That’s all.

6. HALLOWED BE THY NAME – IRON MAIDEN

In 2007, there was a new kid who transferred to my school and he was the first person to teach me gradually how to appreciate metal and played in the first band I ever was in with me. Starting with older metal like Iron Maiden and Metallica helped me slowly get into heavier and heavier music which shaped a lot of who I am and was.

Similar to the next entry, except this was my introduction into being into indie music sung in Malay. Growing up in a bilingual family that spoke English primarily, I never really listened to music in anything but English until this song, which I still sporadically cover.

On a more serious note, the effect of the postcolonial hangover in my homeland of Malaysia (and elsewhere) has reached even into perception of contemporary music. Even today, there is still a strong attitude of “West is Best” and the idea that any music produced locally can never be as good as what is produced in the West. This song and this band changed all of that for me and it’s shaped my support for music at your local grassroots level (especially in DIY)

3. CUTE WITHOUT THE (E) – TAKING BACK SUNDAY

Following on from being my gateway to alternative music, Taking Back Sunday introduced me to “emo” (don’t @ me with that real/fake emo spiel). As cringy as some of the early TBS lyrics can be, it definitely shaped teen years.

As uncool as it may sound today, Green Day’s American Idiot was my gateway to punk and alternative music as an nerdy, socially-awkward preteen looking to find something to make himself seem cooler. It prompted me to start drumming which eventually led me to learning guitar and now, songwriting. This song was always my favourite from the album and I think, the most underrated.

1. ALWAYS GET HER WAY – SMASH MOUTH

Look, Get The Picture by Smashmouth was the first album I ever bought with my own pocket money when I was 13 – I don’t know why. But listening to this again, I know for sure that this album still unironically slaps and is written WAY too well considering the meme status of “All Star” (“Hang On” came a close second as best song on here).

harcm - 9 hours ago
Here's another idea. Let's think of the intersection as cars crossing the pedestrian path, rather than pedestrians crossing t... View
jam - 12 hours ago
That said, though, bikes are required to slow to around 10km/h before crossing - a bike crossing at the otherwise speed limit... View
jam - 12 hours ago
It is not “bugger all inconvenience” it actually makes a big difference when it is your commute! When I drive past a cros... View
News 9

bj_ACT - 10 hours ago
Noting the Light Rail is much much more heavily subsidised than the buses. View
jam - 11 hours ago
The tram is more easily accessed by more people as it encourages dense development within its reach. It isn’t really possib... View
bj_ACT - 12 hours ago
The issues with the Bus route changes and the loss of bus stops for Tuggeranong in 2019 were obvious to anyone with half a br... View
News 161

Jimbo Lambert - 12 hours ago
Areas in Gungahlin haven't been mowed for at least 6 months! How hard is it to use our high rates money to employ some more m... View
Jimbo Lambert - 12 hours ago
Randy Goldberg you mean 6 months later? You must live in a more affluent area than Gungahlin, as it seems we have been alloca... View
Frank Arnold - 15 hours ago
Ohhh myyy Goddd !...Crooked pavements!...pot holes in our roads!...and now it's long grass !!!! FFS we hardly had any 3/4 yea... View
Community 6

The Ballad of Brave Sir Andrew

Floriade in the suburbs kickstarts spring

@the_riotact @The_RiotACT
There's more to hosting global #sporting events than stumping up cash to the organising body - you also need #venues which, as Tim Gavel notes, is also a problem for the ACT https://t.co/1ivTV1rHfA (55 minutes ago)