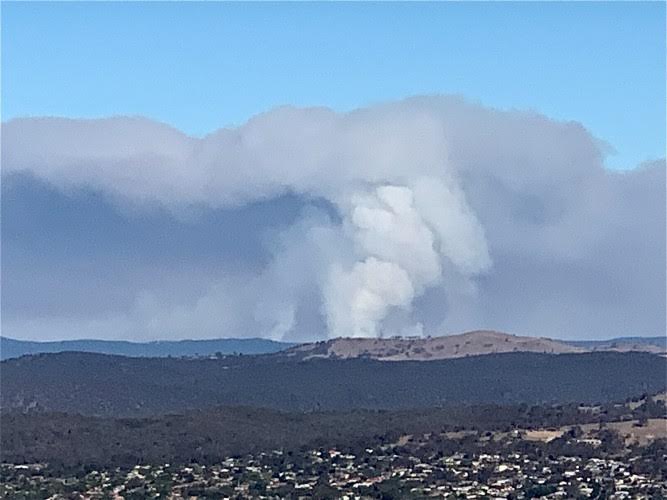 The bush fire in the Tallaganda National Park has grown to cover over 1150 hectares and is burning on multiple fronts. Photo: Supplied.

The ACT will be under its third total fire ban of the month between midnight tonight and midnight Friday as the Fire Danger Rating is set to reach severe.

Dry conditions with a top of 34 degrees on Friday has led ACT Emergency Services Agency (ESA) Commissioner Georgeina Whelan to declare the Territory-wide ban, as any fire started may be uncontrollable and move quickly.

West of Braidwood, the Rural Fire Service has issued a ‘watch and act’ alert for the North Black Range, Palerang fire, which is out of control.

The bush fire in the Tallaganda National Park has grown to cover over 1150 hectares and is burning on multiple fronts.

The fire is burning towards Forbes Creek, Hoskinstown, Muloons Creek and Bombay as firefighters and aircraft are working to slow the spread and notify residents in the area.

The fire has been burning since Tuesday, started by a dry lightning strike. The fire was reportedly first spotted by an aircraft passenger who told authorities.

The area is notoriously rugged, making the fire hard to access and fight.

The ACT ESA says there are no fires burning in the ACT and although large plumes of smoke can be seen from NSW fires, no threat is posed to the ACT.

Under a total fire ban, it is an offence to light, maintain or use a fire in the open air, use fireworks in the open air, or undertake a high-risk activity which may cause a fire to ignite including welding, grinding, soldering and gas cutting.

The use of slashers and harvesting machinery in rural areas is also prohibited.

Strict penalties apply to persons who undertake any of these activities without a fire permit.

Public reserves, camping grounds, forests and other remotes areas may also be closed during a total fire ban, with a full list available on the ACT Parks and Conservation website.

If you are in a bushfire prone area, the ESA is urging you to review your bushfire survival plans or to quickly create one if you don’t already have one in place.

To find out more about Total Fire Bans, including any closures or restrictions visit esa.act.gov.au or call Access Canberra on 13 22 81.

Residents can monitor fires in NSW and the ACT via the NSW Fires Near Me app.

Robyn Baer - 1 minute ago
Stephen Page-Murray same. Medical reasons. View
Kylie Campbell - 2 minutes ago
Celeste Cummins always have been not about to change now... View
Lin Van Oevelen - 31 minutes ago
David Brown Did you look at the information from Cambridge University I posted? View
News 13

Jamie Peterson - 3 minutes ago
This article is the same as a puff piece for Andrew Barr 😂😂😂😂😂😂😂😂😂😂😂😂😂😂😂😂😂... View
Margaret Freemantle - 25 minutes ago
So why have the light rail service frequency been wound back? No notice at all - just went to catch the tram at the weekend a... View
Jim Jim - 33 minutes ago
The ‘Riot Act’ should rebadge itself the ‘Quiet Act’. Never a tough question asked of this government always patting... View
Food & Wine 37

Shay Daisy - 25 minutes ago
I’ve been happily car-free for 3 years now. Belconnen suburb home, commute via bike to work (changed with covid). Shopping... View
chewy14 - 3 hours ago
If you added in the benefits in efficiency savings for owning your own car, the difference would be huge. For anyone that doe... View
Gibbo - 6 hours ago
Had no car and license before moving to Canberra. Within 18 months it became essential to have a car be able to get anywhere... View
Lifestyle 64

May Claydon - 36 minutes ago
When will they be in Woden and Tuggeranong. They are not in Canberra. Only Nth Canberra... View
Tom Adam - 1 hour ago
Elroy, 😆 it is on the news. My remark is that a pair of non-Canberra businesses are getting so much free advertising from... View
Elroy Jones - 1 hour ago
Tom Adam no stake - its just got nothing to do with you or your small business. With respect, if your business was newsworthy... View
Opinion 14

HiddenDragon - 2 hours ago
The attractiveness, or at least acceptability, of online learning for international students will surely depend on whether th... View
Janet Mulgrue - 3 hours ago
I did my masters by correspondence before the days of online study. I found it great as I was also working full time. I was a... View
Anissa Jones - 4 hours ago
An article written by a non-teacher commenting on educational practices. What’s wrong with this? Hrmmm Could it be he has n... View
Community 2

RobS - 3 hours ago
After *seven* years of trying to try to bring pressure on the ACT Government (I was a member of the Wright Residents Group) t... View
Property 2

It's no secret to locals that the Garran shops are thriving at all times of the week. But business owners...
Food & Wine 37

My all-time favourite food film is the 1985 “ramen western” Tampopo. In it, hapless heroine Tampopo, lumbered with a failing...
News 37

A backlash from motorists has seen a large number of 80 km/h speed signs knocked over along Sutton Road after...
Opinion 34

@The_RiotACT @The_RiotACT
The story of playwright, farmer & war hero Millicent Armstrong isn’t widely known, but actor Dianna Nixon will be bringing it to life at the Gunning Arts Festival this month https://t.co/uYoRhqQmOy (1 hour ago)

@The_RiotACT @The_RiotACT
Corrections officers are expected to clock more than 35,000 hours of overtime this financial year as they scramble to cover shifts at the Alexander Maconochie Centre https://t.co/tztW3SQLGo (5 hours ago)