Tourists flocking to the Kingston Foreshore? 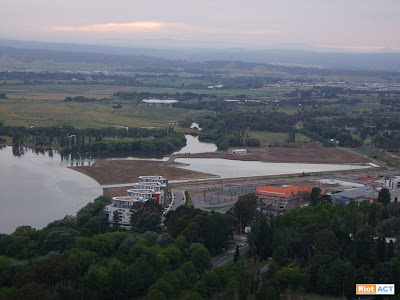 Chief Minister Stanhope is rather chuffed that his Land Development Agency (LDA) has won the Urban Development Institute of Australia (UDIA) National Award for ‘Urban Renewal’ for the Kingston Foreshore Development.

UDIA judges praised the innovative approach of the Kingston Foreshore Master Plan which integrated existing landmark buildings and aligned to the Griffin Plan.

The judges also commended the environmental sustainability of the site, its generous use of public space and amenities as well as the revitalisation of the old industrial precinct.

I’m sure it’s lovely down there but I was struck by this line:

“As well as being a spectacular place to live, the Kingston Foreshore, which includes the harbour development, is quickly evolving into a fantastic tourist precinct, with waterfront parklands, boardwalks, cafes, restaurants and speciality retail outlets planned for the near future,” Mr Stanhope said.

Can anyone imagine a bored New Yorker (or even a Sydney sider), flipping through their travel leaflets, and saying “Oh my dahlink, there’s a mahvellous urban renewal project on the foreshore of Lake Burley Griffin, tell Jeeves to cancel the trip to Aruba and we’ll go there instead”?.

At what level of the tourism market is the Kingston Foreshore going to be preferable to any of a million other places in this world?

Or are Canberrans trekking to an entertainment precinct from elsewhere in the city now tourists?

Or does he mean they’re going to deposit tourist buses there and hope they don’t hate it because they don’t have any choice anyway?

16 Responses to Tourists flocking to the Kingston Foreshore?
Filter
Showing only Website comments

Summary of this thread for the time poor:

Oh noes! Someone is building something that might cater to a market that’s not me! And even they are trying to cater to me, I wouldn’t be caught dead there! So that way everyone except me loses!

The Foreshore should be good when it’s completed. I was worried that it was all going to be ueber-pricy boutique shopping and unaffordable restaurants, but think there’s a good chance that some more community-style facilities and alternative attractions (like the Glassworks and BDM) will be in the mix.

The Real Estate will be pricey, though. Don’t know how glad I’d be to shell out $1m for an apartment that was built on reclaimed land….

Well, I’m a New Yorker that’s already in Canberra, and wouldn’t be caught dead there(unless my pants were down)
I don’t know why tourists come here either; to visit the city that was solely chosen the capital because it was supposedly halfway btw Sydney & Melbourne??? I’m guessin’, more political theatrics went into usurping such a decision than there are politicians in Parliament Theatre.

They’ll be getting nice and wet if they are still there now!

Can anyone imagine a bored New Yorker (or even a Sydney sider), flipping through their travel leaflets, and saying “Oh my dahlink, there’s a mahvellous urban renewal project on the foreshore of Lake Burley Griffin, tell Jeeves to cancel the trip to Aruba and we’ll go there instead”?.

You will be if you keep babbling.

that one went up, so i’m not in a mod queue then?

this is very weird – where’d my comment go? i was on first and saw it in the comments field after i posted it.

He probably means the glass house and the kingston markets. Other than that, it’s just kingo shops . . . I’m just annoyed that the actual harbour precinct is very exclusive.

As most tourists “do” Caberra in one or two days, I cannot see them rushing down there for whatever it is is there…

I said it before, they need a large pier and an anchored ship as a floating restaurant, wedding venue, etc.

Agree fully. I wish they would hurry up and go ahead with the Civic foreshore redevelopment that they have planned as part of the Griffith Legacy

I think it is lovely down there, and with the glassworks attracting visitors, and the Kingston markets, it is becoming a little tourism precinct.

I think tourists will come…there are so many place in the world where you can’t get up close to blue green alagae..

I think it’s just that tourists come to Canberra from interstate and overseas for whatever reason they come to Canberra, and while they’re here it’s a nice place for them to be and just hang out like any other waterfront space in a city.

I think with most tourist destinations you go there for a number of reasons, and hope to experience a variety of both natural and man-made features.

I said it before, they need a large pier and an anchored ship as a floating restaurant, wedding venue, etc.

Phạm Quới-Chi - 33 minutes ago
We spotted not just one , but three black cockatoos in Isabella Plains 😍 View
David Ironside - 4 hours ago
Tracey Ironside yes there a few around Fadden recently View
Sandy Gibbs - 4 hours ago
Kathy Little Suzy Obsivac these are the ones we saw on our walk today. Timely article!... View
Opinion 8

David Jackson - 1 hour ago
This is what happens when the loonies are running the asylum! Seriously it’s a correctional centre or prison. What a waste... View
Mark Huppert - 2 hours ago
If elected, the Libs will still have to operate prisons, maintain roads, pay police, maintain hospitals etc etc. Plus they wa... View
Darcy Ryan - 2 hours ago
Chairman Barr needs to go. View
Property 40

Jp Romano - 2 hours ago
Margaret Welsh move somewhere backwards. Apartments are the future. View
Margaret Welsh - 4 hours ago
Yes, and I'm not a Liberal voter these days. I hate the number of apartments. When we downsize we'll be moving out of the ACT... View
watto23 - 8 hours ago
So why can't the liberals provide a solution to this problem. They are very good at pointing out everything Labor does wrong,... View
Opinion 1

Jeremy Calero - 8 hours ago
Kaitlyn nothing will stop it lol View
O L - 10 hours ago
Wonder what that means for rental longer term? Probably go up after covid to match increase in housing values View
Community 12

@The_RiotACT @The_RiotACT
Claims of light rail contract mismanagement, disappointment for football fans & Soviet-style security cameras are just some of the featured stories in this week's RiotACT newsletter https://t.co/zoDivBOaVB (10 minutes ago)