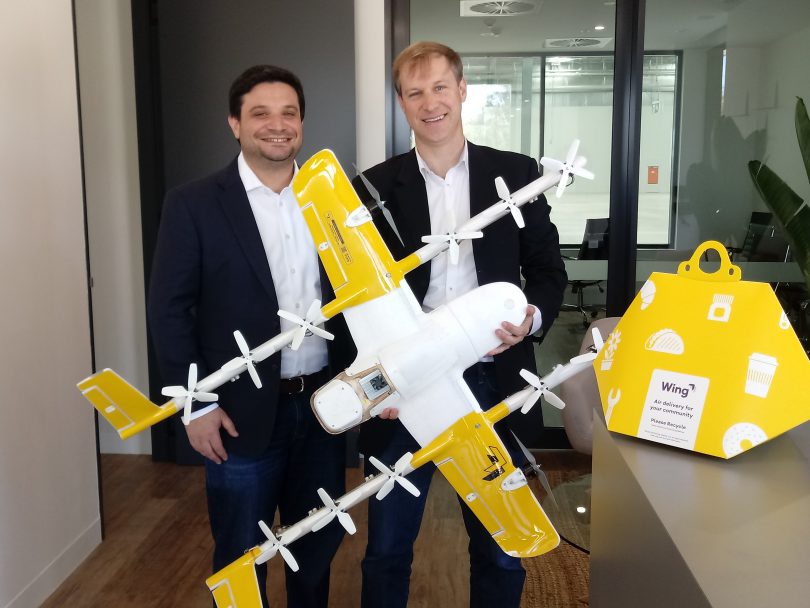 Wing’s Jesse Suskin and Jonathan Bass with one of their drones in the new offices at the company’s Mitchell warehouse base. Photo: Ian Bushnell.

Drones should be treated more like cars than aircraft, according to a Wing submission to a Commonwealth review of noise regulations.

Wing, the Google subsidiary trialling a drone delivery service in Gungahlin from its Mitchell base, says rules for traditional aircraft are not appropriate for lightweight commercial drones. But the company rejects suggestions that the Commonwealth should hand regulation to the States and Territories, saying drones should operate under a single Australian Government jurisdiction.

It argues in its submission to the Department of Infrastructure, Transport, Cities and Regional Development Review of the Air Navigation (Aircraft Noise) Regulations 2018 – Remotely Piloted Aircraft that delivery drones flying over a neighbourhood generate noise more like cars, and are replacing trips traditionally made by cars.

The company is concerned at proposed recommendations that treat a 5 kg drone as if it were a 500,000 kg airplane.

“Caps on flights or movements, typically applied to passenger airplanes, should not be applied to drone movements,” Wing says. “As delivery drones currently flying in Australia replace deliveries made by cars and light trucks to homes … not airplanes headed to airports, we’d suggest it is more appropriate to start with a regulatory framework that is more applicable to cars than commercial airlines.”

Wing says drones generate less sound than common neighbourhood noises such as cars, trucks and buses, lawnmowers and leaf blowers, and the sound does not last long.

Nobody would accept that car travel needed to be restricted so why should that argument be applied to drones, says Wing.

It argues that over time the sound of delivery drones will be accepted just like these other suburban noises.

Wing says that since its experience in Bonython, which sparked a storm of noise complaints, a stronger community outreach program and modifications to drone propellers have seen noise issues tail off to a handful. 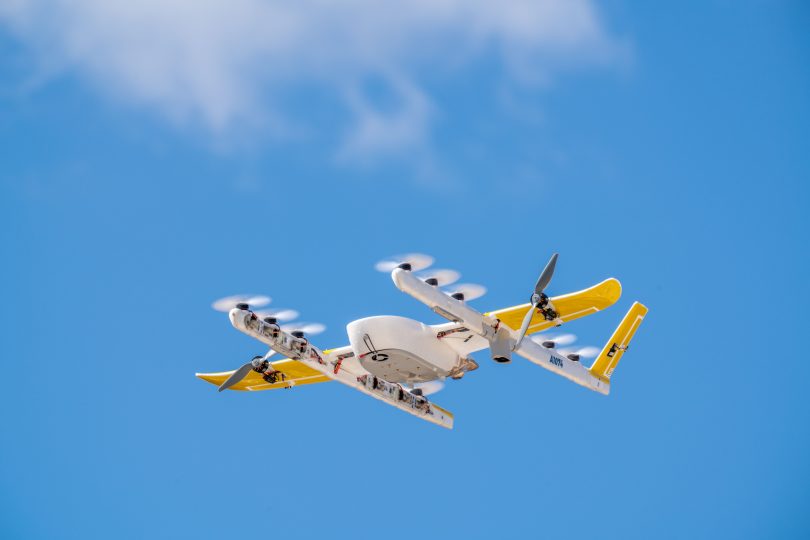 Wing drones have a range of 10 kilometres.

While Wing believes drones should be treated like cars from a noise perspective and that state and local government have avenues through the development application process to regulate noise, it argues that once a drone is in the air it should be under Commonwealth jurisdiction, for safety and business reasons.

“A balkanised airspace for drones would be unworkable (not just for delivery, but for the entire ecosystem), and immediately stifle innovation and investment in this growing space,” it says.

”With constant advancements in both hardware and UTM [unmanned traffic management] flight planning software, it is also important that any new framework has the flexibility to support and facilitate rapid changes.”

Wing says a patchwork of noise standards will slow development and the adoption of drone technology.

It also believes regulators should take a broader view of the benefits of drone delivery and not just look at things such as medical emergencies.

It insists it has no particular timeline or plans to expand or upscale its services, saying Wing will not get ahead of community expectations and the regulators.

“The outcome of this larger process will put a more permanent framework in place where we can make those decisions to grow,” says Jesse Suskin, head of public policy, Australia.

Wing spokesperson Jonathan Bass says Canberra is home to the most advanced drone delivery operation in the world.

“To maintain that leadership position we need a regulatory framework that allows industry to scale and supports additional investment and innovation,” he says.

Wing currently has 15 merchants signed up and can fly to Crace, Palmerston, Franklin and Harrison until January, when it will need to reapply to the Department.

1st world problems. Have a whinge.

Who are the 15 merchants? I’ll boycott all of them.

They go over my house all the time they are quiet loud and fly low.

Unfortunately, Australia is not reformed for this kind of technology, maybe in 15 years time you should apply for license again

Drones must be banned!

Follow the roads then and stop flying over my backyard.

David Ferguson I agree. All airplanes should have to follow roads.

I’m pretty sure cars and trucks can’t fly over your backyard.

Considering this company originally denied all the complaints from Bonython residents and publicly said residents were making things up, I don’t have much faith in the commercial honesty of Project Wing and Google.

Now they claim they have learnt a lot from the Bonython and that the suburbs residents were right to complain about the noise and the flight paths.

The whole Canberra drone trial has been a perfectly run case for how big IT companies run trials and manage media communications to achieve their own desired outcome.

Varalakshmi Nathan - 9 minutes ago
Not every one rides a motorcycle. My husband had motorcycle and had fallen off and had bruises. Same with my son also. We nee... View
Jeff Smith - 2 hours ago
Woody Brenden Don't think Public Transport is better than it used to be for the average Tuggeranong resident. View
Jeff Smith - 2 hours ago
Tania Shaw Too true Tania. My bus use to take 12 minutes and two stops from Kambah straight to Woden, the bus changes in 2019... View
News 11

@The_RiotACT @The_RiotACT
The P-plate driver accused of crashing the vehicle resulting in the death of 16-year-old Alexis Saaghy has made a brief court appearance in the ACT https://t.co/Sqb12Xd0EB (32 minutes ago)