Try not to commit any crimes if you can help it 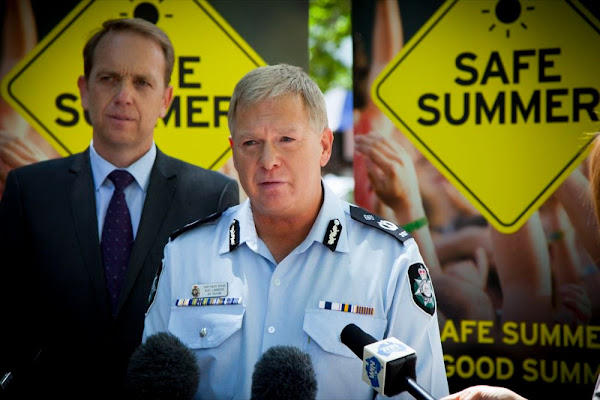 Simon Corbell today asked if Canberrans could try and behave this Summer, and not commit any crimes. Nobody has simply asked everyone to follow the law before, and I hope Simon’s bold strategy pays off. Not one to put all his eggs in one basket, Simon also informed people that there are these guys called “police” and that these police-people will punish you if you commit crimes.

You know, just in case we had forgotten what a police was.

Minister for Police and Emergency Services, Simon Corbell, today urged Canberrans to take responsibility for their safety this summer, warning that police would respond appropriately to those who engage in violent or anti-social behaviour.

Mr Corbell and Chief Police Officer for the ACT, Rudi Lammers, launched the 2013-14 ‘Safe Summer’ campaign today which encourages Canberrans to enjoy the many events over the summer period by behaving responsibly and thinking of others. The campaign focuses on alcohol and responsible drinking, the issue of party drugs, how to help yourself and others stay safe, as well as traffic and road safety messaging.

Mr Corbell said the holiday period was a busy time for everyone, with school formals and Christmas parties currently underway and upcoming events such as New Year’s Eve, Australia Day celebrations and Summernats certain to attract large crowds.

“Canberra remains one of Australia’s safest capital cities, but it’s also a busy and cosmopolitan city, with celebrations, parties and get-togethers right through the lead-up to Christmas. We would urge people not to ruin their Christmas by alcohol-related risky behaviour. It is proven that an intoxicated person becomes more vulnerable to either committing a crime, or becoming a victim of crime,” Mr Corbell said.

That last bit is my favourite.

Drunk people are at risk of committing a crime! Oh no!

“I’m so sorry everyone, I drank too much and that crime just came out of nowhere. Before I could stop I just commited straight into it. If I’d known how easy it was to accidentally commit a crime while intoxicated I would never have gone out looking for a fight while drinking.”

I think the AFP wrote this for him. We all know the police prefer to respond inappropriately. People on the RiotACT sometimes say so, so it must be true.

I particularly love this meaningless phrase “Canberra remains one of Australia’s safest capital cities” – so it’s in the upper four rather than the lower four in terms of safeness? Because if it was the absolute safest he would have said so.

Oh damn. I wasn’t aware. Now I need some new plans for Summer.

So nice of him to ask. I’m sure the Police will have nothing to do now.

He gets the prize for being the best at stating the bleedin obvious.

That’s got to be up there with that imposing sign on the Federal Highway “Thieves beware – this Territory is covered”. Is that still there?

I ran this through Google Translation and it came up with a nil result:

“The establishment of the Regional Targeting Team (RTT) in September this year in readiness for the
busy 2013-14 summer period marks the next phase in our approach of education, engagement and
enforcement, placing more resources under the RTT and attaching a dedicated intelligence officer to
the team to provide an intelligence-led focus and targeting to their activity.”

David Jongue - 2 minutes ago
Lol if you think that mock up looks bad, take a visit to south Canberra caravan Park at symonston View
Simone Sorrelle - 27 minutes ago
Russell Rowell Judy Tunningley. We (& Mark) were discussing this last night. View
Dennis Murray - 44 minutes ago
Meegan Ward What a typical Canberran response, after 45 years in Canberra it’s easy to see why I am glad to have divorced m... View
Opinion 38

Tammy Britt Welsh - 14 minutes ago
Quick find a virus, let it in the country, and get the media off the fires, and the sports rort View
Daniel Duncan - 4 hours ago
Both sides do the same thing. The only way we can get rid of them is to vote them out. View
Frank Trapani - 4 hours ago
Malcolmo Oz. No . What I am saying is; "she has not been charged with anything yet," and until is proven that she's done some... View
News 17

Paul South - 28 minutes ago
Im only aware of salvage logging in soft wood plantations . Where is it happening in our hard wood forests .? View
Paul South - 33 minutes ago
Some thing to do with active fire management , if you live in the bush and off the bush . And all you have is two legs to esc... View
Ben Roberts - 3 hours ago
Its a great idea. Long overdue. View
News 130

Jac Bec - 1 hour ago
Nicole and strain on our health care because someone chose religion over safety View
Jac Bec - 1 hour ago
Unbelievable View
Chris Ellis - 1 hour ago
Daljot why tax payers money? Crowd fund it. You’re putting up barriers. Would you prefer to be dead, brain damaged or ok bu... View
Sport 6

Lisa Logue - 4 hours ago
I feel sorry for the staff expected to work outdoors in hazardous air quality. View
News 10

James Dof - 5 hours ago
Julie Macklin a lot of workplaces don't and won't install them, labouring the places aren't built and you are often required... View
Community 10

Each year as Australia Day approaches, I find myself feeling more and more uneasy about the celebration of the holiday...
News 130

It's been revealed that the large air tanker which went down Thursday afternoon with the loss of all those aboard...
Opinion 38

@The_RiotACT @The_RiotACT
The ACT's Australian of the Year, Katrina Fanning, was among the 25 per cent of national nominees for the major awards who are indigenous. A Reconciliation Australia breakfast in Canberra began the day, acknowledging a year of major achievements https://t.co/O2HOIGryKl (2 hours ago)

@The_RiotACT @The_RiotACT
ACT Emergency Services Agency (ESA) has advised landholders and residents in the Tharwa area to immediately activate their bushfire survival plan as a Watch and Act level grass and bushfire is burning out of control in Namadgi National Park. https://t.co/MkHvnOMCCo (3 hours ago)