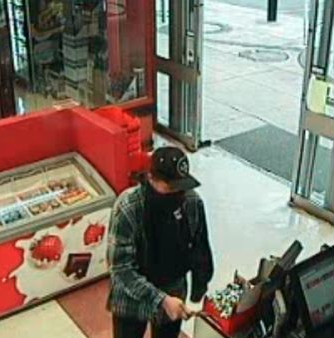 This in from ACT Policing:

ACT Policing has released a CCTV image of an alleged offender from the aggravated robbery of the Shop Rite supermarket in Griffith earlier this month.

Around 7.25pm on Tuesday, January 4, the male offender entered the supermarket on Barker Street, armed with a knife. He demanded money from the store register, and left with a sum of cash.

The male offender is described as Caucasian and approximately 183cm (6’) tall. He was wearing a long-sleeved white and grey-coloured flannelette shirt, dark pants, light-coloured shoes and a black baseball cap at the time of the robbery.

He was last seen getting into the front passenger side of a black Audi TT, which police located burnt out on Mugga Way in Red Hill on Thursday, January 6.

Anyone who was in the area of the Griffith shops around the time of the robbery, or can help identify the man in the image above is urged to contact Crime Stoppers on 1800 333 000, or via the Crime Stoppers website on www.act.crimestoppers.com.au. Information may be provided anonymously.

Jordan Amber - 43 minutes ago
Anthony Gordo the club has to diversify away from gambling based revenue business models and as part of the ACT Government re... View
Peter Morales - 4 hours ago
David Malcolm WTF should they View
Peter Morales - 4 hours ago
The kid's ain't got a chance to voice themselves against a drug and gambling organisation especially when their backed by loc... View
Community 3

Chiara Jane - 2 hours ago
Courtney keep an eye out for your neighbour! View
Katarina Vucic - 9 hours ago
Interesting 🤔 View
Janet Ilchef - 10 hours ago
Hannah left out the story of Dick on pogo sticks across the Harbour Bridge View
Lifestyle 8

@The_RiotACT @The_RiotACT
International students will not be returning to Canberra's major universities until mid-2022, but ANU and @UniCanberra are urging the government to allow them back on campus sooner https://t.co/XSLnGSiakN (40 minutes ago)