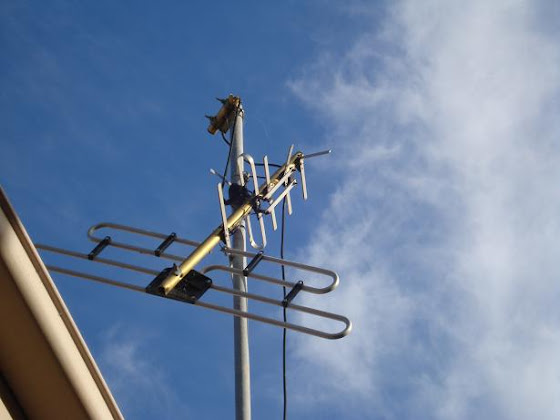 Our TV antenna was knocked off our roof during one of the recent storms.

Having never had any dealings with TV antenna guys before I’m looking for advice on:

1. How much – ball park figure – will a replacement antenna cost, including labour?

2. Does anyone have any recommendations? I live in Queanbeyan.

I would normally replace it myself, but am living overseas until February and the house-sitter desperately needs his fix of daytime TV.

We recently moved into our new house in Bonner and had got the 50 inch wall mounted.

The Signals where weak and we got the mob to look into the antenna as well.

All sorted and love watching the ashes series now !

http://www.canberracomms.com.au – I have got them bookmarked as well.

As someone who used to do some TV repair, one bit of advice I would offer is to get the antenna tech to measure the signal not just at the wall outlet, but also at the other end of the fly-lead where it plugs into your TV/Set-top Box/DVD recorder/whatever.

It’s very common to have a situation (especially after storms) where, if you still get bad reception, you assume that the TV tuner must be faulty (maybe a power surge?) since someone’s already tested the antenna, but it turns out to just be the short piece of cable running between the two.

The guy will probably have a good one in the back of his van for a couple of bucks which is a lot cheaper than getting a service call from a TV tech.

+2 for Kaz, friendly, reliable, i’ve dealt with them a few times over the years and it’s always been a pleasure

Thanks for the suggestions. Rabbit ears are a no go unfortunately and the house has more than one antenna outlet.

I think someone from Kaz’s is coming today, so it’s good to know in advance what the damage might be.

A simple replacement shouldn’t cost more than $300 including the antennae. I’ve used Kaz’s Electronics before and found them to be reliable and competent.

Depending where you are (Not sure about Queangers)but in O’Connor I just use rabbit ears and get good signal, as long as you are line of sight to Black Mountain, not many houses in my street have aerials on the roof (Although that could be a hippy O’Connor thing) Worth considering

Karina Widjaja - 3 hours ago
Lyneham ... spotted 3 💛🖤 View
Suzanne Lloyd - 3 hours ago
They are regular visitors in Latham. View
Janet Mulgrue - 4 hours ago
We had them in the bottle brush in Dunlop a couple of weeks ago View
News 46

rossau - 3 hours ago
Everyone owes money? Isn't that the real problem? View
News 15

Mathew McMahon - 7 hours ago
When the Electric switch's are turned off or on at the Belconnen Sub station an explosive noise is produced which echos acros... View
News 6

Lynn Stape - 9 hours ago
I dont normally agree with Rattenbury but as Canberra has already experienced a horrible toxic smoke filled summer , I would... View
News 26

noid - 9 hours ago
Our family have taken the train from Canberra to Sydney return a few times now and it is now my preferred transport option. I... View
Community 147

O L - 10 hours ago
Sadly I know the father of one of the boys killed here. They were driving back from the coast after a night fishing trip and... View
News 5

As I stand waiting for my order, Kate is continually fielding waves and honks from the cars that drive by....
Business 0

@The_RiotACT @The_RiotACT
The Bushfire Royal Commission is exposing how close the ACT came to losing some of our most endangered and vulnerable flora and fauna, and how a rapid response team is helping avoid further devastation during the fragile recovery stage https://t.co/ytdlpyegxF (1 hour ago)

@The_RiotACT @The_RiotACT
Shannon Noll visited the Bayldon Ag store in Queanbeyan this week to catch up with old mate Paul Nicholl. The popular Aussie singer has been in isolation during the past few months and was taking a break from dad duties https://t.co/K4e8dPFhnv (3 hours ago)

@The_RiotACT @The_RiotACT
The Canberra football community is uniting to help those less fortunate. A large initiative is underway to deliver educational supplies and books to children in need https://t.co/0PlJRl36Ym (5 hours ago)