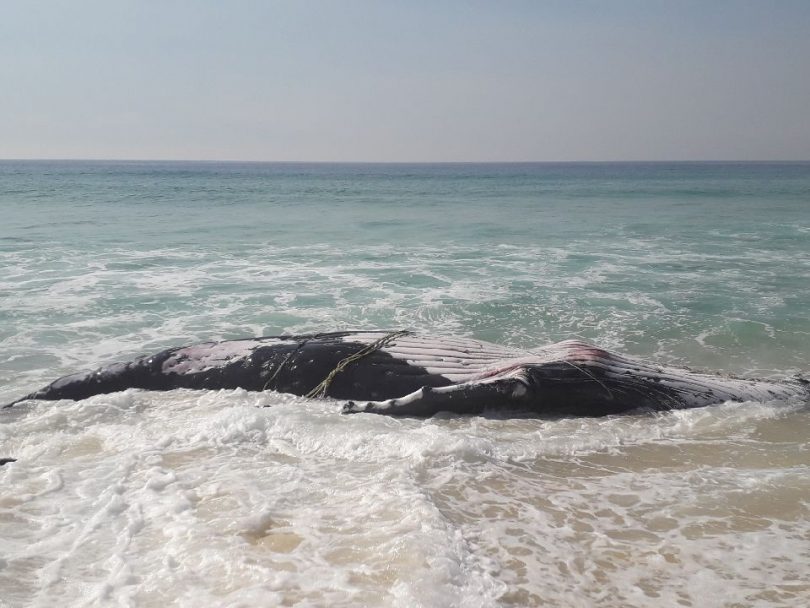 One of the most beautiful spots on the Far South Coast has been witness to an ugly intersection between man and nature.

A juvenile Humpback Whale has washed ashore dead on Long Beach (also known as Haycock Beach) at the northern end of Ben Boyd National Park, near the famous Pinnacles between Pambula and Eden.

Long Beach sits at the foot of the 65 million-year-old Pinnacles. The red and white colours of this geographical feature are a Sapphire Coast icon.

It’s said that the Pinnacles are a snapshot of earth’s history, with the white sands marking the level of an ancient water table, while the red gravel clay above is rusting iron oxide. As reported by The Riot ACT last week, Marine Rescue NSW had been asking boats going to sea to keep watch for a migrating whale entangling in marine debris.

The National Parks and Wildlife Service launched a surveillance flight out of Merimbula following sightings near Montague Island off Narooma 10 days ago but with no result.

It’s not clear if the tragedy discovered yesterday (September 17) on Long Beach is the whale in question.

“It was entangled in a rope buoy line which cut into one of its pectoral fins,” a National Parks spokesperson says.

“Removal and disposal options are now being determined, however, we have closed north Ben Boyd National Park while disposal is arranged.” A young humpback dead on Long Beach between Eden and Pambula. Sadly as numbers recover from the impacts of whaling so too does the number of entanglements in marine debris like ropes, fishing nets, and buoys. Photo: Janaya Chalker, NPWS.

According to the Wild About Whales website, “Humpbacks can travel up to 8 km/h but during their long migration journey they average only 1.6km/h, resting and socialising along the way.”

Sadly as numbers recover from the impacts of whaling so too does the number of entanglements in marine debris like ropes, fishing nets, and buoys. Sometimes these marine giants can shake free but if not, specialist whale rescues are deployed to take on the dangerous untangling task.

The Nationals Parks and Wildlife Service has one such rescue unit based in Nowra.

Once an entangled whale is located, buoys are attached to slow the animal down allowing rescuers to get closer to the whale and cut the obstacles free.

Sadly if an entangled whale can’t be found and helped, the pull of the extra weight can lead to exhaustion and injury.

To report whale entanglements or strandings call the NPWS Incident line on 1800 232 170 quoting your location and as much information as you can. Alex Dee - 46 minutes ago
It’s not, it’s only the noisy minority that are having a whinge about Canberra drivers.... View
Belinda Maiden - 55 minutes ago
I’m new to Canberra and have been surprised to find that: * P-platers seem to be allowed to drive at twice the posted speed... View
Alex Kearns - 1 hour ago
More presence might send a deterrent message. The current on road presence is minimal so the deterrent effect is minimal. The... View
Breaking 7

John Moulis - 49 minutes ago
Thank you to those people who have responded to my initial post. Since airing my experiences here and on Facebook it is clear... View
I am a Rabbit™ - 9 hours ago
The problem with the approach of the federal government was they were trying to reach a middle ground between not pissing off... View
chewy14 - 11 hours ago
You're assuming what he's saying is correct though. Whilst they do have controls to prevent vaccine "shopping" for people not... View
Property 23

Jason Hutty - 9 hours ago
Tim Van Der Vlist I'm not sure if you understand the economics of a member's club. The members own it. So yes, of course they... View
John Sands - 12 hours ago
John Ryan Steve Boege just means you should go to 19th hole and think about how you would have played... View
Fiona Wright - 12 hours ago
Irene Kelly greenkeepers made a mistake on the greens (in the article).. View
News 23