Unearthed Review: Sunchaser & the Wayward Orchestra. Four and a half stars 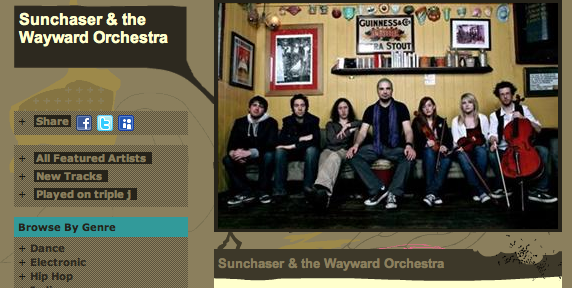 By popular request today we’re having a listen to Sunchaser & the Wayward Orchestra.

Amid the carnage of used coffee mugs, discarded pizza boxes and empty pale ale bottles Sunchaser & the Wayward Orchestra rose from their collective couch to record 6 fresh tracks of Celtic, Classical, Electro tinged Stadium rock songs. Although the ensemble is happy to describe themselves as a rock band with mini rock orchestra they also happily tread through the sound scapes of many genres, from the street corner barbershop vocals and Celtic rock electric violin in Paid to Smile to the religious zealot preacher ranting his way into the classical rock intro of Rescue. Sunchaser & the Wayward Orchestra place no limits when it comes to capturing the right sonic atmosphere for the vision of the lyrics.

Jason Campbell-Smith, Band front man and carnival ringleader for this collective of like minded souls was awarded 1st and 3rd place in the rock/indie category at the 2008 Australian Songwriter Association Awards. He also took out ‘Songwriter of the Year’ the highest honour for new original songwriters. The band performed live at the highly prestigious event which has since been broadcasted on Australian TV.

The band has also received:
– Airplay on Australian and International Radio.
– Song placement on the ‘ASP International Surfing Tournament 2007’ broadcasted to 275 million people worldwide, including Free-To-Air & Cable TV in Australia, as well as the US, Japan, Europe and South Africa.
– Several top 5 positions in international Song Contests.

Do you like old Bon Jovi records? If you ever waved a lighter in a stadium you’re really going to like Sunchaser & the Wayward Orchestra.

The recording might sound a little scratchy at first, but suits the music well.

This is great stuff, redolent of 70s rock anthems, and very well arranged to take advantage of classical instrumentation.

David Pollard - Independent for Yerrabi 2020 - 7 hours ago
Kylie Robinson I’m concerned with mental health support for young people, particularly - but not only - through schools. I... View
Jack Hearps - 12 hours ago
Christopher Stuart Veilands compared to other authorities ... shires etc ... ok.... View
Jack Hearps - 12 hours ago
Bethany Williams your very aware ... the LP is not what it was progressing to be ... it has been taken over by the religious... View
Business 4

Lin Van Oevelen - 17 hours ago
Julie Maynard I know. You're preaching to the converted. :) View
Lin Van Oevelen - 22 hours ago
Kevin Hodder It has long been known that the infection fatality rate is significantly lower than the case fatality rate. Late... View
Darron Marks - 23 hours ago
And how many people can go and get this blood test ? I would personally like to know if I have any antibodies for it ?... View
Food & Wine 5

Kosher Ayatollah - 18 hours ago
Robson Rotation is why we need so many corflutes. Candidates are fighting within their own parties for recognition, not the p... View
News 2

Tara Murray - 21 hours ago
Jason Livingstone not to mention the cull after that which in my opinion wasn’t necessary... View
Jason Livingstone - 22 hours ago
What was the number of wildlife lost due to the fires? 2020 has not been good to wildlife.... View
ACT Election 5

Canberrans will soon be able to fly direct to the holiday destinations of the Sunshine Coast and Cairns, and direct...
Opinion 94

@The_RiotACT @The_RiotACT
Canberra Milk has stepped up to be the major sponsor of the Raiders for the 2021 season, filling the gap left by telco Huawei. For nostalgia buffs, it's sure to reignite the fondest memories of the Raiders' glory days https://t.co/eV6alU6Al1 (27 minutes ago)