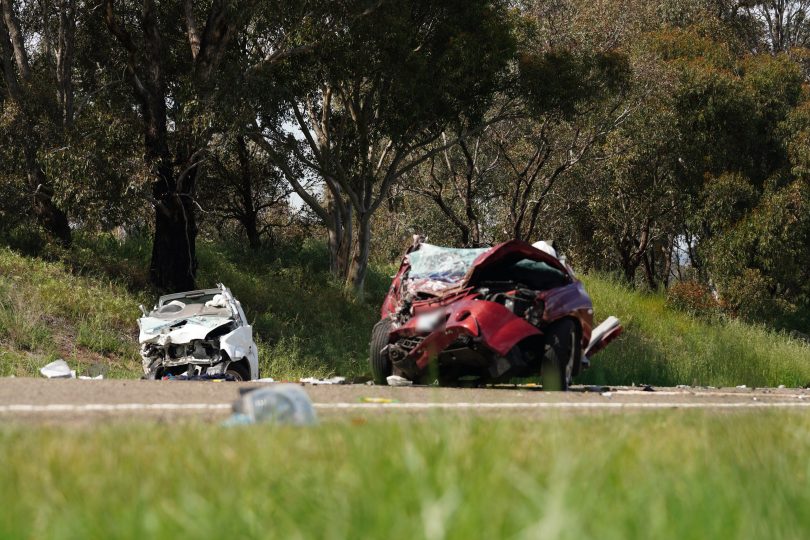 Two people have been transported to The Canberra Hospital following the accident on William Hovell Drive. Photo: ACT Policing.

12 October, 4:15 pm: ACT Policing would like to speak to the driver of a black 4WD/SUV that was travelling southbound on William Hovell Drive at 7:30 am this morning.

It is believed the driver narrowly avoided the collision that has left two people in critical condition in The Canberra Hospital.

Police believe the person potentially holds vital information that could assist with their investigation.

Police are also seeking witnesses to an accident that occurred in Anketell Street, Greenway.

At about 10:20 am today, ACT Policing responded to reports that a pedestrian had been struck by a vehicle.

The pedestrian was assessed by ACT Ambulance Service paramedics before being transported to hospital for treatment of non-life-threatening injuries.

12 October, 11:00 am: ACT Policing expects William Hovell Drive to be closed until at least lunchtime today as the Major Collision Team continues its investigation into this morning’s accident between Drake Brockman Drive and Coppins Crossing Road in Hawker.

Detective Inspector Marcus Boorman said the accident occurred at around 7:30 am. Each car had a single occupant and ACT Fire & Rescue took around 90 minutes to free the occupants of both vehicles. They were then transported to The Canberra Hospital.

He said the drivers of both cars are in a “critical and very serious condition”.

Anyone with dashcam footage is urged to contact ACT Policing on 1800 333 000 or visit Crime Stoppers ACT.

12 October, 10:10 am: Long traffic delays are expected on William Hovell Drive today after a serious two-car accident was reported at around 8:00 am.

ACT Fire & Rescue completed rescue operations at the site at around 10:00 am and two people have been transported to hospital by the ACT Ambulance Service.

The community is advised to continue to avoid the area.