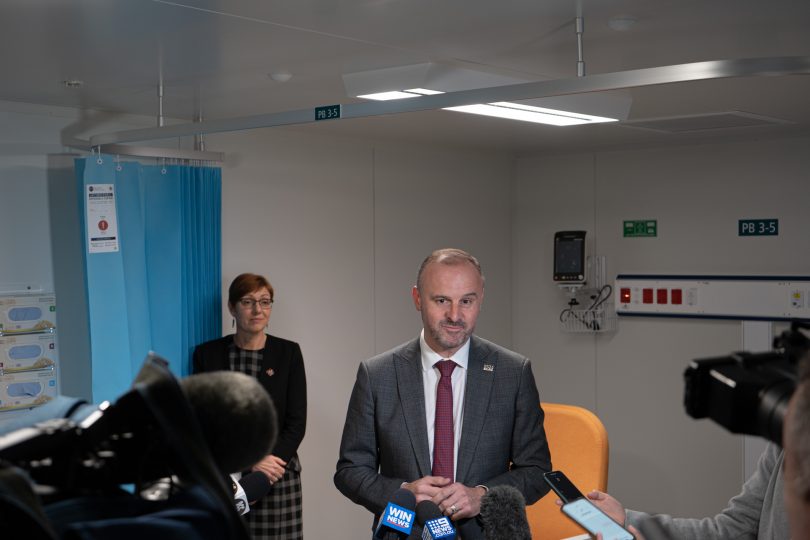 The ACT is continuing negotiations with the Commonwealth for extra Pfizer stocks following yesterday’s change in the vaccine rollout, with new advice recommending people between 50 and 59 now preference the Pfizer jab.

The revised rollout means people between 30 and 39 will have their eligibility pushed back, but it would not be by “months and months”, Chief Health Officer Dr Kerryn Coleman said.

The ACT’s COVID-19 booking line no longer accepts appointments for the AstraZeneca vaccine for people aged 50 to 59 years after updated health advice has shepherded the age group towards the Pfizer vaccine.

The ACT current receives around 6000 to 7000 doses of Pfizer from the Commonwealth every week, but this is expected to increase in the coming weeks depending on supply.

Chief Minister Andrew Barr said the ACT Government is continuing to negotiate with the Federal Government over increased Pfizer stocks after Health Minister Rachel Stephen-Smith said supply projections from the Commonwealth were not where the ACT wanted them last week.

“Everyone is asking for more so the ultimate capacity to deliver is what can be imported into Australia,” Mr Barr said.

“It does present a further challenge in the delivery of the vaccination program.

“It is not the first challenge we have faced; I do not think it is going to be the last one either.” 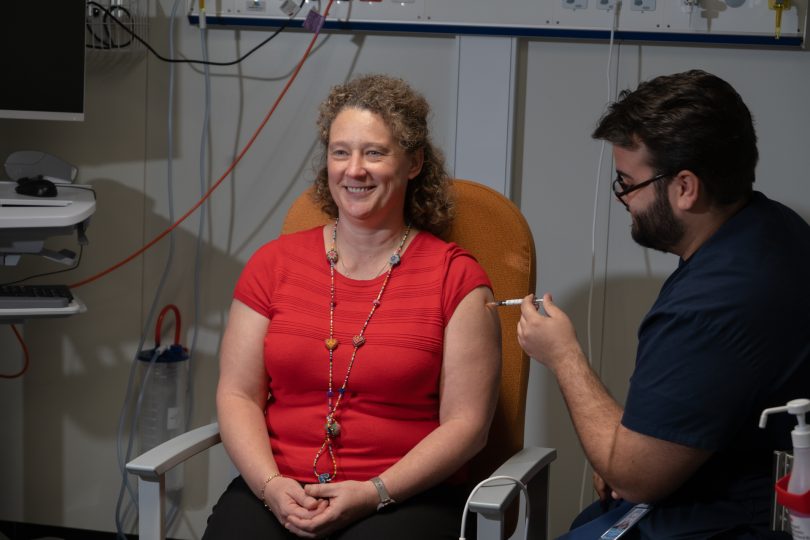 People under the age of 39 will have to wait a little longer to get vaccinated, Chief Health Officer Dr Kerryn Coleman said. Photo: Dominic Giannini.

The Commonwealth Government said around 1.7 million Pfizer doses will arrive in Australia this month and a further 2.8 million doses are expected in July.

Around 40 million doses are expected to arrive by the end of the year on top of shipments of the Moderna vaccine which is scheduled to arrive in the final quarter of the year.

The number of clinics administering Pfizer will also ramp up.

Around 30,000 people between 50 and 59 in Canberra who are yet to be vaccinated will now need to book in for a Pfizer appointment if they wish to get the jab.

Those in this age group are being asked to remain patient over the next few days and not contact the COVID-19 booking line as the ACT Government works to open more appointments at the Garran vaccination clinic.

The government is rescheduling people who were booked in to receive the AstraZeneca vaccine before further bookings are made available for people aged between 50 and 59.

People who have already received their first AstraZeneca dose without serious adverse side effects are encouraged to still show up for their second jab.

Currently, there is only one Pfizer clinic, operated by the ACT Government at Garran, but plans continue for a second Pfizer hub depending on the supply of the vaccine.

GPs will soon be able to administer the Pfizer jab, but details around when this will begin remain scarce and its organisation remained in the hands of the Commonwealth Government, Dr Coleman said.

Mr Barr said under the revamped rollout, more Canberrans would become fully vaccinated sooner in the ACT given that people only need to wait three weeks between the two Pfizer jabs, compared to around three months for AstraZeneca.

For more information about COVID-19 and the vaccine’s rollout in the ACT, visit www.covid19.act.gov.au.