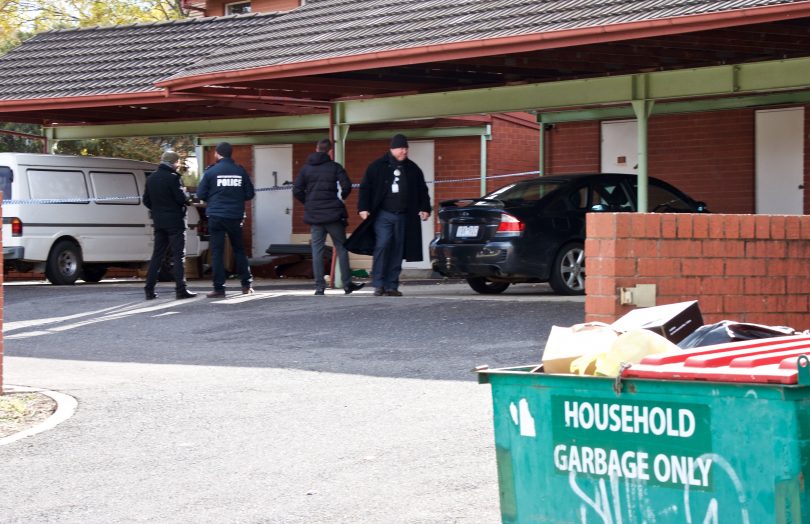 Police at the scene of a shooting murder in Mansfield Place, Phillip. Photo: Michael Weaver.

Police have still not released the name of a 48-year-old man shot on the doorstep of his Phillip townhouse last week.

The incident occurred at the end of a cul-de-sac in Mansfield Place at about 11:45 pm on 11 June. The man died from a single gunshot wound shortly after one or more people knocked on the door of his home.

Over the weekend, ACT Policing conducted a line search of grassland in Mawson as part of the ongoing investigation.

The search included general duties, police maritime, and search and rescue officers and was held on the Mawson side of Yarralumla Creek. They would not comment on whether anything was found.

Police have also appealed to anyone with information or dash-cam footage of the area from around the time of the incident to contact Crime Stoppers on 1800 333 000, or via the Crime Stoppers ACT website, quoting reference 6821216. Information can be provided anonymously.

Detective Inspector Marcus Boorman said a woman inside the home at the time of the shooting called the ACT Ambulance Service. Ambulance officers treated the man at the scene before taking him to hospital where he died a short time later.

“We have located a number of items of evidence that we will be forensically examining, and we are also following a number of avenues of enquiry,” Det Insp Boorman said.

Det Insp Boorman would also not be drawn on links to Operation Ironside that led to the arrest of 224 offenders on 526 charges in every mainland Australian state following the Australian Federal Police-led operation.

Police have yet to locate the weapon and Det Insp Boorman was unable to say whether the gunshot wound was at close range.

A police spokesperson said there was no threat to public safety.