Last week we previewed the running of a night cycling race in the soon to be completed empty streets of Crace.

Andrew Collins has sent in video of the event, which ended up with 79 hardy competitors.

There’s also a lot of brilliant photography on the Vikings Cycling Forum. 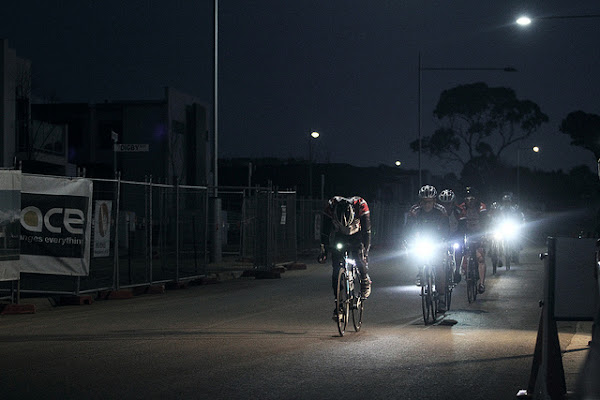 UPDATE: And here’s the race report:

A big thankyou to the developers of Crace, and Major Sponsor: Crace Joint Venture, who provided excellent support to the organisers.
http://www.crace.com.au/

The racing was conducted on a tight 800m circuit, with 4 90 degree turns. Most grades were stretched out in single file, with overtaking very difficult. Riders with good cornering skills were rewarded.

For the spectators, it was hard to tell the riders apart, because in the dark they all looked like a bike headlight.

Riders were out of the saddle after every corner. This meant that the B-grade riders had to do around 200 short sprints throughout their race. This proved too much for most participants, with only 3 finishers in B-grade. Congratulations to Ian Downing on his impressive win. Perhaps a promotion is required for Mr. Downing?

It was great to see so many female participants, especially in the lower grades. I hope we see these riders returning for future local races.

Luckily, there were no crashes involving competitors.

The Lucky Door Prize, of a 1000 lumen bike light, supplied by NiteLights was won by Michael Milton. Milto was at more of a disadvantage than usual, because of the four 90 degree right-hand turns.
http://www.nitelights.com.au/

There was prize money for 1st, 2nd and 3rd. Winners that did not collect their prizes on the night will be contacted to arrange prize money collection.

Well done all. Shame about the out of focus video though…

Imagine the outrage if they were motorbikes rather than pushbikes.

Imagine the outrage if they were motorbikes rather than pushbikes.

Maryjane Lalliard - 17 minutes ago
Louise Anne I will come with you - we could have a cup of tea 🫖 😊 View
Chiara Jane - 4 hours ago
Courtney keep an eye out for your neighbour! View
Katarina Vucic - 11 hours ago
Interesting 🤔 View
News 44

Ol L - 5 hours ago
While the sun shined they didn’t put $ aside for a rainy day and now there crying poor. View
Food & Wine 23