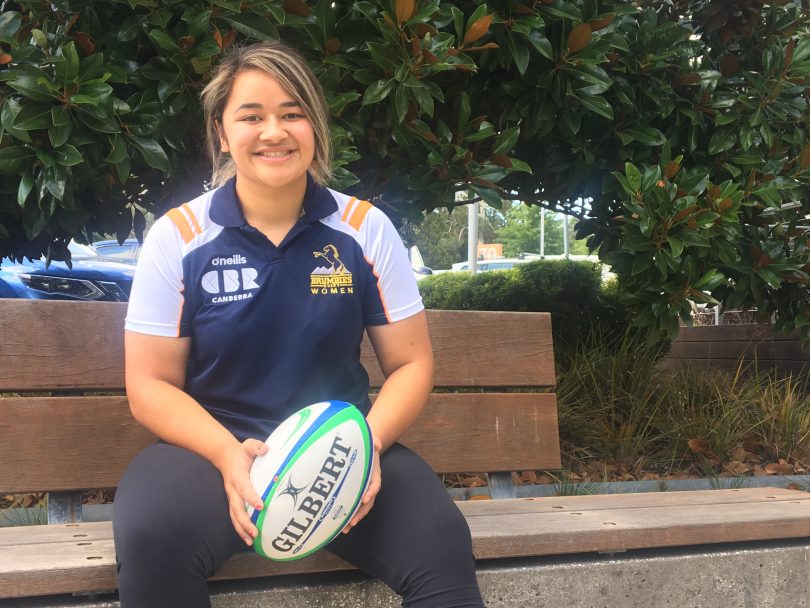 Violeta Tupuola has a big smile, a big heart and an even bigger tackle. Photo: Lachlan Roberts.

Violeta Tupuola has changed a lot since she played her first rugby union match as a 17-year-old. Even she admits she doesn’t recognise her teenage self.

“In my first ever rugby game, I broke a girl’s collarbone and I just burst into tears. I wasn’t even hurt but I was crying because I felt so bad,” she shared.

The teenager who was afraid of contact and getting hurt is a distant memory for the girl now affectionately dubbed Wrecking Ball by her Brumbies teammates. Even her teammates laugh when she tells them she played netball growing up.

“To be fair, if I had met myself three years ago, I wouldn’t recognise myself. I was shy back then and very much in my own bubble. Its cliche, but rugby has changed my life and made me a different person,” she said.

A country girl at heart, Tupuola was born in Griffith, NSW, and her family moved to Canberra when she was 12 to help her two brothers pursue their careers in the Raiders’ juniors setup. A self-confessed ‘girly’ girl, the idea of playing rugby was the last thing on her mind.

“I hated contact sport and I hated the idea of running into people,” she said. “I was a very shy girl and I moved to a new school when I was 17. A bunch of girls approached me at school and said I should try out with their rugby side. I agreed because I wanted to make new friends.”

While she was crying on the sideline, a Brumbies scout had noticed the kind-hearted prop and offered Tupupola an opportunity with Brumbies. Her rugby career has come leaps and bounds since then.

In just her second year from switching sports to playing rugby, she was named in the Wallaroo squad to play in the 2017 World Cup and the following year played for the Brumbies in the inaugural Super W season.

“Not only was it a great rugby lesson, but it taught me life lessons as a fresh 19-year-old.

Last year was cruelled by a series of injuries, with a troublesome knee, concussion and shoulder injury stopping her from playing the entire season.

While her short-term goals are to inspire the Brumbies to Super W success and to return to the Wallaroos setup, in the long-term she wants to be an example for the other young girls wanting to pursue their dreams of playing the sport they love.

“Women’s rugby is slowly getting there with baby steps. It is going to take time but I’m glad that I’m young now so that when I am older, rugby will have grown and the younger girls will have a pathway,” she said.

“I hope one day the women’s game will be as popular as the men’s. It might take ten years until women are getting paid and they get the same treatment as men. That is all I wish for.”

Why Brumbies’ Sammie Wood wears a yellow ribbon in her hair

‘Written off’: Brumbies to show they are Super W contenders, not pretenders

@The_RiotACT @The_RiotACT
After overseeing a decade of changes in community banking, Neale Guthrie has announced his retirement https://t.co/5dJJGN4Iy1 (4 minutes ago)