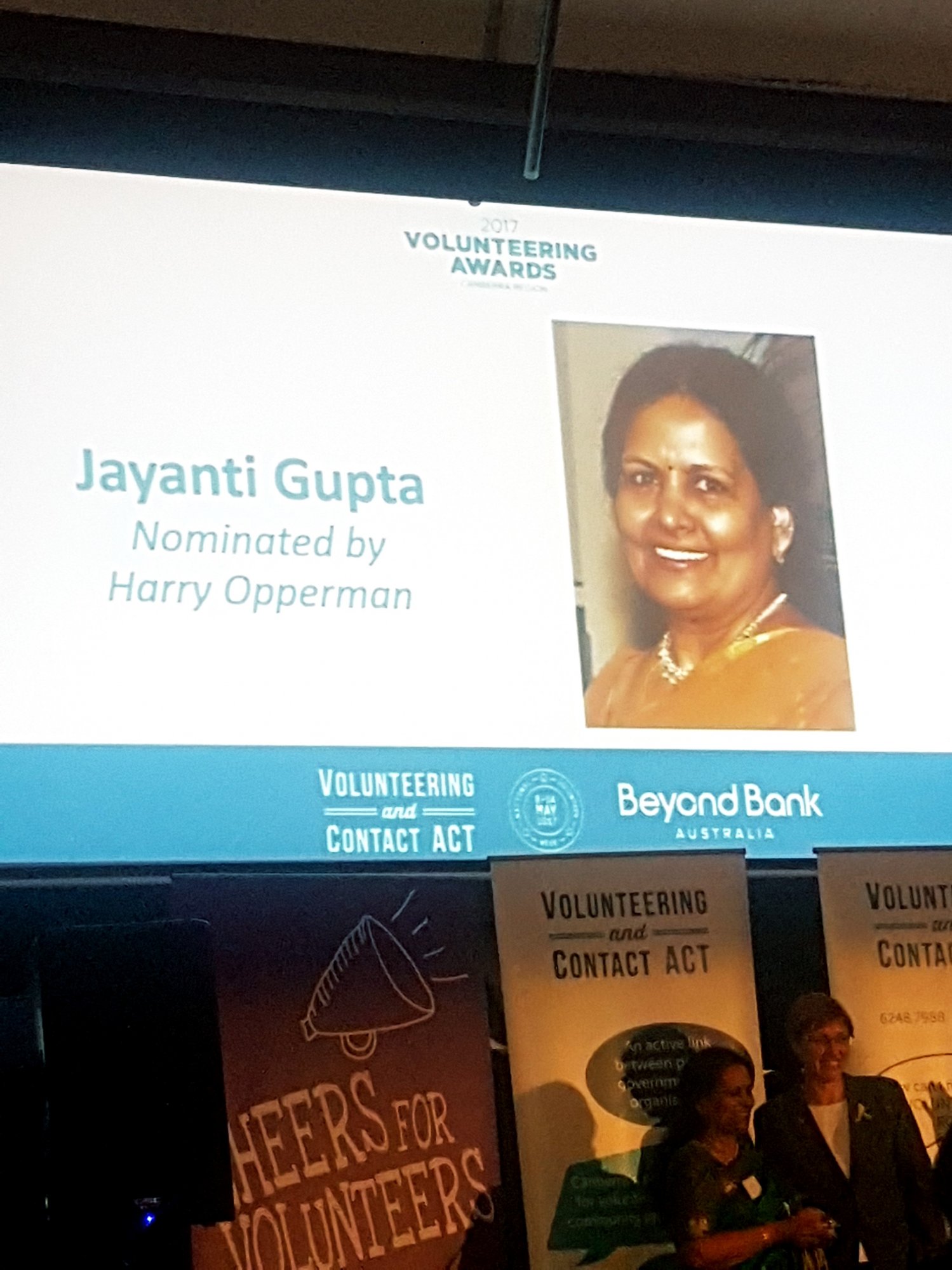 Across this city, each day and each week, thousands of people volunteer their time to care for people, nurture the environment, enliven our city through cultural activity, support our community sporting events, look after animals and many other activities. Canberrans are some of the most generous volunteers in the country and while many of us make some contribution, there are a special few that make extraordinary efforts.

These are the people who were honoured at the ACT Volunteer Awards in a fantastic event held at the Canberra Arboretum on Monday evening. The night, hosted by Volunteering and Contact ACT and sponsored by Beyond Bank was a special opportunity to honour, celebrate and thank these extraordinary people doing extraordinary things.

Individuals honoured included Jayanti Guptia who was named the 2017 Volunteer of the Year, for her work across a range of community organisations including the Canberra Multicultural Community Forum Inc, the Canberra Interfaith Forum, and 2XX, and for her efforts in supporting women to connect with the services that they need. The Senior and Junior Volunteers of the Year were both recognised for their efforts working with St Vincent de Paul. These awards recognised Linda Barry and Kate Barton who have both given thousands of hours and helped thousands of people young and old who have needed a support and services.

The driving force behind the Cancer Council’s ACT Relay for Life events for the last twenty years, Rosemary Drabsch was recognised with the Profound Influence Award. The Innovation Award recognised Orange Sky Laundry Canberra, that provides laundry services and support to people living on the streets around Canberra.

Not often do you think about comedy and volunteering but Juliet Moody was recognised with the Thought and Leadership Award for establishing the Fearless Initiative which aims to unite comedians against family violence through comedy events. The Go Beyond Award recognised Mark Bell and the Canberra’s Choice Award went to the ACT Volunteers in Policing Program.

The final award was the Volunteer Team of the year that recognised the Hartley Hall Markets Volunteer Team, for their work to enable the Markets to go ahead each month.

This was an inspiring night, where we heard the stories of the impact these people made on the lives of others. It also recognised the uniqueness of volunteering, with research showing that volunteers live happier and healthier lives that than those who do not volunteer, reflected in the theme of this year’s National Volunteer Week ‘Give Happy, Live Happy’. As CEO of Volunteering and Contact ACT, Glenda Stevens noted, ‘everyone wins when someone volunteers – the individual, organisations and the whole community’.

If you are feeling inspired, think about getting involved. Volunteering and Contact ACT is Canberra’s go-to organisation if you want to find out about volunteer opportunities in your local community. You can drop in at the open day on Tuesday 9 May at the Canberra Centre or jump onto the website www.vc-act.org.au to find out more.

Chrissto Melba - 24 minutes ago
I agree, all feral pests in the National Park should be eradicated. Deer, Horses Pigs, Dogs, Foxes, Cats, Rabbits at least. I... View
Meredith Felkel - 3 hours ago
There is now supposed to be 25000 horses. Which idiot came up with theses ridiculous figures.... View
Meredith Felkel - 3 hours ago
Why do you all blame BRUMBIES. You are so narrow minded. WHST ABOUT PIGS. LOTS UP IN KNP AND Deer. Wake up you silly narrow m... View
News 41

Lani Nicholson - 38 minutes ago
As if it wasn’t sad enough already 😢😢😢😢 View
Deborah Field - 1 hour ago
Tragedy on tragedy... 😭 View
Agnes Kumar - 2 hours ago
Could things get any worse? View
News 10

Ken Quilty - 3 hours ago
Trev Astle nothing mechanical, just structural damage in the roof, A-pillars & B-pillars will do it though View
Trev Astle - 5 hours ago
How does hail damage to skin of car effect the actual mechanical go part of a car. It doesn't! Get a new windscreen and just... View
Bianca Lorenne - 5 hours ago
Julie Macklin yes because standard of living is more important than a daily commute to many 🤷🏻‍♀️ View
News 35

Chrissto Melba - 6 hours ago
What about Coda Conduct? A couple of Canberra girls doing well for themselves. I voted for one of their songs in the Hottest... View
show more show less
*Results are based on activity within last 7 days

@The_RiotACT @The_RiotACT
The fires in the high country brought massive damage to orchards, farms & tourism but the region’s cooperative spirit has come to the fore as the road to recovery begins https://t.co/iAzcyzYI13 (4 hours ago)