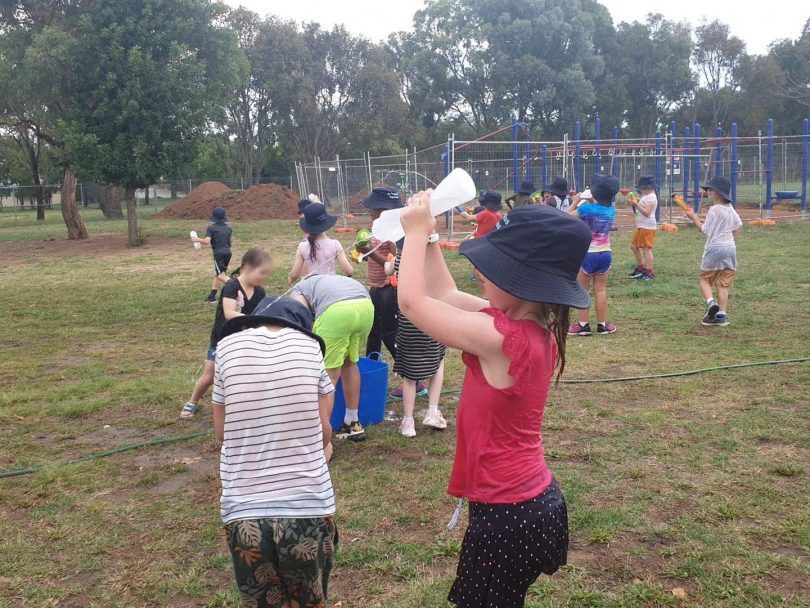 The St Thomas Aquinas playground where a section of PFAS affected ground has been fenced off. Photo: Facebook.

A Belconnen school is waiting on further investigations into toxic fire fighting foam contamination on its grounds before embarking on a remediation process that involves putting a barrier between the affected earth and a layer of new soil and turf.

St Thomas Aquinas Primary School in Charnwood has been dealing with the finding of per-and poly-fluoroalkyl substances (PFAS) in its playgrounds since the middle of last year when the Catholic Education Office had the site tested after parents raised concerns.

The school is adjacent to the former West Belconnen Fire Station site, which the government sold and was developed into a childcare centre. That is one of several sites being investigated for PFAS contamination.

PFAS was a commonly used substance in firefighting foam in NSW and the ACT, and was used for training purposes at ACT Fire and Rescue sites. It has been linked to chronic illnesses, cancer and infertility.

Last year, its work confirmed PFAS at levels above the recommended threshold for ecological and/or human levels at all sites and areas adjacent to the former Charnwood fire station, including the school and Ginninderra Christian Church, according to a post-election briefing to Emergency Services Minister Mick Gentleman.

More work is required and EPSDD Deputy Director-General Geoffrey Rutledge said the 2020-21 Budget allocated more than $2.2 million to conduct the next stage of investigations and risk assessments at these sites, including the implementation of interim measures such as fencing and signage to mitigate any exposure risk.

Catholic Education Director Ross Fox said two areas of the school grounds were affected, a 10-metre deep strip along the boundary with Little Ducklings Childcare Centre and a smaller four-by-four metre section about 20 metres from the school buildings.

These areas had been fenced off last August on advice from the Chief Health Officer Dr Kerryn Coleman, but she had also said it was unlikely that the level of PFAS posed a risk to human health.

“Children would have to repeatedly eat large amounts of soil, without vomiting, to produce elevated levels of PFAS within their system. It is highly unlikely that a child’s stomach would accommodate such material without vomiting or regurgitation occurring as a natural reaction,” she wrote in a letter to the school. 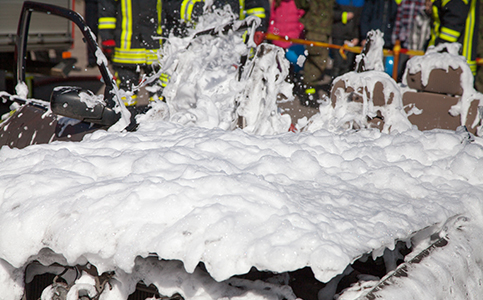 Mr Fox said the school did not grow fruit or vegetables in the affected areas, there was no watercourse and there did not appear to be a pathway for the PFAS to get into bodies.

It was not known how the PFAS got to be so far from the boundary.

The school was now hoping to combine remediation, paid for separately by the ACT Government, to develop new playing spaces and a new Early Learning Centre.

Mr Fox said unless the ongoing investigations found the contamination was more serious, the school planned to lay geo-fabric as a barrier over the affected areas, then cover with a 30 cm layer of soil and turf so “any risk of interaction with the PFAS contaminated material is removed”.

The school, which was keen to reclaim its playing space, hoped this could proceed in the next two to six months.

But if the advice were otherwise, the affected material would have to be removed and disposed of.

“We continue to work with the relevant governmental and ACT authorities to ensure that the site is safe at all times and all risks are appropriately managed and minimised for students, staff and community,” Mr Fox said.

Forrest residents Rebecca Scouller and her partner have been pursuing the government for more information on the Forrest Fire Museum situation for years, with a Freedom of Information request currently in train to discover the results of GHD’s testing last year.

The couple bought their Fitzroy Street property near the Museum nine years ago after vague assurances from the then government. They have been seeking more information ever since to no avail.

She acknowledges they may be a lower priority, given the station was retired in 1983, compared with the school and childcare centre, but they still had a right to know what the situation was.

“There are a whole lot of things we don’t know and we just want an answer,” she said.

Mr Rutledge said the ESA has been engaging with staff, volunteers and unions regarding investigations to date at these sites and would continue to do so as further investigations progress.

“This engagement has included informing stakeholders about the testing activity at current sites, as well as providing information about PFAS provided by the Australian Government Department of Health,” he said.

If you have concerns about PFAS, visit PFAS.gov.au.

‘It has been linked to chronic illnesses, cancer and infertility.’ Can you please provide the source for this information?

Lewis P Owlay - 2 hours ago
Worked a treat View
HiddenDragon - 6 hours ago
Unless there's a strong likelihood that the scheme will be re-run, with a somewhat larger budget next time, it might be bette... View
chewy14 - 6 hours ago
There's definitely a lot of spin going on from the government here but precious little transparency. The data is clearly now... View
Community 52

Jason Richards - 6 hours ago
How about tougher laws on the fruit bats riding three wide on unbroken lines... View
Ol L - 7 hours ago
Stupid. Increasing fines won’t stop anything. Look at the near annual fine increases for speeding. View
James Forge - 7 hours ago
Grant Rixon I'm not saying that. I'm against cyclists flouting the current law by not slowing town to... View
Property 3

sammo1 - 8 hours ago
It almost already is! Most of the population work and shop in Canberra or Queanbeyan. Its really not that far out.. It seems... View
consumeradvocatecanberra - 11 hours ago
Hmm, what a great place for a satellite city for Queanbeyan or even Canberra (thinking Oaks Estate-perhaps not workable) but... View
MERC600 - 11 hours ago
It's been quite a while since I wandered into the Captains Flat local. Back then they were only using one corner of the place... View
Food & Wine 5

Julie Macklin - 10 hours ago
Flannelette shirt. That's all I have known them called and what I have always called them. Never hard of the other words befo... View
show more show less
*Results are based on activity within last 7 days

@The_RiotACT @The_RiotACT
ARIA award-winning superstars, multi-state indie supergroups and local legends - oh my! All that and more in this week's #GigGuide https://t.co/eFn9yY4gw0 (2 hours ago)

@The_RiotACT @The_RiotACT
Indian Myna birds have been declared a pest species by the ACT Government due to their environmental and health impacts. It's part of an effort to reduce the population of the invasive species in the Territory https://t.co/BAb0ctQyAl (3 hours ago)

@The_RiotACT @The_RiotACT
The Canberra Region @TruffleFest is more than a celebration of Tuber melanosporum, it highlights the best food and wine the region has to offer. Here are some events you won't want to miss https://t.co/zaKealFux0 (4 hours ago)